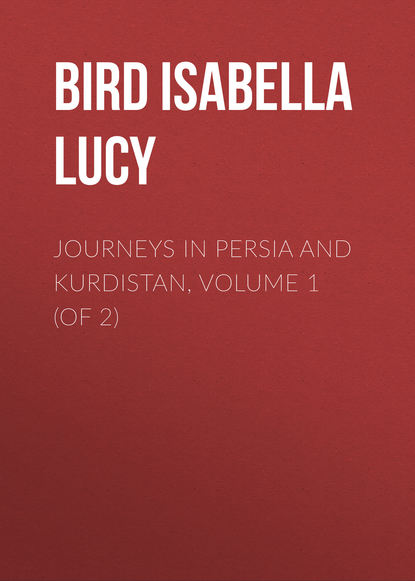 Isabella Bird
Journeys in Persia and Kurdistan, Volume 1 (of 2)

Journeys in Persia and Kurdistan, Volume 1 (of 2)
Isabella Bird

Journeys in Persia and Kurdistan, Volume 1 (of 2) / Including a Summer in the Upper Karun Region and a Visit to the Nestorian Rayahs

The letters of which these volumes are composed embrace the second half of journeys in the East extending over a period of two years.[1 - I left England with a definite object in view, to which others were subservient, but it is not necessary to obtrude it on the reader.] They attempt to be a faithful record of facts and impressions, but were necessarily written in haste at the conclusion of fatiguing marches, and often in circumstances of great discomfort and difficulty, and I relied for their correction in the event of publication on notes made with much care. Unfortunately I was robbed of nearly the whole of these, partly on my last journey in Persia and partly on the Turkish frontier, – a serious loss, which must be my apology to the reader for errors which, without this misfortune, would not have occurred.

The bibliography of Persia is a very extensive one, and it may well be that I have little that is new to communicate, except on a part of Luristan previously untraversed by Europeans; but each traveller receives a different impression from those made upon his predecessors, and I hope that my book may be accepted as an honest attempt to make a popular contribution to the sum of knowledge of a country and people with which we are likely to be brought into closer relations.

As these volumes are simply travels in Persia and Eastern Asia Minor, and are not a book on either country, the references to such subjects as were not within the sphere of my observation are brief and incidental. The administration of government, the religious and legal systems, the tenure of land, and the mode of taxation are dismissed in a few lines, and social customs are only described when I came in contact with them. The Ilyats, or nomadic tribes, form a very remarkable element of the population of Persia, but I have only noticed two of their divisions – the Bakhtiari and Feili Lurs. The antiquities of Persia are also passed over with hardly a remark, as well as many other subjects, which have been "threshed out" by previous writers with more or less of accuracy.

I make these omissions with all the more satisfaction, because most that is "knowable" concerning Persia will be accessible on the publication of a work now in the Press, Persia and the Persian Question, by the Hon. George N. Curzon, M.P., who has not only travelled extensively in the country, but has bestowed such enormous labour and research upon it, and has had such exceptional opportunities of acquiring the latest and best official information, that his volumes may fairly be described as "exhaustive."

It is always a pleasant duty to acknowledge kindness, and I am deeply grateful to several friends for the help which they have given me in many ways, and for the trouble which some of them have taken to recover facts which were lost with my notes, as well as for the careful revision of a portion of my letters in MS. I am indebted to the Indian authorities for the materials for a sketch map, for photographs from which many of the illustrations are taken, and for the use of a valuable geographical report, and to Mr. Thistleton Dyer, Director of the Royal Botanic Gardens at Kew, for the identification of a few of my botanical specimens.

In justice to the many kind friends who received me into their homes, I am anxious to disclaim having either echoed or divulged their views on Persian or Turkish subjects, and to claim and accept the fullest responsibility for the opinions expressed in these pages, which, whether right or wrong, are wholly my own. It is from those who know Persia and Kurdistan the best that I am sure of receiving the most kindly allowance wherever, in spite of an honest desire to be accurate, I have fallen into mistakes.

The retention, not only of the form, but of the reality of diary letters, is not altogether satisfactory either to author or reader, for the author sacrifices the literary and artistic arrangement of his materials, and however ruthlessly omissions are made, the reader is apt to find himself involved in a multiplicity of minor details, treated in a fashion which he is inclined to term "slipshod," and to resent the egotism which persistently clings to familiar correspondence. Still, even with all the disadvantages of this form of narrative, I think that letters are the best mode of placing the reader in the position of the traveller, and of enabling him to share, not only first impressions in their original vividness, and the interests and enjoyments of travelling, but the hardships, difficulties, and tedium which are their frequent accompaniments!

For the lack of vivacity which, to my thinking, pervades the following letters, I ask the reader's indulgence. They were originally written, and have since been edited, under the heavy and abiding shadow, not only of the loss of the beloved and only sister who was the inspiration of my former books of travel, and to whose completely sympathetic interest they owed whatever of brightness they possessed, but of my beloved husband, whose able and careful revision accompanied my last volume through the Press.

Believing that these letters faithfully reflect what I saw of the regions of which they treat, I venture to ask for them the same kindly and lenient criticism with which my travels in the Far East and elsewhere were received in bygone years, and to express the hope that they may help to lead towards that goal to which all increase of knowledge of races and beliefs tends – a truer and kindlier recognition of the brotherhood of man, as seen in the light of the Fatherhood of God.

Farsakh, from three and a half to four miles.

Gaz, a sweetmeat made from manna.

Gholam, an official messenger or attendant.

Hammam, a Turkish or hot bath.

Ilyats, the nomadic tribes of Persia.

Imam, a saint, a religious teacher.

Istikbal, a procession of welcome.

Kafir, an infidel, a Christian.

Kalian, a "hubble-bubble" or water-pipe for tobacco.

Kanat, the upright side of a tent.