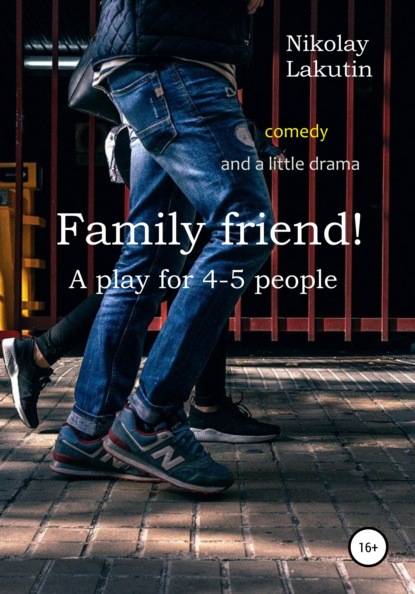 Nikolay Lakutin
Family friend! A play for 4-5 people. Comedy and a little drama

Family friend! A play for 4-5 people. Comedy and a little drama
Nikolay Lakutin

Are you familiar with such a phenomenon as simple-minded arrogance? Sometimes you meet such amazing characters in your life, which you try to keep away from yourself, but as luck would have it, they are attracted so close that it already goes beyond all boundaries. Meet the "Family Friend"!

Family friend! A play for 4-5 people. Comedy and a little drama

ATTENTION! ALL COPYRIGHTS TO THE PLAY ARE PROTECTED BY THE LAWS OF RUSSIA, INTERNATIONAL LEGISLATION, AND BELONG TO THE AUTHOR. IT IS PROHIBITED TO PUBLISH AND REPUBLISH IT, REPRODUCE IT, PERFORM IT PUBLICLY, TRANSLATE IT INTO FOREIGN LANGUAGES, OR MAKE CHANGES TO THE TEXT OF THE PLAY WHEN IT IS STAGED WITHOUT THE WRITTEN PERMISSION OF THE AUTHOR. THE PLAY CAN ONLY BE STAGED AFTER A DIRECT CONTRACT IS CONCLUDED BETWEEN THE AUTHOR AND THE THEATER.

Play for 4 or 5 people "Family Friend»

The role of Pantelei can be combined, if necessary, with the role of Gena or Stasik.

The lyric introduction – the musical theme of the play (the composition "Yuri Tarasenko and Victoria Artyukhova – You are here and I am now" is recommended) is played until 1 minute 45 seconds, then the speech of the actors begins.

So, the music starts playing, after a few seconds, the curtain opens.

The evening square conveys its atmosphere of warmth of a tired city.

In the square there is a bench, around nature, freedom, spacious and easy. A street lamp is dimly lit.

With a tired step, but with a happy face, practically dragging a lady's purse on the floor, Albina enters the stage. She's coming home from work. He takes a few steps, stops, remembers something, remembers pleasant moments. He takes a few more steps, looks around, and sits down on the bench. She puts her purse down next to it, leans back, and inhales deeply.

At this point, the music stops (1 minute 45 seconds pass)

Albina with a slap puts her hand on her forehead, rubs her face, sits back, resting her chin on her hand, and resting her elbow on her knee.

ALBINA (thoughtfully): No, not exactly a "Yes" … but… You've got it, Albina Alexeyevna… in my old age… Well, not that in my old age, not yet forty, but somehow still not at the age that this is all happening to me now…, and the situation is not the same, oh, not the same … Ah…, you fell on my head… Pantaleika … the

Pantelei appears in the square. Albina notices him at once. Their views intersect and speak for themselves. They are happy, they are young again, they are stupid and naive again. Pantelei takes timid, playful steps towards Albina, and Albina jumps down from the bench and hides behind it.

They play catch-up, around the bench, frolicking like children. They smile and laugh. They feel good. But they don't touch each other. Their relationship is sublime, no lust or even a hint of it.

Albina runs off to the side, turns around, says goodbye to Pantelei with an apologetic look, and reluctantly leaves.

Pantelei sits down, inspired, on the bench where Albina had just been sitting.

The song ends, and the music stops.

Pantelei sits down more comfortably, rubs his knees playfully, and with a sly smile and a twinkle in his eyes continues his delicate thought.

PANTELEI (thoughtfully): Yes…, there is no other way to say it. No, Pantelei, this young lady will not leave your mind, your heart, your imagination so easily… Albina… That's life, isn't it? You live yourself a little calm, you don't touch anyone, and suddenly ON! You meet a person who…

Pantelei tries to portray something with gestures, but he is not very good at it.

PANTELEI (emotionally): That's how they do it, huh? Men? Does anyone know how they do it? After all, here you look – and the height is like everyone else's and the figure is plus or minus. Two arms, two legs, some kind of hairstyle on the head, perfume, manicure… Well, it's just like everyone else. But here they take something that is not in anyone else! And this is different… you can't explain it to yourself, but you can feel it! And so you feel that you do not know where to go.

Pantelei gets up nervously from the bench and walks around.

PANTELEI (emotionally): You start behaving like a fool, talking all sorts of nonsense. Smile like a blockhead and… Yes, you all know what to explain… Oh, women… Interesting characters.

2 THE HOUSE OF ALBINA AND THE GENES

Albina returns home. Her mood is high. A radiant smile shines on his face. She hums to herself, twirls, dances. He changes clothes, starts to do the housework, and starts cleaning. He puts the stool back in its place, checks the dust on the shelves with his finger. He notices a bunch of things on the couch. He picks up the pile, lifts it to carry it away, and suddenly hears a man's cry from under the things.

As it turns out, Stasik is sleeping on the couch under the things.

Albina drops her things back on the sofa, screams, and jumps to the side.

Stasik looks discontentedly at Albina, judging her with a look that has swum from sleep.

ALBINA (nervously, indignantly, shaking and stammering): Stasik! Scared the hell out of me.... dddddd… to the point of shaking. What the hell are you doing here?