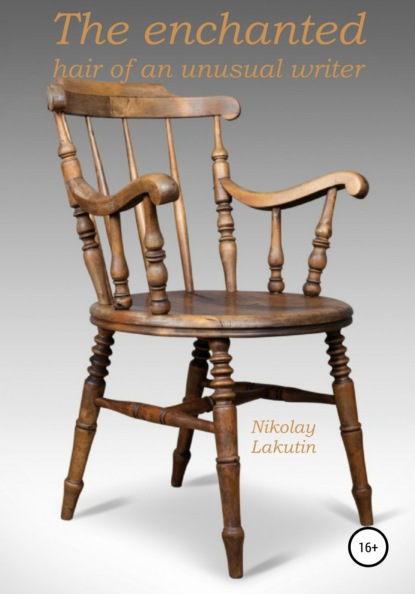 Nikolay Lakutin
The enchanted chair of an unusual writer

The enchanted chair of an unusual writer
Nikolay Lakutin

There are rumors that once upon a time there was an unusual writer. Most of his biography is shrouded in darkness, but even what is known about him is shocking. He wrote very unusual books, which attracted the attention of the public. He didn't seem to know whether he was writing truth or fiction. This writer went through a difficult path, but achieved everything he aspired to. After his death, he left his last gift to humanity – a charmed chair. It is around this chair that the passions still do not subside…

The enchanted chair of an unusual writer

Lifting another boulder, dismantling one of the littered rocks on the territory of the Crimea, a group of dubious archaeologists saw the cherished tunnel.

"Guys, we're on the right track!" The

group of exhausted men set to work with renewed vigor. When the passage was cleared, the first to step into the gorge was a graceful female foot, the owner of which was smiling contentedly with her white-toothed mouth.

– Lanterns! Bring the lanterns here, quickly! "Stop it!" she commanded.

Several workers lit up the cave with lanterns. The woman examined the space carefully.

Dozens of chests filled with gold and precious stones appeared before the eyes of the visitors. But the woman's smile was gone. In a cursing voice, she said,:

"There's no chair here. The tailor deceived us.

"Mistress, see how much good there is here?" "Is there anything else you need?" the Arab asked, wiping the sweat from his brow. We are now one of the richest people on the planet. There's enough for everyone here. We're here now…

"You can keep these trinkets," the woman interrupted the Arab's enthusiastic speech, barely able to contain her anger. – I have enough money. But they don't buy the most important things. I need this scribbler's chair. And I'll do anything to get it. No one should touch anything until special people examine the room. After that, share everything you find here, and our cooperation is over.

The woman took out a walkie-talkie, pressed a button, and said:

– Valera, give me your trackers. And until they find at least some clue – they will not leave the cave!

It was an ordinary rainy autumn day. Lyubov Nikitichna twirled her rosary beads on her fingers and looked as if out of the window. In fact, her gaze went much further. He went back to the distant memories, when as a girl she ran with her friends on an abandoned construction site. The girls loved to wander up the unfinished staircases and look down from the high, spacious floor platforms at the faint lights of the glittering city that could only be seen from here. This area was not well-run. Everyone who could-tried to leave here, the rest had to adapt. The girl Lyuba was one of those who were less lucky in life than others. She didn't dream of dolls, or ice cream, or an amusement park. All she wanted was for her father to come home from work today sober, and maybe her mother wouldn't make a scene, and then she wouldn't take it out on her only child, who practically hadn't known petting since she was a baby.

Having once again ascended to the chosen construction site, the girls suddenly stopped. Lyuba came forward and was also stunned. In front of her lay a decent-looking man, the kind that had never been brought into this area. The man was breathing calmly, his eyes were open, but the pool of blood around him indicated that he didn't have long to breathe.

The girls took a step back, but Lyuba came closer. The man turned his head slightly in her direction, then smiled and asked:

"Better than yours," the perky girl snapped without thinking.

The man grinned out loud, reached for the sole of his shoe, writhed a little, as if in pain, and took out a folded gray sheet of paper from a secret compartment in the sole of the shoe.

"Take this," he said, handing the note to the girl .

Lyuba took a few cautious steps and took the note, looking into the stranger's kind eyes. The man smiled for a few more seconds, and then suddenly his face stopped expressing emotion, he was no longer breathing.

The girls left the place with a cry and never came here again.

These memories were interrupted by a knock on the door. Lyubov Nikitichna pulled herself up slightly and asked sternly:

– This is Valera. I have something.

The woman opened the door, took the documents from the plyugavogo citizen, and, without saying a word, slammed the door right in his face.

After examining the documents brought in, Lyubov Nikitichna rubbed her wrinkled forehead, snorted something, sat down at her desk and mechanically, without looking, sketched a chair. Then she looked at what had happened, crumpled the paper nervously, and threw it into the trash..

A rolled-up piece of paper, received from a strange citizen, lay for a long time in Lyuba's nightstand in her childhood years. Her friends asked her what kind of note the stranger had given her. The whole team studied it, discussed it, and then forgot it. So, this piece of paper was waiting in the wings for almost ten years, until one day, on the eve of coming of age, the girl decided to conduct an audit in her room and clear her personal space of junk. And now, Lyuba is almost eighteen. In her hands, she holds the same piece of paper and turns the events of long-gone days in her memory.

Even if this phone number still exists, I don't think I can explain who I am or what I'm calling about to the person who answers the phone.

Lyuba folded the paper and threw it into the general pile of what had already been sorted into scrap. But she had her doubts. I remembered the stranger's eyes, his pleasant, inviting smile. This is his kind "How are you".

There was something wrong with all this. Something didn't connect. Why an unknown man on the verge of death suddenly decides to give some phone number to an incomprehensible girl. Yes, and at the same time explaining: "Take it, it'll come in handy."

Lyuba sat down on the bed and picked up the note again, unfolding it and reading it for the unknown number of times.

Chair… Yes, there was definitely a chair drawn under the phone number. The phone was almost lost, but it was still visible. Then, almost ten years ago, mobile phones were not even dreamed of. Not everyone had a home landline phone. Lyuba got her first mobile phone a year and a half ago. Dad gave it to me with a light hand, having bought it "on the cheap" from some drunkard. The phone was battered, but Lyuba loved it very much and was very happy with the gift. The SIM card of the same unknown seller remained in the phone, so Lyuba reasoned so:

"What am I risking?" In extreme cases, I will change the SIM card, especially since it should have been done a long time ago. We have to deal with this issue, after all.

Lyuba dialed the phone number indicated on the sheet, hesitated for a few seconds, and pressed the call button.

The phone was active, and there were long rings. The girl was numb with tension, listening to the speaker of the phone. And then, on the other end, a soulful male voice answered.

"Hello, Lyuba," the girl's response to the call sent shivers down her spine.

"I know you have a lot of questions, and I can answer most of them. My name is Rodion.

Lyuba dropped the call and nervously threw the phone on the bed, trying to figure out what it was just now.

Of course, she had watched movies and shows about psychics on TV, but nothing like this had ever happened in her life before. Frankly, she didn't believe in all this stuff.

Her phone rang, the number was not determined.

With a trembling hand, Lyuba picked up her cell phone, and after a little hesitation, raised it to her ear, accepting the call.