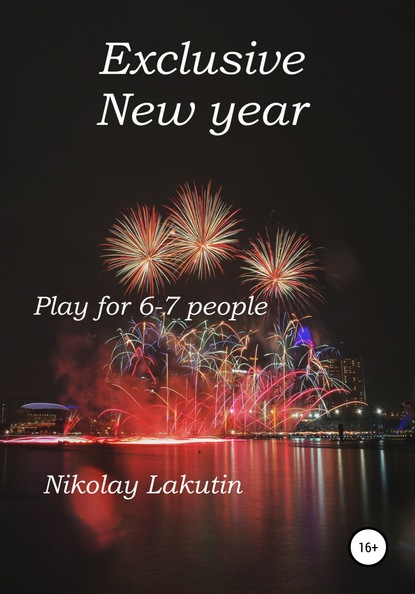 Corporate events in the organization and the cycle of incidents have a lot in common. We do not usually think through every detail and run the program of the event as a rehearsal. We are driven by improvisation on the basis of intoxicating beverages. Therefore, corporate events in Russia almost always leave a vivid indelible impression in the minds of people passing by accidentally… And the Comedy "Exclusive New year" is no exception!

ANATOLY STEPANOVICH – Director of the company;

PHOTOGRAPHER-the name is not voiced;

CHAIRMAN of the BOARD of DIRECTORS – the name is not announced.

The photos announced to the audience involve extras from the theater troupe.

The roles of the photographer and the representative of the Board of Directors are episodic and do not overlap, they can be performed by one actor.

A winter song is playing, something about snowflakes, about new Year's days.

Yana, wearing her glasses for the sake of her image, is busy with reports. Paperwork.

Petrovich fiddles with workbooks, enters something into the computer.

Irina Olegovna with a telephone receiver at her ear is negotiating with another uncooperative client.

Viktor Vasilyevich brings a cardboard box with some dishes in his hands. He is cheerful, cheerful, and enthusiastic.

VIKTOR VASILYEVICH (in high spirits, sharing his joy with the team):

Employees are distracted from their tasks and look at the visitor.

VIKTOR VASILYEVICH (in high spirits, sharing his joy with the team): our personalized mugs have Arrived! Now not aby from what we will drive tea! (Still holding the box lovingly in his hands, stroking her) With the company logo and the name of each employee… You'll see for yourself! Come get ' em!

The logistician looks for a place to put the box, the Manager cuts off his phone conversation, the others also leave their business, start to rise in their chairs to unpack the box and all that, but their actions are interrupted by the Director who entered the office.

The Director with a folder in his hand walks with a strict step, with a businesslike look. This view already makes it clear to all employees that they should not wait for good news.

The Director throws the folder on the table with force.

ANATOLY STEPANOVICH (strictly, seriously): Gentlemen! I have come to tell you the most unpleasant news!

The team is straining even more.

Petrovich falls into his chair almost senseless, banging his forehead against his Desk.

Irina Olegovna slaps her distressed face with her hand and shakes her head desperately.

Viktor Vasilyevich, in a state of shock, drops the box from his hands. It falls to the floor, and you can hear the clink of broken dishes in the box.

YANA (losing her composure, her voice shaking, losing its strength): Anatoly Stepanovich, why are you doing this to us?

The Director shrugs a little sheepishly.

YANA (very nervous, plaintively): I just put in the last missing teeth after the last corporate party! Last week, I made the last payment on the loan.

PETROVICH (nervously, irritably, rubbing his bruised forehead): And I spent two months weathering the interior of my car after those Gypsies! Never mind the car, the nervous system is still not fully restored! She won't survive another corporate event like this!

The logistician, being in a prostration, takes a few steps towards the Director, without lowering his hands, as if the box is still in his hands, does not look at his feet and walks over the box that he brought and dropped. The crunch of broken dishes is heard, but this does not awaken the dumbfounded Viktor Vasilyevich.

VIKTOR VASILYEVICH (to the Director, plaintively, holding out his hands as if in supplication): Anatoly Stepanovich, rodnenky, breadwinner, how is it? Don't kill the last of the Mohicans. After all, the number of the team has almost halved after the last celebration. There, January is a drunken month, then until February, people will rock. I won't be able to cut a new one for the transport Department until March, and I don't know who gets caught. Do you remember how much trouble this situation caused in the first quarter?

PETROVICH (indignantly, logistics): Cut – it's you, my dear, still optimistic look. It cost me a lot of effort to find new candidates. After all, our company thundered out loud! In the news summary, we are with the last corporate got, if anyone forgot!

ANATOLY STEPANOVICH (upset, sympathetic): I Remember, I remember everything, I am perfectly aware and … the

Director waves his hand away hopelessly.

ANATOLY STEPANOVICH (everyone, on your nerves): Do you think this is my initiative? I have so-and-so, seams remained on memory from last corporate party! Do you think I'm eager to repeat it?

The team takes a sympathetic breath with a certain amount of irony and restrained laughter. Petrovich manages to restrain himself less than anyone else.