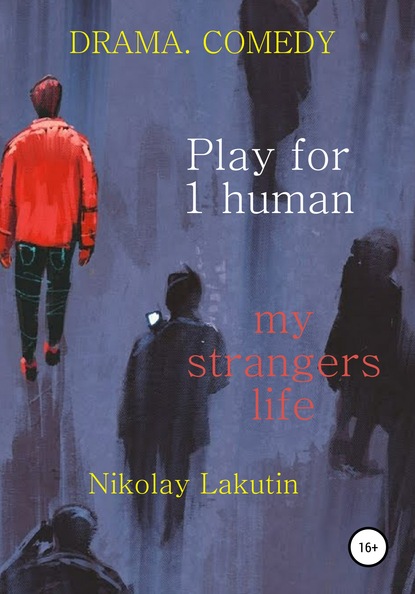 What is the life of an actor? Some of us can imagine or guess how the natives of the scene live. But the external life is very different from the internal life, and the actor, like no other, shows this polarization. Of course, the game of life is filled with certain positive components, which is not present in other professions, but it also has its own nuances. And these nuances, in a certain state of Affairs, can be very expensive for the player…

The play "MY OTHER people's LIVES»

Comedy for 1 person. One male role.

ALEXANDER is an experienced theater and film actor.

All rearrangements of the set design are performed by the assistant Director in front of the audience in a subdued light, to music, this will give you the opportunity to switch, relax, spend the past episode in your mind and prepare for a new scene. This move is also provided for cutting out time for the actor to have time to change for the next scene.

The sound of breaking glass is heard.

From the window she jumps out and falls zapoloshnye Alexander.

He is wearing a ragged shirt, one sock on his leg, and his underpants are in place, though on the left side, and slightly lowered, which the inquisitive eye of the viewer can notice.

His trousers and jumper are crumpled in his hand.

Alexander hastily leaves the territory next to the window, finds a secluded place, tries to catch his breath, and hurriedly dresses.

ALEXANDER (with shortness of breath, to the audience): What is most offensive, I haven't even done anything yet, just entered, as comrade Saakhov from the Caucasian captive would say. However, the situation here is somewhat different. I did go further than that in my intentions, but… alas, not as far as I had planned.

He finishes putting on his trousers and jumper and realizes that one sock and one Shoe are missing.

He nods his head sadly, glancing toward the window.

He puts his hands in his trousers.

ALEXANDER (to the audience, reproachfully): Yes, gentlemen! It also happens that the docking has not yet taken place, and you are already defeated! Well, at least convicted and almost punished!

What exactly did I do? Well, I met a lady. We are no longer youngsters, it is clear that we do not need much time for talking and rocking. Still, everyone understands what's what!

In theory, I might not have known she was married at all! Theoretically. Why jump on me right away with a tire iron? This, after all, is not pedagogical, ethical, or hygienic! Why the hell do people keep a tire iron in their apartments anyway? Know, I'm not the first…

ALEXANDER (to the audience, with condemnation): And yet. Here's the situation. You are a happy, or not very happy, but almost certainly a Horny husband. Come home and find your wife with some guy. Well, let's say in bed, even though we didn't have time to get to it. (He thinks sympathetically, pauses for a moment.) How should an educated person behave in this case? We must assume that from childhood we are not just taught to say Hello to strangers, if we intend to enter into a dialogue with them. So why do people always forget about this elementary rule? Not once in my practice of such excesses, not a single husband greeted me! And what do we want from this society? What peaks of self-realization and development of the level of consciousness can we talk about in this state of Affairs?

He shakes his head disapprovingly and passes, snorting indignantly across the stage.

ALEXANDER (to the audience, looking for sympathy): Well, you saw your wife with someone. So you figure it out first! If you don't say Hello, you ignoramus, then at least ask what's what! And he… Don't ask how it will give (swings his fist, indicating the continuation of the remark with a gesture) In General, everything happened. Do you know how much it costs to insert your teeth now? All frustration, all waste with these rude, ignorant, uneducated narrow-minded people.

Changes the sock from one foot to the other. The other leg is exposed accordingly.

ALEXANDER (to the audience, explaining): My leg is frozen. That one was still more or less warm, but this one was frozen. It'll warm up, then I'll change it back. That's how we live!

ALEXANDER (to the audience, looking for sympathy): Sometimes, you know… You will come to the young lady in a fit of continuation of a beautiful evening. And you don't really want to. So somehow everything worked out, it turned out. What should I do? If you refuse, you will offend the lady. You'll leave her traumatized for life. So you have to pore over the mortal body. And you probably think that men are such dogs that they are always ready to climb under every skirt everywhere? Not at all. We like the attendants of the forest. We are happy for the common great cause. Exclusively care and attention to the fair sex, but the rest is already… Production costs, so to speak. And I must Tell you that it is very insulting when you are such a caring, sensitive, responsible, noble and sympathetic person is put out of the door (shouts in the direction of the window from which he fell) or out of the window! That is even worse!

Makes a lyrical digression on the face.

ALEXANDER (to the audience, in the pose of an ancient Herald):

I'm all flabby, cold, and exhausted,

Doubt is gnawing, was it worth it to be born into the world?

It comes out of the image of ancient characters.

ALEXANDER (to the audience, looking for sympathy):

Here brought. He spoke in verse.

These women are capable of anything.

After all, he was not diligent, he was fooling his brains,

Alexander covers his mouth with his hand in amazement, not expecting what he is saying.

ALEXANDER (to the audience, excitedly):

I'll get out of here quickly,

I haven't had any such ideas yet…