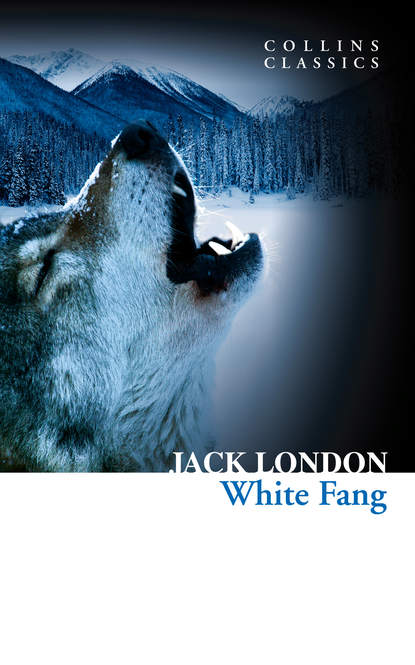 HarperCollins is proud to present its new range of best-loved, essential classics.‘Fear urged him to go back, but growth drove him on…‘Set in the frozen forests of the Yukon Territory, Canada, during the Klondike Gold Rush of the 1890s, ‘White Fang’ tells the story of a young wolf-dog’s journey from the wild into human territory. As White Fang learns that civilisation is every bit as vicious and violent as nature – and that survival is only awarded to the fittest – we too see how instinct, sensation and emotion drive every one of us.Published in 1906 to wide and instant acclaim, this is a remarkable and moving look at the timeless relationship between man and dog.

This eBook edition published by William Collins in 2014

In 1819, millworker William Collins from Glasgow, Scotland, set up a company for printing and publishing pamphlets, sermons, hymn books, and prayer books. That company was Collins and was to mark the birth of HarperCollins Publishers as we know it today. The long tradition of Collins dictionary publishing can be traced back to the ﬁrst dictionary William published in 1824, Greek and English Lexicon. Indeed, from 1840 onwards, he began to produce illustrated dictionaries and even obtained a licence to print and publish the Bible.

Soon after, William published the ﬁrst Collins novel, Ready Reckoner; however, it was the time of the Long Depression, where harvests were poor, prices were high, potato crops had failed, and violence was erupting in Europe. As a result, many factories across the country were forced to close down and William chose to retire in 1846, partly due to the hardships he was facing.

Aged 30, William’s son, William II, took over the business. A keen humanitarian with a warm heart and a generous spirit, William II was truly “Victorian” in his outlook. He introduced new, up-to-date steam presses and published affordable editions of Shakespeare’s works and ThePilgrim’s Progress, making them available to the masses for the ﬁrst time. A new demand for educational books meant that success came with the publication of travel books, scientiﬁc books, encyclopedias, and dictionaries. This demand to be educated led to the later publication of atlases, and Collins also held the monopoly on scripture writing at the time.

In the 1860s Collins began to expand and diversify and the idea of “books for the millions” was developed. Affordable editions of classical literature were published, and in 1903 Collins introduced 10 titles in their Collins Handy Illustrated Pocket Novels. These proved so popular that a few years later this had increased to an output of 50 volumes, selling nearly half a million in their year of publication. In the same year, The Everyman’s Library was also instituted, with the idea of publishing an affordable library of the most important classical works, biographies, religious and philosophical treatments, plays, poems, travel, and adventure. This series eclipsed all competition at the time, and the introduction of paperback books in the 1950s helped to open that market and marked a high point in the industry.

HarperCollins is and has always been a champion of the classics, and the current Collins Classics series follows in this tradition – publishing classical literature that is affordable and available to all. Beautifully packaged, highly collectible, and intended to be reread and enjoyed at every opportunity.

The literary establishment has always tended to consign novels about animals to children’s fiction, mainly because of the more imaginative and open nature of a young audience. The appeal of the animal kingdom and the anthropomorphism of creatures has always been something that delights children and is perhaps less likely to excite an adult reader.

The anthropomorphism of animals has a long tradition in literature, and can be dated back to Aesop, a Greek storyteller from the 6th century BC. The many fables attributed to Aesop are moralistic stories that often feature animals as their protagonists, such as the well-known tale of The Tortoise and the Hare. It is almost certainly easier for children to access these stories because of the imaginative use of animals, but it is also a useful device for adults because it pares down or simplifies any characterization, and therefore the characters lose the complexity of human personality. This enables the storyteller, or novelist, to focus on the issue at hand, rather than becoming bogged down by intricate character analyses.

There have been numerous popular novels that feature an animal as the central character. Perhaps the best known example is Anna Sewell’s Black Beauty (1877), which tells the story of a horse from a quasi-equine point of view and drew attention to the notion of animal mistreatment in the Victorian age. In 1893 came a similar book titled Beautiful Joe, by Margaret Marshall Saunders, this time from a quasi-canine perspective. Saunders’ writing was heavily influenced by Sewell’s Black Beauty. Jack London’s The Call of the Wild (1903) also tells the story of a dog, although it is written in the third person, rather than the first.

The Call of the Wild is about a German Shepherd named Buck who finds himself being taken from his wealthy original owners to join a sled team in Yukon, Canada, during the Klondike gold rush of 1897–8. Buck is maltreated by his inexperienced new owners, only to be saved by John Thornton, an outdoors man who duly nurses the dog back to health. Thornton is then killed in a raid by Native Americans leaving Buck alone to fend for himself. He joins a wolf pack, eventually giving in to his wild and primitive instincts and becoming pack leader, but never forgets the kindness shown to him by Thornton.

Jack London and his Work

Jack London was a proactive socialist as well as a writer. His work is allegorical in the sense that The Call of the Wild may be interpreted as a treatise on moral and ethical conduct, along with it being an exploration of love and loyalty. Perhaps unsurprisingly, he was also a dog lover. The Call of the Wild shows how dogs have evolved as pack animals, learning to bond and obey within a group. In the wild, wolves learn to curry favour within their pack in order to survive and therefore breed with the pack females, thus passing their genes on to the next generation. These inclinations are so strongly imprinted that domestic dogs express them in their behaviour towards human owners, and dog owners interpret this natural instinct as love and affection.

London was accused of plagiarism by another writer, named Egerton R. Young who had published a book titled My Dogs in the Northland in 1902. London acknowledged that he had used Young’s book as a point of reference for his research, but had not taken anything from the story. He also claimed to have written to Young by way of thanks, but Young wrote to the New York Times in 1907 stating that he had never received a letter from London. Factually, the stories are quite different from one another, even though they are both played out in the same region and involve dog sleds. One major difference is that Young’s story is told in the first person from the point of view of a human.

The Call of the Wild has been adapted into various films and television series – it is a tale that translates so well to different media because it is both straightforward and emotive. The audience can easily tell who the good people are and who London intends for us to view as bad people, and the story is imbued throughout with pathos. After experiencing genuine kindness from John Thornton and then losing him, Buck returns to the wild and London’s message seems to be that love, warmth and contentment should be appreciated as it is often short-lived. He also shows that the struggle for survival is instinctual – as the story draws to an end, Buck has recovered his ancestral, primitive behaviour and fully detached himself from the civilized world that he knew.

First serialized in an American magazine and then published in 1906, the novel White Fang focuses on the domestication of a wild beast, a plotline which reverses the theme of Jack London’s previous book, The Call of the Wild (1903). Set during the Klondike Gold Rush of the 1890s, one of the story’s strengths is the author’s ability to capture the brutal reality of survival in the wilds of the Yukon, Canada.

The eponymous main ‘character’ is part wolf, part dog, and he eventually finds himself living among humans where his lot is only marginally better than in the harsh wilderness. A sense of alienation surrounds White Fang, who is persecuted by wolves for being part dog and then by dogs for being part wolf. He becomes so toughened by the hostility of the world around him that he transforms into a vicious killer, an inevitable consequence of his instinct to survive.

Jack London anthropomorphized White Fang and the other animal characters – giving them human personality traits and voices – so that he could reflect on society and its failures without being overly moralistic, which would have been a natural consequence of using human, rather than animal, characters. Its social commentary aside, White Fang remains a well-loved tale, comprising many twists and turns, highs and lows, friends and foes.