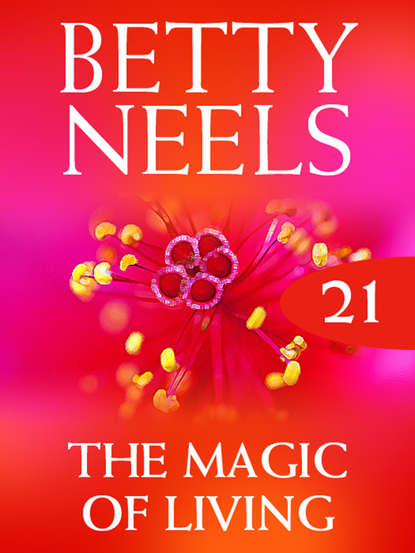 The Magic of Living
Betty Neels

Mills & Boon presents the complete Betty Neels collection. Timeless tales of heart-warming romance by one of the world’s best-loved romance authors.She stood no chance with Gideon!Arabella Birch had a less than happy introduction to Holland when she became involved in a traffic accident. It seemed destined that the first person on the scene should be Dr Gideon van der Vorst, who took charge of the situation – and Arabella –in a very commanding way.When Arabella found herself involved professionally with the imposing doctor, she began to wonder if destiny had known what it was doing. Once her glamorous cousin Hilary caught sight of Gideon, it would be no use falling in love with him.

Arabella stopped, aware that her tongue, usually so tardy with its speech, was getting ahead of her thoughts.

But to good purpose, it seemed; the ice had gone, Gideon’s blue eyes were warm again. His voice was warm, too. “I’m sorry I was angry, Arabella, I’m not anymore. But why are you so anxious to pair me off with Hilary?” She remembered what Hilary had said.

“Well, Hilary told me…that is, you mustn’t mind her going out with Mr. Andrews—she doesn’t like him very much, only she promised him and she stood him up last week. Hilary didn’t mean you to quarrel about it…perhaps you could take her out tomorrow evening instead.” He was staring at her with an expressionless face.

“Tomorrow evening I shall be back in Doesburg.” His wide mouth curled into a smile. “Will you think of me there?”

She nodded a rather wispy head. “Oh, yes, of course I will.”

Romance readers around the world were sad to note the passing of BETTY NEELS in June 2001. Her career spanned thirty years, and she continued to write into her ninetieth year. To her millions of fans, Betty epitomized the romance writer, and yet she began writing almost by accident. She had retired from nursing, but her inquiring mind still sought stimulation. Her new career was born when she heard a lady in her local library bemoaning the lack of good romance novels. Betty’s first book, Sister Peters in Amsterdam, was published in 1969, and she eventually completed 134 books. Her novels offer a reassuring warmth that was very much a part of her own personality. She was a wonderful writer, and she will be greatly missed. Her spirit and genuine talent will live on in all her stories.

The Magic of Living

THE nursery of Little Dean House was no longer used as such, but its rather shabby comfort, coupled with the knowledge that Nanny Bliss would be sitting by its cheerful little fire in the old-fashioned grate, the very epitome of security, and when necessary, sympathy, made it a retreat to which every member of the Birch family went at one time or another.

The elder daughter of the family flung open its door now; she had hunted all over the garden for Arabella without success, only to remember after ten minutes’ futile poking and peering in the rather untidy, overgrown garden which surrounded the rambling house that she had heard her cousin say that she would help the twins finish their jigsaw puzzle during the afternoon, and that, she knew from experience, would be in the old nursery.

All three of them were on the floor, she perceived, as she shut the door behind her and crossed the room to where Edmund and Erica, with Arabella between them, were sprawling on their knees. The twins were ten years old; already showing signs of the family good looks, but their cousin bore no resemblance to her relations, for she had no looks worth mentioning; indeed, beside the golden prettiness of her older cousin, her unremarkable features and pale brown hair stood no chance at all; something which didn’t bother her overmuch; she had lived with her aunt and uncle since she had been orphaned at the age of five, and over the years had become accustomed to living in Hilary’s shade. They got on tolerably well together, and if the elder girl had the lion’s share of praise for her pretty face, her undoubtedly clever mind, and her charm of manner, Arabella hadn’t minded that either; at least not much. Hilary was the daughter of the house and as such expected—and got—everything she wanted. Arabella could quite see that she could hardly expect to receive the same attention for herself and she was grateful for the rather vague affection accorded her by her aunt and uncle—after all, they had given her a pleasant home, a good education and had treated her as one of the family—well, almost, and now that she was twenty-two and a trained children’s nurse and half way through her general training, it was only natural that her aunt should consider her capable of keeping an eye on the twins when they were home from school and she was herself on holiday or days off. It sometimes meant that she was the one to stay home if an expedition which didn’t include the twins was planned, for Nanny Bliss, although barely in her sixties, was still not quite recovered from the ’flu, with all its attendant after-effects, and as Aunt Maud pointed out sensibly enough, the twins needed someone firm as well as patient; able to join in their activities and curb them in their more hair-raising adventures.

It was a pleasant autumn afternoon, and Arabella had hoped to go over to the doctor’s house for tea and a game of tennis, but her aunt’s hints at lunch had been strong enough for her to scotch this idea. She had resigned herself to entertaining the twins, who, for some reason known only to their mother, had been told to remain indoors. Arabella knelt between them now, her chin on her hands, studying the puzzle and tolerably content. She had learned years ago not to be sorry for herself and she had common sense enough to realize that not everyone could expect everything they dreamed of from life. She liked her work, she had a number of friends and a strong affection for her uncle and aunt as well as a sense of loyalty. She looked up now as her cousin came to a halt in front of her, and the better to talk, dropped to her knees too.

She said in a wheedling voice: ‘Bella, I want to talk to you.’

Arabella fitted a particularly difficult piece into the puzzle. When Hilary called her Bella it meant that she wanted her to do something for her: partner some disappointed young man to the cinema or local dance because Hilary had something better to do—lend her something, or drive her somewhere, for Hilary couldn’t drive; she hated it and declared that she had men friends enough to drive her wherever she wished to go, only just sometimes they weren’t available, and then Arabella, who despite her unpretentious appearance, drove very well indeed, would be coaxed into getting out the car and taking her cousin to wherever it was she wanted to go. It could be a nuisance, but Arabella enjoyed driving and it had never entered her head to condemn her cousin for being selfish.

It wasn’t any of these things now, though. Hilary went on: ‘Let’s go over to the window,’ and ignoring the cries of protest from the two children, strolled to the other end of the room, calling a casual ‘Hi, Nanny,’ as she went. Arabella shook herself free from her cousins and joined her, waiting quietly to hear what Hilary had to say and thinking as she waited what a very pretty girl she was and how clever too. She was one of the Ward Sisters on the private wing at the same hospital at which Arabella was doing her training, and was popular with patients and doctors alike, being showered with gifts from the former and receiving a never-ending series of invitations from the latter, and on top of that, she was very good at her job. She turned her bright blue eyes upon her cousin now.

‘Bella, remember when old Lady Marchant asked me if I’d go with that bus load of kids to that holiday camp in Holland—something to do with that society—she’s the president or secretary, I can’t remember—and I said I would, because after all, she’s frightfully influential and all that—well, Dicky White’—Dicky was one of the adoring housemen who followed her around—‘told me yesterday that the old girl had gone to Canada, so she won’t know if I go on that dreary trip or not.’

She smiled brilliantly and with great charm. ‘Go instead of me, darling—you know how good you are with brats. Besides that, Sister Brewster’s going too, and you know I simply can’t stand her—I should go mad.’

Arabella didn’t like Sister Brewster either. ‘They’re spastics,’ she reminded her cousin.

Hilary gave her a faintly impatient look. ‘Well, of course they are, ducky, that’s why you’ll be so marvellous with them—after all, you’re children’s trained.’ She nodded encouragingly, ‘You’ll be just right.’

‘It’s for two weeks,’ Arabella pointed out, and added reasonably, ‘and I don’t really want to go, Hilary, my holidays are due and I’m going to stay with Doreen Watts—you know, in Scotland.’

‘Oh, lord, Bella, you can change your holidays and go a couple of weeks later—what’s a couple of weeks?’ Hilary waved an airy hand; she had long ago mastered the art of reducing everything which didn’t directly concern herself to an unimportant level which she didn’t need to worry about.

‘Why don’t you want to go?’ asked Arabella. ‘Oh, I know about old Brewster, but what’s the real reason?’

Hilary smiled slowly. ‘It’s a secret, so don’t breathe a word. You know that new honorary? The one with the dark hair and the hornrims?’

Her cousin gave her a look of contemptuous affection. ‘Bella, you are a simpleton—a nice one, mind you—I do believe you still live in an age of orange blossom and proposals of marriage and falling in love.’

‘Well, darling, a lot of girls still do, I suppose, but one can have some fun while waiting for the orange blossom—and I’m not doing any harm. He and his wife don’t get on, and I’m only going out to dinner with him.’

‘But can’t you go out with him before you go with the children?’

Hilary frowned. ‘Look, darling, there’s a dance he’s taking me to—oh, don’t worry, it’s miles away from Wickham’s, no one will ever know, and it comes slap in the middle of this wretched trip.’ She turned her beautiful eyes upon Arabella. ‘Bella, do help me out—I can wangle it so easily, and no one will mind. There are a thousand good reasons why I can’t go at the last minute and they’ll be only too glad if I can find someone to take my place—you.’ Which was true enough.

Arabella frowned, and the stammer which only became noticeable when she was deeply moved, became apparent. ‘You s-see, Hilary, I d-don’t think you sh-should.’

Her cousin smiled beguilingly. ‘Oh, Bella darling, I tell you it’s all right. Anyway, I’ve promised to go and I can’t break a promise.’

‘B-but you m-must have kn-known that you were going with the children before you s-said you would go,’ stated Arabella baldly.

She studied her cousin’s face, reflecting that Hilary had been like a big sister to her ever since she could remember—a rather thoughtless sister sometimes, but never unkind. That she was also completely selfish was a fact which Arabella had grown up with and accepted cheerfully; if she herself had been the pretty, pampered daughter of a well-to-do man she would undoubtedly have been selfish too. She watched a dimple appear in Hilary’s cheek.