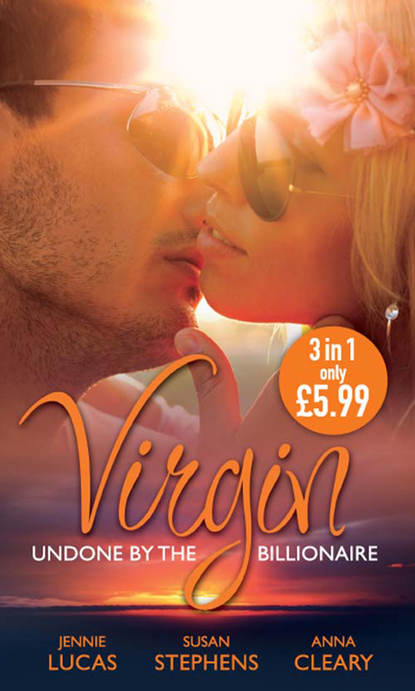 Her innocence is his prize Taken by the tycoon Devilishly sexy Roark is enchanted by Lia, New York’s most beautiful widow, and determined to atone for his role in her contract marriage. Discovering Lia’s still a virgin, he’s intent on remedying her purity with passion!Seduced by the royalTara makes Count Lucien Maxime’s blood run hot, but past experience has convinced him she must be a gold-digger. Until tragedy brings them together and he learns she’s innocent in every way…Surrendering to the playboyIntense, brooding and distant, Connor’s everything Sophy shouldn’t desire, yet he’ll show her the most exquisite pleasure! And once he’s undressed her, the billionaire isn’t sure he can walk away.

Undone by the Billionaire

JENNIE LUCAS grew up dreaming about faraway lands. At fifteen, hungry for experience beyond the borders of her small Idaho city, she went to a Connecticut boarding school on scholarship. She took her first solo trip to Europe at sixteen, then put off college and travelled around the US, supporting herself with jobs as diverse as gas station cashier and newspaper advertising assistant.

At twenty-two she met the man who would be her husband. After their marriage, she graduated from Kent State with a degree in English. Seven years after she started writing, she got the magical call from London that turned her into a published author.

Since then life has been hectic, with a new writing career and a sexy husband and two babies under two, but she’s having a wonderful (albeit sleepless) time. She loves immersing herself in dramatic, glamorous, passionate stories. Maybe she can’t physically travel to Morocco or Spain right now, but for a few hours a day, while her children are sleeping, she can be there in her books.

Jennie loves to hear from her readers. You can visit her website at www.jennielucas.com, or drop her a note at [email protected]

To the Watermill girls—Rachael, Carol, Becks, Susan, Francesca, Rachel, Kerstin and, most of all, Sharon Kendrick—in memory of that fabulous week we hatched story plots, drank wine and ate chocolate during the creative writing workshop in Posara, Italy. You guys rock.

SPARKLING white lights twinkled beneath the soaring, frescoed ceilings of the grand ballroom of the Cavanaugh Hotel. All the glitterati of New York were sipping champagne, gorgeous in tuxedos and elaborate gowns for the Black and White Ball, hosted by the illustrious—and mysterious—Countess Lia Villani.

“This isn’t going to be as easy as you think,” Roark’s old friend whispered as they moved through the crowd. “You don’t know what she’s like. She’s beautiful. Willful.”

“Beautiful or willful, she’s just a woman,” Roark Navarre replied, raking back his black hair with a jet-lagged yawn. “She’ll give me what I want.”

Casually Roark straightened the platinum cuff links of his tuxedo as he looked around the packed ballroom. His own grandfather had once tried to force him to live in this wealthy, stuffy, gold-plated cage. He still couldn’t believe he was back in the city. Roark had spent the past fifteen years building massive land projects overseas, most recently in Asia, and he’d never thought he would come back.

But this was the largest piece of land in Manhattan to come on the market in a generation. The five skyscrapers Roark planned to build would be his legacy.

So he’d been furious when he heard Count Villani had beaten him to it. Fortunate for Roark the canny Italian aristocrat had died two weeks ago. He allowed himself a grim smile. It was lucky indeed that Roark was now dealing with the count’s young widow instead. Though she still seemed determined to follow her husband’s last wishes and spend most of his enormous fortune to create a public park in New York, the young gold digger would soon change her mind.

She would succumb to Roark’s desires. Just like every woman.

“She’s probably not even here,” Nathan tried again. “Since the count died …”

“Of course she’s here,” Roark said. “She wouldn’t miss her own charity ball.”

But hearing the awed whispers of the countess’s name around them, Roark wondered for the first time if she might be some small challenge. If he might actually have to make an effort to get her to accede to his demands.

“There are rumors,” Nathan whispered as he followed Roark through the crowds, “that the old count died in her bed of too much pleasure. His heart couldn’t take it.”

Roark gave a derisive laugh. “Pleasure has nothing to do with it. The man was sick for months. My heart will be fine. Believe me.”

“You haven’t met her. You don’t know. Christ.” Nathan Carter wiped his forehead. His old friend from Alaska was vice president in charge of Navarre Ltd.’s North American holdings. He was normally cool and confident. It shocked Roark to see him look so nervous now. “She’s hosting this benefit to raise money for the park. Why do you think she’ll sell the land to you?”

“Because I know her type,” Roark ground out. “She sold her body to marry the count, didn’t she? He might have wanted to leave the world with one magnificent charitable act to make up for years of ruthless business deals, but now he’s dead she’ll want to cash in. She might appear like some kind of do-gooder, but I know a gold digger when I see …”

His voice trailed off as he focused on a woman entering the ballroom. He sucked in his breath as he watched her descend the sweeping stairs.

Lustrous black hair curled over pale, bare shoulders. Her eyes were hazel green, the color of a shaded forest, fringed with black lashes. She wore a white gown that displayed the hourglass shape of her curvaceous body to perfection, sleeveless and tight over her breasts, the skirts widening out into a mermaid shape below her knees. She had the face of an angel, but with a bite: blood-red lips stood out starkly, rich and full and delectable, luring a man’s kiss.

Strangely shaken, Roark breathed, “Who is that?”

Nathan glanced behind him and gave a sardonic smile. “That, my friend, is the merry widow.”

“The widow …” Roark looked back at her. The woman was the most beautiful he’d ever seen. Curvy, saintly, wicked. She was a cross between Rita Hayworth and Angelina Jolie. For the first time in Roark’s life, he fully understood the ramifications of the word bombshell.

Maybe there was something to the rumors that the old count died in her bed of too much pleasure.

Roark stared at her, stunned. He’d had many women in his life. He’d seduced them easily across every continent. But at this moment it was as if he’d never seen a woman before.

He swallowed. Countess Lia Villani was a goddess.

It had been too long since he’d felt like this. Too long since he’d been so intrigued—or aroused. He’d crashed the countess’s party to convince her to sell him the land. The sudden thought came to him: if she was receptive to his proposal to sell him the land for a huge amount of money, perhaps she would be equally receptive to the suggestion that she share his bed to seal the bargain?

But he wasn’t the only man who wanted her. Not by a long shot.

Roark watched as a white-haired man in a sleek tuxedo hurried up the sweeping steps to her side. Others, not quite so bold, stood watching her from a distance. Already the wolves were circling.

And it wasn’t just her beauty that drew every eye in the room, the longing, wistful gazes of every man, the envy of every woman’s annoyed glare. She had power in the dignity of her bearing, in the cool glance she gave her new suitor. In the teeth she flashed in a smile that didn’t meet her eyes.