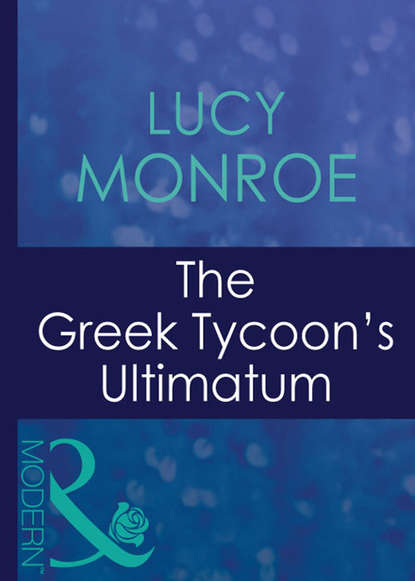 Savannah has returned to Greece with the intention of making her peace with the Kiriakis family. But Leiandros Kiriakis still believes the lies about Savannah and is set on making her pay for the past.Savannah is reluctant when Leiandros demands that she share his home. As for Leiandros, now he has Savannah right where he wants her. And in a short time he'll be giving her an ultimatum: if she doesn't want to lose everything she holds most dear, she'll agree to be his wife!

“You are due to receive your monthly allowance tomorrow.”

Although he had not bothered to identify himself, there was no mistakng the deep, commanding tones of Leiandros’s voice.

“I won’t be sanctioning that deposit, or any other, until you come to Greece.” No explanation, just an ultimatum.

is a compelling, sensual story.

A romance you won’t forget.”

They’re the men who have everything—except a bride…

what else could a handsome tycoon need? In THE GREEK TYCOONS miniseries you have already met some gorgeous Greek multimillionaires who are in need of wives.

author Lucy Monroe, with her sensual and compelling romance The Greek Tycoon’s Ultimatum

This tycoon has met his match, and he’s decided he has to have her…whatever that takes!

To my mother, Shirley Ann… The beauty of your character and strength of your spirit in the face of adversity is a constant source of inspiration for me.

Thank you for believing in my dream.

Flinching as the words flew venomously from her sister-in-law’s lips, Savannah Marie Kiriakis forced her gaze to remain fixed on the emerald-green grass in front of her.

The traditional Greek Orthodox graveside service was over and everyone had paid their final respects, everyone but her. Poised on the edge of the grave, a single white rose in her hand, she tried coming to terms with this—the final end to her marriage.

Relief warred with guilt inside her, forcing out the pain of Iona’s verbal attack.

Relief that her own torment was over. No one would ever again threaten to take her children. And guilt that this should be her reaction to the death of another human being, particularly Dion—a man she had married in good faith and youthful stupidity six years ago.

“What right has she to be here?” Iona continued when her first insult was not only ignored by Savannah, but also by the other mourners.

Dion’s younger sister had a flair for the dramatic.

Unbidden, Savannah’s gaze sought the reaction of Leiandros Kiriakis to his cousin’s outburst. His dark eyes were not set on Iona, but focused on Savannah with a look of such contempt if she’d been a weaker person, she would have been tempted to jump into the grave with her dead husband.

She could not turn away, though her heart and emotions were screaming inside for her to do just that. Leiandros’s contempt might be justified, but it hurt in a way that Dion’s frequent infidelities and bouts of violent temper had not.

The smell of fresh earth mixed with the floral offerings covering the now closed casket assailed her nostrils and she managed to shift her gaze to her husband’s grave.

“I’m sorry,” she whispered soundlessly before dropping the rose she carried onto the casket and stepping back.