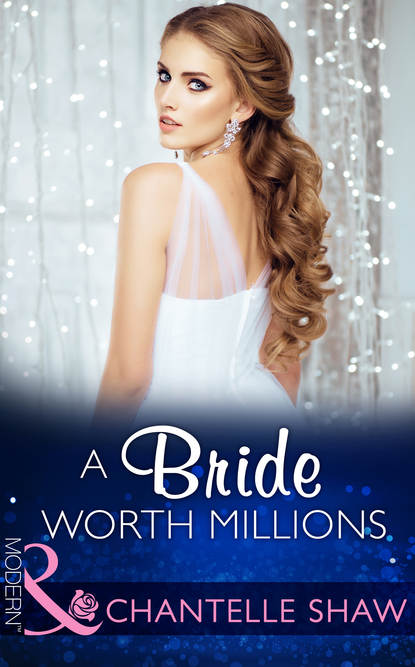 Шантель Шоу
A Bride Worth Millions

A Bride Worth Millions
Chantelle Shaw

A million reasons to say "I do"Athena Howard can't believe she did it. In an outrageously large wedding dress, she climbed out the window and escaped The Wedding of the Year and the fiancé who lied to her. And she fell……straight into Luca De Rossi's arms! It must be fate. Luca has just two weeks to marry and meet the terms of his grandmother's will. The cutthroat businessman offers Athena one million pounds to become Mrs. De Rossi in name only, unless the allure of his new wife's purity proves too much for this cynical playboy to resist claiming their wedding night…

‘In a moment we will leave the chapel,’ Luca told her. He hesitated. ‘When we step outside it will be necessary for me to kiss you.’

She blinked at him. ‘Necessary for you to…? Why?’

Athena had the most incredible eyes. The thought came unbidden into Luca’s mind. ‘There’s no time to explain now. The press are outside, and it’s vital that we make them believe our marriage is real.’

‘Real?’ She knew she probably sounded witless, but she couldn’t take in what he had said about needing to kiss her.

‘All you have to do is kiss me back,’ Luca said impatiently, when she stared at him as if he had grown a second head. ‘It shouldn’t be too much of an ordeal. You seemed to enjoy it when I kissed you in Zenhab.’

So he hadn’t forgotten that kiss. Her mind flew to the palace gardens and she remembered vividly the whisper of the fountains and the silver gleam of the moon, the scent of orange blossom and the gossamer-soft brush of Luca’s lips on hers.

He opened the chapel door and Athena’s thoughts scattered as she was blinded by an explosion of flashbulbs. Luca slid his arm around her waist and drew her close to his body—so close that she could feel his powerful thigh muscles through her dress; his hard, masculine frame was a stark contrast to her softness.

‘Remember, this has to look convincing,’ he murmured as he lowered his face towards hers.

I am intrigued about the way sisters can share a close relationship and yet so often have very different characteristics. This is certainly true of Athena Howard, whose story is told in A Bride Worth Millions, and her older sister Lexi, who features in Sheikh’sForbidden Conquest.

Awkward Athena wishes she was more like daring helicopter pilot Lexi, who met her match when she fell in love with Sultan Kadir Al Sulaimar. Athena is not the academic daughter her parents had hoped for, but at least they approve of her engagement to English aristocrat Charles Fairfax. It’s set to be the society wedding of the year—but hours before the ceremony Athena discovers that Charles only wants her to be his convenient wife to hide a shocking secret!

Desperate to escape from her wedding, Athena falls—literally—into the arms of Luca De Rossi, whom she met previously at Lexi’s wedding to Kadir. Athena is attracted to Luca, but a traumatic event when she was a teenager has resulted in her being wary of men.

Luca must marry before his thirty-fifth birthday, so he offers Athena a marriage deal: he will pay her one million pounds to be his temporary bride. Athena has secret plans for how to spend the money—and Luca has a devastating secret of his own!

I enjoyed writing about these two sisters—and the gorgeous men who claimed their hearts!

CHANTELLE SHAW lives on the Kent coast, and thinks up her stories while walking on the beach. She has been married for over thirty years and has six children. Her love affair with reading and writing Harlequin Mills & Boon

began as a teenager, and her first book was published in 2006. She likes strong-willed, slightly unusual characters. Chantelle also loves gardening, walking and wine!

For Rosie and Lucy, best sisters and best friends!

‘Really?’ Luca De Rossi could not disguise the scepticism in his voice as he glanced at the blonde in bed beside him. Giselle Mercier was exquisite, and she was an inventive lover, but Luca doubted that the French model with baby-blue eyes and a penchant for expensive jewellery was about to announce that she had discovered a solution for world peace, or a cure for cancer.

His suspicions were confirmed when she held up her left hand so that the enormous diamond on her third finger was set ablaze by the early-morning sunbeams streaming into the penthouse.