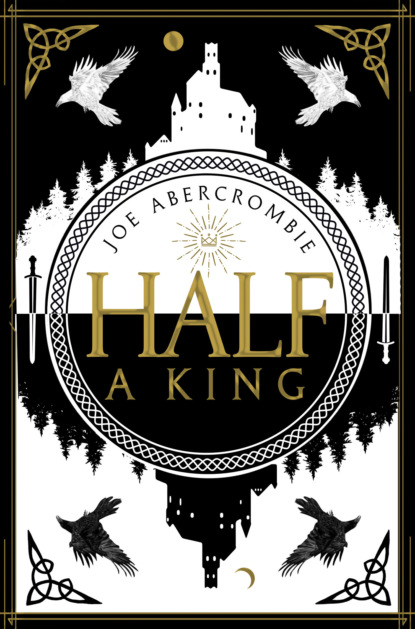 Half a King
Joe Abercrombie

A classic coming-of-age tale set in a vivid and richly-imagined world from Sunday Times bestselling author Joe Abercrombie.‘A fast-paced tale of betrayal and revenge that grabbed me from page one and refused to let go’ GEORGE R.R. MARTINPrince Yarvi has vowed to regain a throne he never wanted. But first he must survive cruelty, chains and the bitter waters of the Shattered Sea itself. And he must do it all with only one good hand.Born a weakling in the eyes of his father, Yarvi is alone in a world where a strong arm and a cold heart rule. He cannot grip a shield or swing an axe, so he must sharpen his mind to a deadly edge.Gathering a strange fellowship of the outcast and the lost, he finds they can do more to help him become the man he needs to be than any court of nobles could.But even with loyal friends at his side, Yarvi’s path may end as it began – in twists, and traps and tragedy…

An imprint of HarperCollinsPublishers Ltd

Joe Abercrombie asserts the moral right to be identified as the author of this work.

‘Joe Abercrombie does it again. Half a King is another page-turner from Britain’s hottest young fantasist, a fast-paced tale of betrayal and revenge that grabbed me from page one and refused to let go’

GEORGE R.R. MARTIN, author of A Game of Thrones

‘Fast-moving, gritty and violent, Half a King will not disappoint Abercrombie’s legion of followers’

‘Another great tale from a master. His medieval, post-apocalyptic land is full of such brilliant banter it would find a laugh at a funeral. It is macabre, menacing and Machiavelli himself would have enjoyed the way half-handed “hero” Yarvi triumphs’

ROBIN HOBB, author of Fool’s Assassin and the Realm of the Elderlings novels

‘Joe Abercrombie is fast becoming my favourite writer. The action is frenetic, the characters are as sharp as the blades they wield, and the humour is biting’

‘As Jarvi gets to know his motley band of renegades, you feel you are meeting real characters underneath the stubble and the grime. It’s this quality that both grounds the fantasy and lifts the book onto another level, so while it grips like a bear hug, it warms like a bear skin’

‘Half a King is woven with a narrative of delightful cunning as we have come to expect from Joe Abercrombie. This is a “to read in a day” kind of book’

‘Classic Abercrombie, and yet also something unexpected – grimdark fantasy for people who aren’t necessarily very young’

‘I’ve been a fan of Abercrombie’s stuff for years. His world–building is great, his characterization is marvellous, he writes an amazing action scene. I think this is my favourite Abercrombie book yet. And that’s really saying something’

PATRICK ROTHFUSS, author of The Name of the Wind

‘One of the most gripping books I’ve read for a long time. Once this plot has its teeth in you, it will not let you go’

‘Half a King isn’t merely equal to Abercrombie’s previous work; it is his finest novel to date and the one that may one day make him a household name’

‘It’s lightning fast and filled with a wonderful collection of rogues, villains and two-faced bastards’

‘Half a King can be summed up in a single word: Masterpiece … It’s a coming of age story. It’s a Viking saga. It’s a revenge tale and family drama and the return of the prodigal son. But most of all, it’s this: a short time alongside people as weak and blundering as we are, and in the midst of it all, as heroic. What a wonderful book’