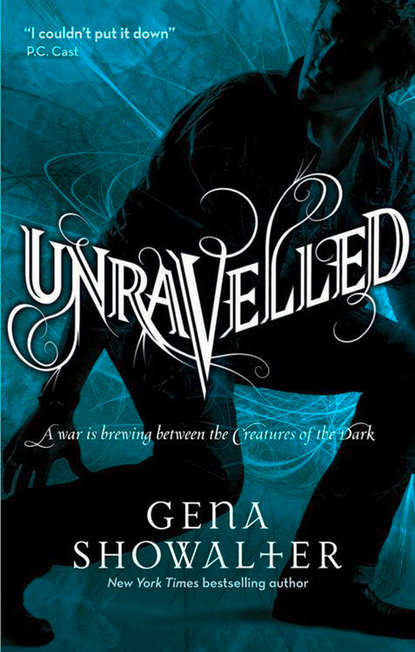 Since coming to Crossroads, Oklahoma, former outcast Aden Stone has been living the good life. Never mind that one of his best friends is a werewolf, his girlfriend is a vampire princess who hungers for his blood, and he's supposed to be crowned Vampire King—while still a human! Well, kind of.With four—oops, three now—human souls living inside his head, Aden has always been "different" himself. These souls can time-travel, raise the dead, possess another's mind and, his least favorite these days, tell the future.The forecast for Aden? A knife through the heart. Because a war is brewing between the creatures of the dark, and Aden is somehow at the center of it all. But he isn't about to lie down and accept his destiny without a fight.Not when his new friends have his back, not when Victoria has risked her own future to be with him, and not when he has a reason to live for the first time in his life. . . .

GENA SHOWALTER is a New York Times and USA TODAY bestselling author whose teen novels have been featured on MTV and in Seventeen magazine and have been praised as “unputdownable.” Growing up, she always had her nose buried in a book. When it came time to buckle down and get a job, she knew writing was it for her. Gena lives in Oklahoma with her family and three slobbery English bulldogs. Become her friend on MySpace, or a fan on Facebook and visit her at GenaShowalter.com/young-adult.

ADEN STONE THRASHED ON his bed, his sheets falling to the floor. Too hot. Sweat poured from him, causing his boxers, the only thing he wore, to stick to his thighs. Too much. His mind…oh, his poor, ravaged mind. So many flickering images tangled with consuming darkness, horrid chaos and brutal pain.

Couldn’t take…much more… He was human, yet scorching vampire blood now flowed through his veins. Powerful vampire blood that allowed him to see the world through the eyes of its donor, if only for a little while. That wouldn’t have been so terrible—he’d experienced it before—except he had ingested blood from two different sources the night before. Accidentally, of course, but that didn’t matter to his scrambled brain.

One source—his girlfriend, the Princess Victoria. The other, Dmitri, her dead fiancé. Or betrothed. Whatever.

Now their blood fought a vicious tug-of-war for his attention. A toxic back-and-forth. No big deal, right?

Over the years, he’d fought zombies, time-traveled and talked to ghosts; he should be able to laugh about a little ADD. Wrong! He felt as if he’d drunk a bottle of acid with a chaser of broken glass. One burned him while the other sliced him to pieces.

And now he was—

He winced. She’d whispered, yeah, but, too loud. His ears were as sensitive as the rest of him.

Somehow, he found the strength to push through the pain and center his gaze. Big mistake. Too bright. The heavy gloom of Dmitri’s surroundings had given way to the sparkling colors of Victoria’s. Aden peered through her eyes now, unable to even blink on his own.

“You were the strongest man ever to live,” she continued in a solemn tone, and Aden felt as if he were the one speaking, his throat rubbed raw. “How could you have been defeated so quickly?” How could I not have known what was happening? she thought.

She, her bodyguard, Riley, and their friend Mary Ann had driven Aden home last night. Victoria had wanted to stay with him, but he’d sent her away. He hadn’t known how he would react to the two different types of blood inside him, and she’d needed to be with her people in their time of mourning. For a while, he’d tried to sleep, tossing and turning, his body recovering from the beat down it had given—and received. Then, about an hour ago, the tug-of-war had begun. Thank God Victoria had beat feet. What a freaking nightmare it would have been to see himself through her eyes, in his current pathetic condition, and know what she was thinking.

When Victoria thought of him, he wanted her stuck on the word invincible. Barring that, he’d make do with hot. Anything else, no thanks. Because he thought she was perfect, in every way.

Perfect and sweet and beautiful. And his. Her image filled his mind. She had long, dark hair that tumbled down her pale shoulders, blue eyes that glittered like crystals and lips that were cherry red. Kissable. Lickable.

He’d met her only a few weeks ago, though he felt as if he’d known her forever. Which, in a warped kind of way, he had. Well, at least for the last six months, thanks to a heads-up from one of the souls living in his head. Yeah, as if vampires and telepathic blood weren’t enough of an oddity, Aden shared his head with three other human souls. More than that, each soul possessed a supernatural ability.

Julian could raise the dead.

Caleb could possess other bodies.

And Elijah could predict the future.

Through Elijah, Aden had known he would encounter

Victoria before she’d ever arrived in Crossroads, Oklahoma. A place he’d once considered hell on earth, but now considered The Awesome, even though it was a total breeding ground for so-called mythical creatures. Witches, goblins, fairies—all enemies to Victoria—and of course, vampires. Oh, and werewolves, the vampire protectors.

And, okay. That was a lot of freaking creatures. But if one myth had been true, it kinda made sense that all myths would be.

“What am I going to do with—” Victoria began again, drawing his attention to the present.

He really wanted to hear her complete that sentence. Before she could utter another word, however, his focus switched. Again. Darkness suddenly enveloped him, consuming him, chasing away his connection to Victoria. Aden’s thrashing on his bed renewed, pain exploding through him just before he linked with the other vampire. Dmitri. Dead Dmitri.

Aden wanted to open his eyes, to see something, anything, but his lids were seemingly glued together. Through panting breaths, he smelled dirt and…smoke? Yes. Smoke. Thick and cloying, itching his throat. He coughed, and coughed, or was Dmitri coughing? Was Dmitri still alive? Or was the body only reacting because Aden’s thoughts sparked through their shared mind?

He tried to move Dmitri’s lips, to force words to emerge, to gain someone’s attention, but his lungs seized, rejecting the ashy air, and suddenly he couldn’t breathe at all.

“Burn him,” someone said coolly. “Let’s make sure the traitor stays dead.”

“My pleasure,” another replied, a gleeful edge to the tone.

In the darkness, Aden couldn’t see the speakers. Didn’t know if they were human or vampire. Didn’t know where he was or—the first man’s words finally sank in, consuming his thoughts. Burn…him…

No. No, no, no. Not while Aden was here. What if he felt every lick of flame?

No! he tried to scream. Again, no sound emerged.

Dmitri’s body was lifted. Aden felt as if he were suspended from a wire, head flopping back, limbs forgotten. Nearby, he heard the crackle of those dreaded flames. Heat wafted to him, swirling around him, enveloping him.

No! He tried to thrash, to fight, but the body remained motionless. No!

A moment later, contact. And oh, yes. He felt it. The first streams of fire flicked against his feet before catching…spreading. Agony. Agony unlike anything he’d ever known. Skin, melting. Muscles and bones, liquefying. Blood, disintegrating. Oh, God.

Pinpricks of light winked through the darkness, bloomed and locked together, until he was once again seeing the world through Victoria’s eyes. Yet another switch. Thank God. He was panting, so drenched with sweat he was practically swimming, but despite the change, residual pain—far greater than the acid still swishing through his veins—slithered from his feet to his brain, and he wanted to shout.

He was—shaking, he realized. No, Victoria was shaking.

A soft, warm hand pressed against his—her—shoulder. She looked up, vision blurry from her tears. Moonlight glowed in the sky, he saw, and stars twinkled. A few night birds even flew overhead, calling to each other in…fear? Probably. They had to sense the danger below them.

Victoria lowered her gaze, and Aden studied the vampires surrounding her. Each was tall, pale, striking. Alive. Most were not the monsters storybooks painted them to be. They were simply detached, humans a food source they couldn’t afford to care about.

Vampires lived for centuries, after all, while humans withered and died. Exactly as Aden was soon to die.

Elijah had already predicted his death. The prediction sucked, yeah, but it was the method that sucked more: a sharp knife through his very necessary heart.

He’d always prayed the method would miraculously change. Until now. A knife through the heart beat burning to death inside a body that didn’t belong to him any day of the week. And when the hell was he going to catch a break, huh? No torture, no fighting creatures, no waiting around for the end, just flunking tests and kissing his girlfriend.