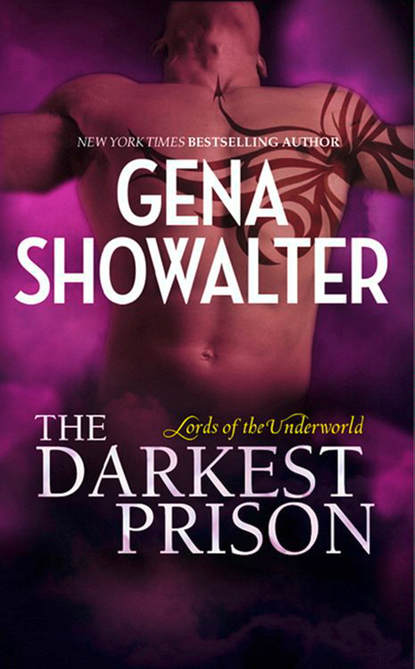 Passion and danger collide in this brand-new, eBook exclusive Lords of the Underworld adventure!Once, Atlas, the Titan god of Strength, was the Greek goddess Nike's slave. Now, he is her master. And soon these sworn enemies destined to destroy one another will be forced to risk everything for a chance at love. . ."One of the premier authors of paranormal romance. " - New York Times bestselling author Kresley Cole

The Lords of the Underworld

Passion and danger collide in this brand-new, eBook exclusive Lords of the Underworld adventure!

Once, Atlas, the Titan god of Strength, was the Greek

goddess Nike’s slave. Now, he is her master. And soon

these sworn enemies destined to destroy one another

will be forced to risk everything for a chance at love …

“One of the premier authors of paranormal romance.”

Reyes, once an immortal warrior for the gods, now possessed by the demon of Pain and living in Budapest, entered his bedroom. He was drenched in sweat and panting from the force of his workout. Because he could not experience pleasure without physical suffering, the burn in his muscles had excited him.

As always, his gaze sought out his woman and he palmed the blade they preferred to use during their loveplay. She was sitting at the edge of their big bed, lovely features drawn tight as she studied the canvas in front of her. A canvas she’d propped on an easel and lowered so that she had a direct view. Blond hair fell to her shoulders in wild disarray, as if she’d tangled her fingers through the thick mass multiple times, and she was chewing on her bottom lip. Sex could wait. She was troubled, and he would be unable to think of anything else until he’d solved this dilemma for her. So he sheathed the blade. “Something wrong, angel?”

Her eyes lifted and landed on him, worry in their emerald depths. She offered him a small smile. “I’m not sure.”

“Well, why don’t I help you figure it out?” Anything that bothered her, he would dispatch. No hesitation. For her happiness, he would do anything, kill anyone.

“Shall I shower before I join you?”

Darling woman. But he didn’t like the thought of dirtying her pretty clothes. He quickly grabbed a towel from the bathroom and rubbed himself dry. Only then did he settle behind his woman, his legs encasing hers, his arms wrapping around her waist. Breathing deeply of her wild storm scent, he rested his chin in the hollow of her neck and followed the direction of her gaze.

What he saw surprised him.

It shouldn’t have. Her paintings were always vivid. As the All-Seeing Eye, an oracle of the gods and one of their most cherished aides, she could peer into heaven and hell. And did, every night, though she had no control over what she witnessed. Past, present, future, it didn’t matter. Every morning, she painted what she’d seen.

This one was of a man. A warrior, clearly. With that muscle mass, he had to be. A gold collar circled his neck, cinching tight. He was on his knees, legs spread. His arms rested on his thighs, palms raised. His dark head was thrown back, and he was roaring up at a domed ceiling. In pain, perhaps. Maybe even fury. There was blood smeared all over his chest, seeping from multiple wounds. Wounds that looked as if his skin had been carved away.

Then they would reason this out as best they were able. “Was he from heaven or hell?”

A god, then? A few months ago, Titans had overthrown the Greeks and seized control of the divine throne. So, if this man was in Cronus’s throne room, chained up, hurt, and Cronus was leader of the Titans, that must mean the warrior was a Greek. A slave who had been punished, perhaps?

“You saw only this image?” Reyes asked. “Not what got him to this point?”

“Correct,” Danika said with a nod. “I heard him scream, though. It was …” She shuddered, and his arms squeezed her in comfort. “I felt so sorry for him. Never have I heard so much rage and helplessness.”

“We can summon Cronus.” Cronus wasn’t too fond of Reyes and his fellow Lords of the Underworld—the very men who had opened Pandora’s box, unleashing the evil from inside. The men who had then been cursed to carry that evil inside themselves. But the god king hated their enemy, the Hunters, more, because Danika had seen Galen, the leader of the Hunters, chop off Cronus’s head in a vision. Now the god king was determined to kill Galen before Galen could kill him. Even if that meant soliciting the aid of the Lords. “We can ask him if he knows this man.”

A moment passed while Danika pondered his suggestion. Finally, she sighed, nodded. “Yes. I’d like that.” Then she surprised him by turning to him and offering the sweetest smile he’d ever seen. Well, all of her smiles were that way. “But it’s too early in the morning to summon anyone, and besides, I think you had other things on your mind when you entered the room. Why don’t you tell me about them?” she suggested huskily.

He was rock hard in seconds—that’s what she did to him. “That would be my pleasure, angel.”

She pushed him to his back, smile widening. “And mine.”

“Be still, Nike. You’re only making this worse for yourself.” Atlas, Titan god of Strength, stared down at the bane of his existence. Nike, Greek goddess of Strength. His godly counterpart. His enemy. And an all-around grade-A bitch.

Two of his best men held her arms and two held her legs. They should have been able to pin her without incident. She was collared, after all, and that collar prevented her from using any of her immortal powers. Even her legendary strength—strength that was not on par with his, thank you. But never had a female been more stubborn—or more determined to fell him. She continually struggled against their hold, punching, kicking and biting like a cornered animal.

“I will kill you for this,” she growled at him.

“Why? I’m not doing anything to you that you didn’t once have done to me.” Motions clipped, Atlas tore his shirt over his head and tossed it aside, revealing his chest, the ropes of his stomach. There, in the center, in big black letters spanning from one tiny brown nipple to the other, was her name, spelled out for all the world to see. N.I.K.E.

She’d branded him, reduced him to her property.

Had he deserved it? Maybe. Once, he’d been a prisoner in this bleak realm. In Tartarus, a divine dungeon. He’d been a god overthrown and locked away, forgotten, no better than rubbish. He’d wanted out, and he had been willing to do anything to see it done. Anything. So he had seduced Nike, one of his guards, using her feelings for him against her.

Though she would deny it now, she truly had fallen a little in love with him. The proof: she’d arranged his escape, a crime punishable by death. Yet she’d been willing to risk it. For him. Only, just before she could remove his collar, allowing him to flash himself away—moving from one place to another with only a thought—she discovered that he had also seduced several other female guards. Why rely on one to get the job done when four could serve him better?

What he should have done was count on their jealousy.

Nike had realized she’d been used, that his emotions had never really been engaged. Rather than throw him back into his cell and pretend he did not exist, rather than have him beaten, she’d had him held down and marked permanently.

For years he’d dreamed of returning the favor. Sometimes he thought the desire was the only thing that kept him sane as he wiled away century after century in this hellhole. Alone, darkness his only companion.

Imagine his delight when the prison walls began to crack. When the defenses began to crumble. When their collars fell away. It had taken a while, but he and his brethren had finally managed to work their way free. They’d attacked the Greeks, brutally and without mercy.

In a matter of days, they had won.