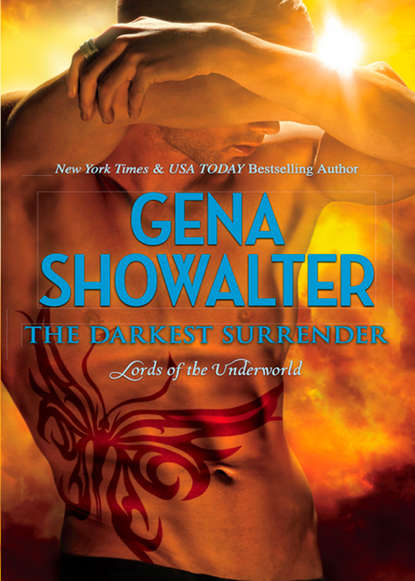 Strider Immortal Keeper of Defeat Nothing comes between him and victory Possessed by the demon of Defeat, Strider suffers unimaginable pain when he loses a challenge. For him, nothing stands in the way of winning. Until Kaia, an enchanting Harpy, tempts him. Kaia must bring home the gold in the Harpy Games competition or die.Strider is a distraction she can t afford, especially as he intends to steal first prize, an ancient magical artifact, before the true victor can be named. But as the competition heats up, only one prize will matter the dangerous, addictive passion neither had thought possible. . . .

The Darkest Night “A fascinating premise, a sexy hero and non-stop action, The Darkest Night is Showalter at her finest, and a fabulous start to an imaginative new series.” —New York Times bestselling author Karen Marie Moning

Gena showalter has done it again.

The Darkest Night is the fabulous start of an edgy, thrilling series …” —Fallen Angels reviews

“Not to be missed … the hottest new paranormal series.”

The Darkest Kiss “In this new chapter the Lords of the Underworld engage in a deadly dance. Anya is a fascinating blend of spunk, arrogance and vulnerability – a perfect match for the tormented Lucien.” —RT Book Reviews, 4½ stars

“Talk about one dark read … If there is one book you must read this year, pick up The Darkest Kiss … a Gena Showalter book is the best of the best.” —Romance Junkies

“Of all the books in this series, this is the most moving and compelling. The concluding chapters will simply stun you with the drama of them … You will not be sorry if you add this to your collection.”

The Darkest Whisper “If you like your paranormal dark and passionately flavoured, this is the series for you.” —RT Book Reviews, 4 stars

The Darkest Passion “Showalter gives her fans another treat, sure to satisfy!” —RT Book Reviews

In a remote fortress in Budapest, immortal warriors—each more dangerously seductive than the last—are bound by an ancient curse none has been able to break. When a powerful enemy returns, they will travel the world in search of a sacred relic of the gods—one that threatens to destroy them all.

New York Times and USA Today bestselling author GENA SHOWALTER has been praised for her “sizzling pageturners” and “utterly spellbinding stories”. She is the author of more than seventeen novels and anthologies, including breathtaking paranormal and contemporary romances, cutting-edge young adult novels and stunning urban fantasy. Readers can’t get enough of her trademark wit and singular imagination.

To donna glass, a real life Bianka Skyhawk. Your support and enthusiasm for the LORDS OF THE UNDERWORLD thrills me more than I can ever say. Thank you, thank you, a thousand times thank you! (Did I mention I’m thankful?) And from all of the warriors currently residing in the Budapest fortress: you’re welcome to come over any time. Gideon adds: And I hope like hell you don’t! Also, Lysander says there’s a cloud with your name on it—next to his.

A million years ago …

(Just depends on who you ask.)

FOR THE FIRST TIME EVER, the bi-century Harpy Games ended with more participants dead than alive, and every single one of the survivors knew fourteen-year-old Kaia Skyhawk was to blame.

The day began innocently enough. With the morning sun shining brightly, Kaia strolled through the overcrowded camp hand in hand with her beloved twin sister, Bianka. Tents of every size littered the area, and multiple fires crackled to ward off the early-morning chill. The scents of filched biscuits and honey coated the air, making her mouth water.

Forever cursed by the gods, Harpies could only eat what they stole or earned. If they ate anything else, they sickened horribly. So Kaia’s breakfast had been a meager affair: a stale rice cake and half a flagon of water, both of which she’d pilfered from a human’s saddle.

Maybe she’d appropriate a biscuit from a member of a rival clan, she mused, then shook her head. No, she’d just have to remain semi-hungry. Her kind didn’t live by many rules, but the ones they had, they revered. Such as: never fall asleep where humans could find you, never reveal a weakness to anyone and, most importantly, never thieve a single morsel of food from one of your own race, even if you hated her.

“Am I the prettiest girl here?”

“Of course.” Kaia didn’t even have to look around to confirm that fact. Bianka was the prettiest girl in the entire world. Sometimes she forgot, though, and had to be reminded.

While Kaia had a disgusting mop of red hair and unremarkable gray-gold eyes, Bianka had luxurious black hair, shimmering amber eyes and was the image of their exalted mother, Tabitha the Vicious.

“Thank you,” Bianka said, grinning with satisfaction. “And I think you’re the strongest. By far.”

Kaia never tired of hearing her sister’s praise. The more powerful a Harpy was, the more respect she earned. From everyone. More than anything, Kaia craved respect. “Stronger, even, than …” She studied the Harpies in the area, searching for someone to compare herself to.

Those who were old enough to participate in the traditional tests of might and cunning bustled about, preparing for the one remaining event—Last Immortal Standing. Swords whistled as they were tugged from sheaths. Metal ground against stone as daggers were sharpened.

Finally, Kaia spotted a contender for her comparison. “Am I stronger, even, than her?” she asked, pointing to a brute of a woman with bulging muscles and thick crisscrossing scars adorning her arms.