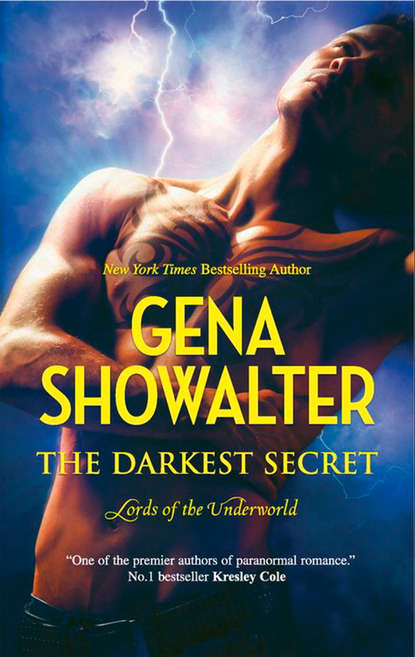 Amun – Immortal Keeper of SecretsHe can manipulate your darkest toughts Chained and isolated to protect those he loves from his terrifying power, death is Amun’s only hope of release – until he meets Haidee, a fellow prisoner whose beauty and vulnerability draw him in…Haidee is a demon-assassin, raised to despise Amun’s kind. Yet how can she hate the man whose touch sparks something dangerously sensual inside her? Haidee also holds the secret to Amun’s salvation. Although to release him she must give herself over – body and soul – to a powerful adversary who has sworn to destroy her.

“A fascinating premise, a sexy hero and non-stop action, The Darkest Night is Showalter at her finest, and a fabulous start to an imaginative new series.” —New York Times bestselling author Karen Marie Moning

Gena Showalter has done it again. The Darkest Night is the fabulous start of an edgy, thrilling series …” —Fallen Angels reviews

“Not to be missed … the hottest new paranormal series.”

The Darkest Kiss “In this new chapter the Lords of the Underworld engage in a deadly dance. Anya is a fascinating blend of spunk, arrogance and vulnerability – a perfect match for the tormented Lucien.” —Romantic Times BOOKreviews, 4½ stars

“Talk about one dark read … If there is one book you must read this year, pick up The Darkest Kiss … a Gena Showalter book is the best of the best.” —Romance Junkies

The Darkest Pleasure “Showalter’s darkly dangerous Lords of the Underworld trilogy, with its tortured characters, comes to a very satisfactory conclusion … [her] compelling universe contains the possibility of more stories to be told.” —Romantic Times BOOKreviews, 4 stars

“Of all the books in this series, this is the most moving and compelling. The concluding chapters will simply stun you with the drama of them … You will not be sorry if you add this to your collection.”

—Mists and StarsTheDarkest Whisper “If you like your paranormal dark and passionately flavoured, this is the series for you.”

The Darkest Passion “Showalter gives her fans another treat, sure to satisfy!” —Romantic Times BOOKreviews

In a remote fortress in Budapest, immortal warriors—each more dangerously seductive than the last—are bound by an ancient curse none has been able to break. When a powerful enemy returns, they will travel the world in search of a sacred relic of the gods—one that threatens to destroy them all.

New York Times and USA Today bestselling author GENA SHOWALTER has been praised for her “sizzling page-turners” and “utterly spellbinding stories”. She is the author of more than seventeen novels and anthologies, including breathtaking paranormal and contemporary romances, cutting-edge young adult novels and stunning urban fantasy. Readers can’t get enough of her trademark wit and singular imagination.

I was writing this book when my cherished friend, Donnell Epperson, died. She was a woman of unwavering faith and deep love, who dreamed of being a published author. Tragically, she died before that dream could be realised. And that’s a shame (or a Glorious Misfortune, as she would have said with a beautiful and slightly wicked smile). She was truly gifted and utterly dedicated, and I like to think she was with me as I wrote this.

And so, this one is for you, my friend. And when Jill, Sheila and I get to heaven, I have a feeling we’ll be arguing about where our mansions are placed. I call dibs on the middle. Just sayin’. Until then, I continue to miss you with all my heart. Save me a hug, and maybe tell the Big Man I’m not so bad. Sometimes. Meanwhile, it’s no secret that I will always love you.

STRIDER, KEEPER OF THE DEMON of Defeat, burst through the towering front doors of the Budapest fortress he shared with a growing cast of friends—brothers and sisters by circumstance rather than blood, but all the closer for it—fighting a rush of undeniable pleasure.

He’d freaking done it, man. Done. It. After chasing his enemy cross-continent, bargaining away one of the four godly relics needed to find and destroy Pandora’s box—and yeah, he was gonna get spanked hard for that—then, after being eaten alive by insects and at one point (cough) walking into a chick’s knife (cough), he’d finally won. And damn if he wasn’t ready to celebrate.

“I’m king of the world, bitches. Come in here and bask in my glory.” His voice echoed through the foyer, expectant, eager.

No one returned the greeting.

Still. Grinning, he shifted the unconscious female draped over his shoulder into a more comfortable position. More comfortable for him. She was the enemy he’d been chasing, as well as the chick who’d oh, so impolitely introduced his pancreas to the freaking hilt of her blade. He could hardly wait to tell everyone that he’d done what they hadn’t. He’d bagged and tagged her, baby.

He called, “Daddy’s home. Somebody? Anybody?”

Again, there was no response. His grin dulled a bit.

Damn it. When he lost a single challenge, he battled crippling pain for days. When he won, though … gods, it was almost a sexual high, energy buzzing in his veins, heating him, priming him. That kind of enthusiasm called for a playmate. And, hell, twelve warriors and their menagerie of female companions lived here, yet no one had waited around to welcome him home? Even though the grounds were now gated, monitored and someone had had to punch him in, like, five minutes ago?