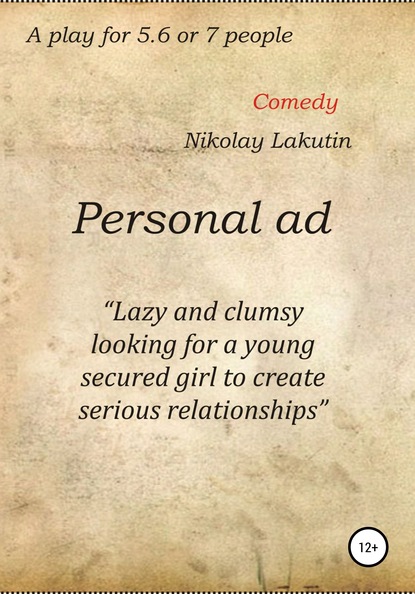 Nikolay Lakutin
Personal ad. A play for 5.6 or 7 people

Personal ad. A play for 5.6 or 7 people
Nikolay Lakutin

How would You describe yourself if you were planning to place your ad on a Dating site? Would you write everything honestly, without embellishment, as it is, with all the flaws and nuances? Our hero decided on such a crazy act. Do you want to know what happened? Then we offer you the Comedy "Honest ad"

One intermission is possible after the first act.

YURA-the son, "sitting on the neck" of the mother. Tall fellow 36 years old.

SANEK is a friend of Yura, a pet of fate, about 40 years old.

DARIA is the first candidate for a relationship, 28 years old.

ARINA is the second candidate for a relationship, 35 years old.

MILANA is the third candidate for a relationship, 42 years old.

KAPITOLINA is the fourth candidate for a relationship, 18 years old.

Not all female roles of candidates for relationships overlap, they can be played by 4.3 or 2 Actresses.

Yura's Hobbies are fooling, making faces, gesticulating, and imitating. Therefore, special attention should be paid to the roles of this character in relation to the clarity of facial expressions and artistry in General. This is important!

A table, two stools (strong, will" fly"), a sofa, a TV, a wardrobe (not heavy, so that my mother could move it), bookshelves (one of which will later move) things and other attributes corresponding to a residential home is not rich environment.

Plays a quiet relaxing music. Not a bright light.

In an apron, cheerful all in the process of cooking, a short mother bustles into the room. Carries a saucer with sliced bread. He puts it on the table and hurries to the kitchen.

After a while, my mother reappears, holding a pot and chopping Board. Puts everything on the table, hurries to the kitchen, brings in two spoons, a salt shaker, napkins. Stands, looks carefully at the table, calculates something. She remembers that she hasn't reported it yet, runs to the kitchen, and returns with a teapot and two mugs. He looks at the table with satisfaction.

He takes off his apron, turns around, and calls his son.

MOTHER (affectionately, loving, caring): Yuri? Son? Time to get up. The porridge is getting cold. (Passes through the room, puts two stools to the table, turns around, sees that the son has not yet come, continues to call) Yurochka Wake up, dear, Breakfast is ready!

With a face swollen from sleep, in half-lowered family underpants of a very intricate style, which his mother – an old woman obviously sewed for him (it is highly desirable to make an order or sew something non-standard fun on their own), yawning and stretching, reluctantly, a lout – son, a tall fellow, passes into the hall. In his hand, he has a crumpled t-shirt, which he tries to straighten and determine where there is a front and where the back. Puts it on, but, as it turns out, on the left side. Thick seams of the fabric clearly protrude, attracting attention.

MOTHER (affectionately, loving, caring): Son, please come to the table, how did you sleep? You don't look happy. Did you have a bad dream?

YURA (yawning): No, not really… The dream is just fine. Even well there all was, but little.

MOTHER (curiously): How interesting, but what was the dream? What's not enough?

Yura looks at his mother with a strange look. He is confused, and knows that he shouldn't have said that just now.

YURA (wagging): Nuuu… how to say… (Dramatically changes the tactics on the attack, drawing attention to the table) I didn't bring any plates! Mom, what am I going to eat out of?

The old mother draws attention to her mistake and throws up her hands in frustration.

MOTHER (vexedly): Oh, I'm all worked up. Now, dear, now everything will be all right.

The mother runs to the kitchen and returns with two plates. She takes care of her son, puts him first, puts a plate in front of him, puts a spoon, ties him a napkin (or a handkerchief at the discretion of the Director). He sits down opposite me. He starts eating Breakfast.

The mother eats, not too loudly and clearly, but still chomping.

The son sits, does not eat, and sends passes of mimic gestures of disapproval in the direction of the mother with gentle glances.

The mother pays attention to this. She's worried.

MOTHER (annoyed): What is it, dear?

YURA (prevaricating): I don't know how to say it…

Mom sighs with relief, preparing for something more weighty.

JURA (on the nerves): It doesn't work very well!

My mother shrugs guiltily and continues to eat. The chomping sounds come up from time to time.

JURA (convoluted, making faces): It may sound a little strange, it may even be rude, and I admit that it may even be outrageous, but … Listen… And you couldn't eat somewhere out there… in the kitchen, for example, because you're losing your appetite, and Breakfast is the most important food, as you said yourself…

My mother humbly takes her Cup and spoon and leaves the table.