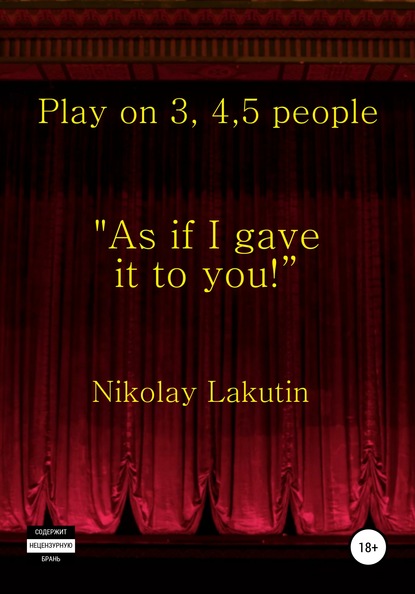 As if I gave it to you! As if she did! How many meanings do You see in this phrase? One? Two? The characters of this play will tell You about the three meanings of this expression. They will tell you, show you and provide you with a choice of the scenario that is close to You! Enjoy your dive… Содержит нецензурную брань.

MASHA is my wife's friend;

IGOR is a friend of my husband.

HERMAN is my wife's first love.

Male roles do not overlap, three or two male roles can be played by one actor.

Family atmosphere. Sofa, wardrobe, table, three chairs, bookshelves, chest of drawers. Something is lying somewhere, something is standing somewhere. The apartment is not inhabited by perfectionists, and this is a very understatement.

From behind the scenes, an iron bowl with the remains of borscht flies into the room, followed by a pan and clangs on the floor. Splashes of water and some of the reddish contents are scattered across the stage.

STANISLAV'S ANGRY CRY IS HEARD: Yes etit your left! How long has it been possible? All the salt of Russia (Italy, Germany… – possible options for the countries where the production is taking place), it seems to be in this pot! Galya! (the Cry with amplification) Galya!!! My wife is the mother of my unborn children fortunately! (Maliciously) Where are you, joy!

I HEAR GALINA's VOICE: Well, what do you want, well, I'm here, well?

There is a scream of Galina passing to a screech.

CREEK STUPNIKOVA: Come from? Well, my beloved salt shaker… As promised. Get it-sign it!

Galina screams out of the wings, rushes across the stage and disappears on the other side of the stage. Behind her, with a ladle in his hand, rushes the enraged husband, hiding in the same place behind the scenes.

I hear the sound of clothing tearing.

STANISLAV's VOICE FROM behind the SCENES (confused): Oops…

There is a scream from Galina that turns into a screech, only even more furious.

Stanislav skips out of the wings, looks around warily, and rushes across the stage backstage again. Behind him, in a torn dress, Galina rushes furiously and ferociously with a ladle in one hand and a slipper in the other. One of her Slippers was stuck on her foot, and the other was bare. The torn dress hangs down, gets in the way, she always corrects it, tries to hold it, catches up with her husband.

The couple hides behind the scenes.

Galina enters the stage with a floor rag in her hand. Throws a rag, picks up a pot, a bowl. He nods his head in resignation.

GALINA: Run away, parasite. Well, Stas, well I'll get you back…

Wipes the soup off the floor.

Masha enters the apartment, stops in confusion, looking at the picture of what is happening.

Galina notices her guest, wiping the sweat from her brow.

GALINA: Oh, hi, Mashun. What are your fates?

MASHA (with interest): Tick, Hello. I was just … walking by, so I think I'll go see my friend. Why are you all this… this… huh?

GALINA: Yes… (sighs, continues to wipe the floor). I had a little argument with my husband.

MASHA (with interest): Wow, a little…

GALINA: Believe me, my friend, it's still a little bit! When there is a lot, then there is no rag to eliminate the consequences. We have to call a team of finishers, buy new appliances, sometimes furniture… in General, everything is family-style. Well, you don't understand, you're a free bird.

MASHA: Yes… No, I actually sometimes start to think seriously about starting a family. Husband there, children, well, like everyone else. Then I come to visit you and…

GALINA: Yes, I understand. Not start.

MASHA: I don't blame you, live as you want, but I don't want to do it like this (he gestures at the wreckage) in a family way.

GALINA: if you don't want to, don't. No one forces you to.

Galina puts the rag aside and sits down on the floor more comfortably.

GALINA: In General, while I was cooking borscht, I added extra salt once. Apparently. Well, she did. We were talking on the phone at the moment.