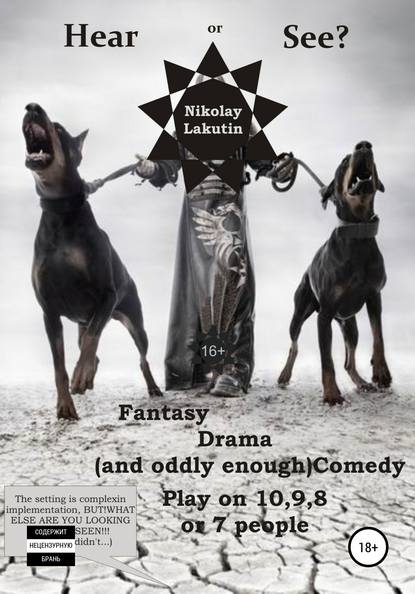 What is your priority? Hear or see? Each of You has made a certain choice in your time. Based on this, the worldview, attitude, and goals were formed… The hero of this story did not differ from most people in his choice. He lived quite a "beautiful" life in happy ignorance. And he might have lived a good life if it hadn't happened to him one day… Содержит нецензурную брань.

A play in two acts.

PHILIP GEORGIEVICH-Director of the company, "happy owner" of the gift;

VACHAGAN-the question of who he is remains open to the viewer (the voice of the actor is required mysterious, voluminous);

JULIA – the mistress of Philip;

ANTON is an employee of the company, Logist;

YURI-employee of the company, Manager;

GENNADIEVICH-an employee of the company, a driver (preferably a tall actor with a tummy);

The play provides a record (the true thoughts of the characters) of almost all the characters. The sound engineer has a very serious job to do, but it's worth it.

The combination of roles:

Vachagan, Gennadievich and the lover of Yulechka or Vachagan and the lover can be played by one actor, at the discretion of the Director.

Mark and Yuri or mark and Anton are also interchangeable roles.

ATTRIBUTES REQUIRED FOR THE STATEMENT:

Three office desks, three office chairs, three laptops, an office phone, an office sofa, a cooler with a water bottle, a pile of documents. Scenography of the working office environment at the discretion of the Director.

The play also involves two different living spaces (no frills). Wardrobe, bed, chair, table, the rest is at the discretion of the Director.

Safe fireworks that spray fireworks in a diameter of no more than 2 sq. m. (highly desirable)

For setting will require two large trained sheep dogs!!! (it is highly desirable), otherwise dummies or children dressed in authentic dog costumes will do, but the effect will not be the same.

The time of year of events is autumn (September – October)

Due to the complexity of this statement, the contract will provide for possible minor changes.

A small office sofa for visitors, on which, snoring, huddles heavy driver Gennady. Work desks, laptops at which the Manager Yuri and logistician Anton sit impressively, they are interested in a computer game of tanks, play with each other over the network. The noise of gunfire and the roar of engines comes from their computers. Accountant Natalia is engaged in pedicure, throwing her bare foot on her Desk, carefully displays the coating on her nails, while talking on a mobile phone with a friend, holding the phone with her shoulder to her ear. With all this, the working phone tube is torn, but there is no one to take it, everyone is "very busy".

Finally, Natalia can't stand it, glancing at the work phone several times and looking around, then picks up the phone.

NATALIA: (politely to your mobile) snezhinochka, could you wait a second. The phone is ringing under my ear, I can't hear you at all.

He puts down his mobile phone and puts the work phone to his ear.

NATALIA: (sternly, defiantly, boorishly) Yes! What do you want?

NATALIA: (sternly, defiantly, boorishly) Yuri can't come to the phone right now, he has it… negotiations!

NATALIA: (sternly, defiantly, boorishly) Anton is also busy right now. Do you think we sit around here all day waiting for your call? Avral, that you as a small! Call back in a minute… two hours.

Natalia looks doubtfully at the guys, who only begin to beat their fingers harder on the keyboard, their enthusiasm only increases.

NATALIA: (already moderately, without irritation) Although you know, call back better later in the evening, or even better tomorrow morning. I'll tell them you called, and if they're free, they'll call you back early. Good day.

Natalya hangs up, shakes her head in disapproval, and shouts at the guys.

From the scream, the driver shudders on the couch, marking his experience of this gadfly with a particularly loud snore.

One of the guys reluctantly turns to Natalia.

NATALIA: (angrily) Yura, my e-my, I'm an accountant, not a Manager, why do your clients call me all the time, distract from work!

There is an explosive, furious, victorious laugh from Anton, who jumps up from his chair and gestures humiliatingly (preferably decently) at Yuri.