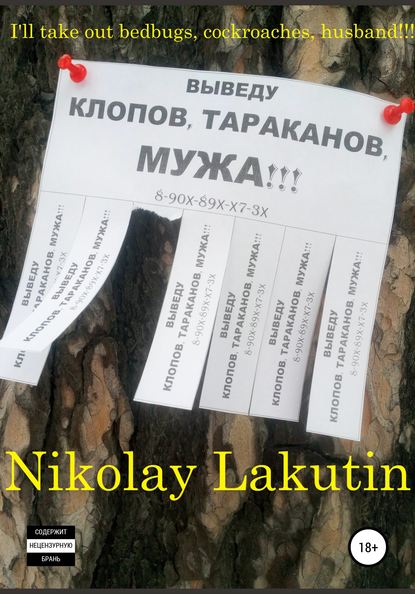 No, it can't go on like this. Almost eight years of my life, I gave to this man and what in the end? God knows-I have long suffered, hoped, waited for something… But now all. Something must be decided. But how to make everything so that most to remain aside, and not to fall under the blow of anger with the subsequent annual censures? About… announcement: "I will Withdraw bedbugs, cockroaches, husband!!!". Interesting… call…Содержит нецензурную брань.

Svetlana returned from work in a traditionally depressed mood. You know, there is a very small percentage of people who are happy to go to work in the morning, and in the evening happy to return home? She wasn't one of them. So should we rejoice? Work-so-so, not enviable. Payment and worse. On a personal front… not to say that bad, but… Word-married.

On this dramatic note, it would be possible to finish this story, familiar in the lives of many, if not for one amusing incident that occurred on the evening of this day.

Having crossed a threshold of the apartment, Svetlana froze on a place, still mechanically holding a half-closed door. The apartment was in complete chaos, chaos and devastation. In a fairly expressionist style with a pronounced note of protest, with a light hand of the master were scattered things. There were chairs, broken dishes with the remains of food beautifully decorated the empty space on the floor. The table was presented to the review in an unconventional, somehow on the side and not in the room where faith and truth served as the mistress of recent years. On TV in the midst was a porn video film, which judging by the increasing cries, was approaching the climax. On a sofa in an embrace with a floor lamp in the most ridiculous pose the sleeping man in which Svetlana not at once lay, but all-recognized the husband. From clothes on it were only barely holding briefs and one sock. In the hand of hubby sported a half-full bottle.

– Holy shit… – assessing the situation, finally said the landlady, narrowed eyes, is to me just a day was. After all, before the change of General cleaning did.

Closing the door behind him and passing through the apartment, pushing his boots a passage from the garbage, Svetlana first turned off the porn movie, having sincerely envied the heroine of the plot. After turned his attention to the sleeping on the couch of her husband. She looked at him fondly, and passed, barely stepping, so as not to Wake him with her hands pressed to her breast, smiling as if touching a newborn. But this gentle caring and gentle eyes, glancing at the frail body from head to tip of hanging the sock was not out of love… Wife enjoyed the anticipation of the unexpected moment a fierce and victorious attack!

Dramatically changed in the face and actions, Svetlana begin with there is the strength to beat her husband with a handbag.

– A bastard, a parasite all my life I ruined! How much can you tolerate this mockery. How long can you sit on the neck of his wife! You don't work, you don't do shit around the house! You spend it all, you get it dirty and you destroy it! – shouted angry to an extreme degree wife.

With a dull ringing falling on his knees next to the sofa, Svetlana burst into tears. Only now, slowly, reluctantly began to Wake up her husband, Kesha, completely not noticing that he was severely punished for ladies attribute on the back and around the next growing.

– Ooh… my love came. I've missed you so much. Come to me quickly, I you… – mooing, incoherent drunk speech roared hubby.

Finish Kesha had not, since was knocked out of the women's purse on the head, and then turned off. The valuable thought was never brought to the attention of the wife.

– And like this for almost eight years. Well, that's what to do with it? I threw it and kicked out and filed for divorce… nothing helps! Fucking flint! – Svetlana thought, looking at the object of her love.

Getting up from the floor and trying to gain strength for a cleaning March through the apartment, Svetlana began cleaning. Among the rubbish she had fallen into the hands of a newspaper. And somehow not gone past the eyes of the ad on the turn:

At first, the woman smiled, not taking it seriously. She even put the paper aside. But then she allowed the thought that it might not be a joke, and opened the desired spread, read the ad a few more times.

And here is the tired face of a tortured woman began to spread out into a wide devious smile. Svetlana looked at the drunken Murlo lying on the couch,

took the phone and strongly typed indicated in the announcement room.

– Hello? Hello! My ad. Yes. Hi. Yes, your services are required. Would like to withdraw. No, there are no roaches. No, thank God no bedbugs either. Here, the husband is just there, and I would like to avoid. Let's meet. Write.

Quickly finding at hand some piece and a pencil, the woman wrote down the address and time.

– Understood. Good. I'll be there in an hour to discuss it!

Having hung up, Svetlana for the first time in several years felt light at the end of the tunnel. It was a light of hope. It is not yet clear what exactly, but still… it was the light of hope that change in her life is still possible.

Having cleaned herself up, full of determination and strength, almost in my mind is not the wife left the apartment, busily throwing her purse over his shoulder.

At the designated table in the cafe sat Nikita, a nice guy with a good appearance, drinking coffee. Svetlana entered the cafe. Nikita waved her hand, Svetlana waved back and went to the guy.

– Is that you? – having stopped at a table, the lady asked.

– Hello, you Svetlana? – with a question answered Nikita.

Nikita felt the appraising look of a potential client, who did not talk about trust, given Nikita's young appearance. Guy nodded, understanding the point is not voiced the question, and hastened to explain:

– I understand your expression. Well, I can answer that. I am twenty-eight years old, young enough to understand the majority, to deal with issues of this nature, but complaints have not yet been received. I can give my clients contacts so that you can hear real feedback about my work.

– Look, I admit cockroaches and whatnot…

– Here! Bedbugs and cockroaches you are able to withdraw any chemistry is now there is no problem, but how are you going to erase her husband? What kind of ad is that? Who even thought of that?

Nikita expected this question and gave him a comprehensive explanation:

– Very often husbands cause much more trouble and even harm to the house, nerves, neighbors and, for that matter – to society, than cockroaches and bedbugs. And from the fact that you're here, you know as well as I do!

The answer of the guy gave Svetlana the ground for reflection. Realizing how accurate the words of the guy, she nodded in agreement. The conversation went in the right direction.

– But in order to effectively, and most importantly – competently get rid of her husband, I need to have facts about it. Explore weaknesses so they can be applied to the benefit of the common cause.

– You speak for the benefit of the common cause? For me – maybe Yes, for you – of course, too, it's your bread, but what good will it do for my husband? He'll be lost without me, won't he? It was because of pity for him that I could not get rid of him on my own. Live a long time as neighbors, wasting your time on him, and throw the hand does not rise.

Svetlana was distracted by the waiter, quickly ordered a coffee and added:

– Yes, and what a hand will rise, with him nailed to the sofa weighs a good eighty-five pounds.

Nikita calmly looked at her sincerely and she was offered:

– Explain what benefits of this event will be directly to your husband?

– No problem, I'll explain. The reasons why women no longer want to live together with their once chosen one are quite trivial and typical. Not always the root of the problem is the cold feelings. It's more of an investigation. And the reason, as a rule, is a lot of little things.

– Details? – the client interrupted, – when the husband sits down on a neck to the wife and parasites in the pleasure, it is trifles?

– This is a consequence, – quietly responded Nikita.