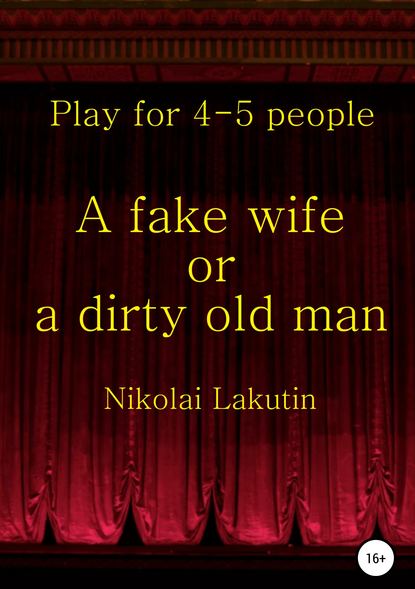 Nikolay Lakutin
A fake wife or a dirty old man. Play for 4-5 people

A fake wife or a dirty old man. Play for 4-5 people
Nikolay Lakutin

What will be the most terrible test for a young family? Crisis of the year? Three? Five years? Dissection of lost sight of bad habits and the true face of the partner? Can be, any secret addictions spouse (spouse) or, in late all, affiliation to secret societies? Sects? No! All this is nonsense compared to only one person, a dirty old man…

Attention! All copyrights to the play are protected by the laws of Russia, international legislation, and belong to the author. Its publication and reissue, reproduction, public performance, translation into foreign languages, changes in the text of the play when staged without the written permission of the author are prohibited. Staging of the play is possible only after the conclusion of a direct contract between the author and the theater.

ILYA is a newlywed, about 30 years old;

NATALIA is a newlywed, about 30 years old;

INGA is a friend of the wife, about 35 years;

Inga and Oksana can be played by one person.

Twilight. Intimate atmosphere. A large double bed is waiting in the wings.

On stage, under the rhythmic music sexually, as in the best strip bars, Natalia effectively comes out. Throws off her blouse, slowly begins to dance to unbutton the button on his jeans and already takes up the zipper.

After her in a dashing rhythmic dance comes on stage Ilya. He unbuttons his shirt as he goes, twirls it over his head, and throws it somewhere in free flight. Stand out in front of each other who is on that much, trying as much as possible to have a partner.

Moment " X " couple rushes to each other, and throw themselves in an unknown languor on the bed. The lights go out, and the rising music is interrupted by the old man's loud, long, unnatural cough.

Turns on the light, in the room with a stick in his hand stands grandfather, wiping his glasses with his other hand.

GRANDFATHER: AND I still think that some of my Ilushenko long. Again, I suppose, the girls went on a sex spree.

Looking with contempt at the couple hiding behind the blanket.

GRANDFATHER: Well tooooooo. Are you even protecting yourself, granddaughter? This one looks pale. Sick for sure. Aunt Irka something died, in skin-venereal garters more there. You can't joke about it now… cannot…

Ilya jumps out of bed, furious. He tries in every possible way to cope with himself, so as not to say too much to his own grandfather, who got him no less than Natalia.

Ilya finds his shirt, throws it on, pulls up his pants.

ILYA (with hard, but maximally politely): Listen to grandfather… (tries to hands in the air strangle and Unscrew and strangle and all that only can be, until an old man not sees) Expensive my grandfather…

The old man turns to his grandson, grunting softly.

ILYA: Let me ask you something. (Shouts at the top of his voice, unable to control his emotions) What the hell are you doing here? (he points to his wife, who hastily leaves the place of unfulfilled joys) What kind of girl is she to you? It's my wife! For a week and three days this is my lawful wife! Not only that, the envelope to the wedding gave a blank, so even I had to scoff. Calm down already! We didn't do anything illegal with her.

NATALIE (sternly, in a low voice): not Yet done!

ILYA: Until not have made, here is-here is. But I can't promise you, my dear man, that it won't happen! Why the hell are you running around like a Ghost? Crawl out from behind some cabinets, then you will find under the bed, then hide behind the curtain. What are you, grandfather, I spy a child is not played enough? (Maximally emotionally) This is my life! This is my personal life!!!

The old man and Ilya look at each other, then looking away, then again turning visually to the opponent.

GRANDFATHER (as if nothing had happened): Yes…, I what went something. Going to the store, the bread is present. Maybe you want something? You want straws? Remember how you loved her? I remember. Happened, and money is not present, and all the same you will reserve, though one packing for the granddaughter Yes you will rescue. Crackled be healthy! So, that for ears crunched… I have. Still crunching. Can't I hear you?"

Ilya sits on the bed, his wife enters the room, sits next to him.

The girl looks at her husband reproachfully.

NATALIA: are you Kidding me?

ILYA: Yes, there is. I just don't know what to do with this filthy old man. What a pain.

NATALIA: I told you that you need to live separately, that otherwise nothing will happen. Will all the time to climb… climb… climb.

ILYA: I all understand, nice, but and you me understand. Me for a wedding loan for several years to extinguish. And with my salary, a mortgage is out of the question. (Affectionately call) But after all most importantly nor where you, and with whom you. Isn't that right?"

Ilya hugs his wife, she hugs Ilya in response, begin to kiss, fall on the bed.

The old man returns to the room.

GRANDFATHER: why did you decide that this is exactly what I presented at the wedding of an empty envelope, he was not signed?

Natalya rushes from her seat.

NATALIA: No, it's impossible!

The girl runs away.

ILYA (indignantly): Grandfather, you here that whether still. What is it? (Slyly and somewhat maliciously) how do you know the envelope wasn't signed?