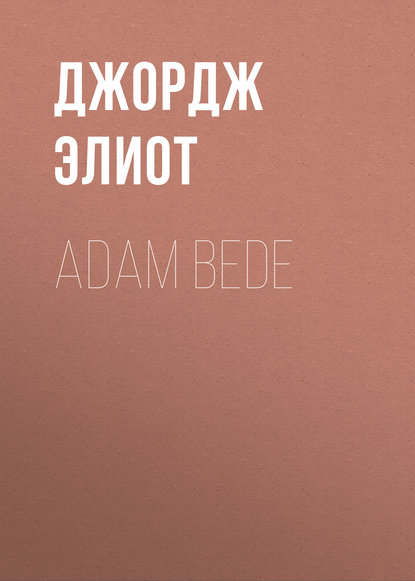 With a single drop of ink for a mirror, the Egyptian sorcerer undertakes to reveal to any chance comer far-reaching visions of the past. This is what I undertake to do for you, reader. With this drop of ink at the end of my pen, I will show you the roomy workshop of Mr. Jonathan Burge, carpenter and builder, in the village of Hayslope, as it appeared on the eighteenth of June, in the year of our Lord 1799.

The afternoon sun was warm on the five workmen there, busy upon doors and window-frames and wainscoting. A scent of pine-wood from a tentlike pile of planks outside the open door mingled itself with the scent of the elder-bushes which were spreading their summer snow close to the open window opposite; the slanting sunbeams shone through the transparent shavings that flew before the steady plane, and lit up the fine grain of the oak panelling which stood propped against the wall. On a heap of those soft shavings a rough, grey shepherd dog had made himself a pleasant bed, and was lying with his nose between his fore-paws, occasionally wrinkling his brows to cast a glance at the tallest of the five workmen, who was carving a shield in the centre of a wooden mantelpiece. It was to this workman that the strong barytone belonged which was heard above the sound of plane and hammer singing—

Awake, my soul, and with the sun
Thy daily stage of duty run;
Shake off dull sloth…

Here some measurement was to be taken which required more concentrated attention, and the sonorous voice subsided into a low whistle; but it presently broke out again with renewed vigour—

Let all thy converse be sincere,
Thy conscience as the noonday clear.

Such a voice could only come from a broad chest, and the broad chest belonged to a large-boned, muscular man nearly six feet high, with a back so flat and a head so well poised that when he drew himself up to take a more distant survey of his work, he had the air of a soldier standing at ease. The sleeve rolled up above the elbow showed an arm that was likely to win the prize for feats of strength; yet the long supple hand, with its broad finger-tips, looked ready for works of skill. In his tall stalwartness Adam Bede was a Saxon, and justified his name; but the jet-black hair, made the more noticeable by its contrast with the light paper cap, and the keen glance of the dark eyes that shone from under strongly marked, prominent and mobile eyebrows, indicated a mixture of Celtic blood. The face was large and roughly hewn, and when in repose had no other beauty than such as belongs to an expression of good-humoured honest intelligence.

It is clear at a glance that the next workman is Adam’s brother. He is nearly as tall; he has the same type of features, the same hue of hair and complexion; but the strength of the family likeness seems only to render more conspicuous the remarkable difference of expression both in form and face. Seth’s broad shoulders have a slight stoop; his eyes are grey; his eyebrows have less prominence and more repose than his brother’s; and his glance, instead of being keen, is confiding and benign. He has thrown off his paper cap, and you see that his hair is not thick and straight, like Adam’s, but thin and wavy, allowing you to discern the exact contour of a coronal arch that predominates very decidedly over the brow.

The idle tramps always felt sure they could get a copper from Seth; they scarcely ever spoke to Adam.

The concert of the tools and Adam’s voice was at last broken by Seth, who, lifting the door at which he had been working intently, placed it against the wall, and said, “There! I’ve finished my door to-day, anyhow.”

The workmen all looked up; Jim Salt, a burly, red-haired man known as Sandy Jim, paused from his planing, and Adam said to Seth, with a sharp glance of surprise, “What! Dost think thee’st finished the door?”

A loud roar of laughter from the other three workmen made Seth look round confusedly. Adam did not join in the laughter, but there was a slight smile on his face as he said, in a gentler tone than before, “Why, thee’st forgot the panels.”

The laughter burst out afresh as Seth clapped his hands to his head, and coloured over brow and crown.

“Nonsense!” said Adam. “Let it alone, Ben Cranage. You’ll mayhap be making such a slip yourself some day; you’ll laugh o’ th’ other side o’ your mouth then.”

“Catch me at it, Adam. It’ll be a good while afore my head’s full o’ th’ Methodies,” said Ben.

Ben, however, had now got the “red pot” in his hand, and was about to begin writing his inscription, making, by way of preliminary, an imaginary S in the air.

“Let it alone, will you?” Adam called out, laying down his tools, striding up to Ben, and seizing his right shoulder. “Let it alone, or I’ll shake the soul out o’ your body.”

Ben shook in Adam’s iron grasp, but, like a plucky small man as he was, he didn’t mean to give in. With his left hand he snatched the brush from his powerless right, and made a movement as if he would perform the feat of writing with his left. In a moment Adam turned him round, seized his other shoulder, and, pushing him along, pinned him against the wall. But now Seth spoke.

“Let be, Addy, let be. Ben will be joking. Why, he’s i’ the right to laugh at me—I canna help laughing at myself.”

“I shan’t loose him till he promises to let the door alone,” said Adam.

“Come, Ben, lad,” said Seth, in a persuasive tone, “don’t let’s have a quarrel about it. You know Adam will have his way. You may’s well try to turn a waggon in a narrow lane. Say you’ll leave the door alone, and make an end on’t.”

“Come, that’s wise of you, Ben,” said Adam, laughing and relaxing his grasp.

They all returned to their work now; but Wiry Ben, having had the worst in the bodily contest, was bent on retrieving that humiliation by a success in sarcasm.

“Which was ye thinkin’ on, Seth,” he began—“the pretty parson’s face or her sarmunt, when ye forgot the panels?”

“Come and hear her, Ben,” said Seth, good-humouredly; “she’s going to preach on the Green to-night; happen ye’d get something to think on yourself then, instead o’ those wicked songs you’re so fond on. Ye might get religion, and that ‘ud be the best day’s earnings y’ ever made.”

“All i’ good time for that, Seth; I’ll think about that when I’m a-goin’ to settle i’ life; bachelors doesn’t want such heavy earnin’s. Happen I shall do the coortin’ an’ the religion both together, as YE do, Seth; but ye wouldna ha’ me get converted an’ chop in atween ye an’ the pretty preacher, an’ carry her aff?”

“No fear o’ that, Ben; she’s neither for you nor for me to win, I doubt. Only you come and hear her, and you won’t speak lightly on her again.”

“Well, I’m half a mind t’ ha’ a look at her to-night, if there isn’t good company at th’ Holly Bush. What’ll she take for her text? Happen ye can tell me, Seth, if so be as I shouldna come up i’ time for’t. Will’t be—what come ye out for to see? A prophetess? Yea, I say unto you, and more than a prophetess—a uncommon pretty young woman.”

“Nay, I’m not turnin’ noway. I said nought about the women preachin’. I said, You let the Bible alone: you’ve got a jest-book, han’t you, as you’re rare and proud on? Keep your dirty fingers to that.”

“Why, y’ are gettin’ as big a saint as Seth. Y’ are goin’ to th’ preachin’ to-night, I should think. Ye’ll do finely t’ lead the singin’. But I don’ know what Parson Irwine ‘ull say at his gran’ favright Adam Bede a-turnin’ Methody.”

“Never do you bother yourself about me, Ben. I’m not a-going to turn Methodist any more nor you are—though it’s like enough you’ll turn to something worse. Mester Irwine’s got more sense nor to meddle wi’ people’s doing as they like in religion. That’s between themselves and God, as he’s said to me many a time.”

“Aye, aye; but he’s none so fond o’ your dissenters, for all that.”

“Maybe; I’m none so fond o’ Josh Tod’s thick ale, but I don’t hinder you from making a fool o’ yourself wi’t.”

There was a laugh at this thrust of Adam’s, but Seth said, very seriously. “Nay, nay, Addy, thee mustna say as anybody’s religion’s like thick ale. Thee dostna believe but what the dissenters and the Methodists have got the root o’ the matter as well as the church folks.”

“Nay, Seth, lad; I’m not for laughing at no man’s religion. Let ‘em follow their consciences, that’s all. Only I think it ‘ud be better if their consciences ‘ud let ‘em stay quiet i’ the church—there’s a deal to be learnt there. And there’s such a thing as being oversperitial; we must have something beside Gospel i’ this world. Look at the canals, an’ th’ aqueduc’s, an’ th’ coal-pit engines, and Arkwright’s mills there at Cromford; a man must learn summat beside Gospel to make them things, I reckon. But t’ hear some o’ them preachers, you’d think as a man must be doing nothing all’s life but shutting’s eyes and looking what’s agoing on inside him. I know a man must have the love o’ God in his soul, and the Bible’s God’s word. But what does the Bible say? Why, it says as God put his sperrit into the workman as built the tabernacle, to make him do all the carved work and things as wanted a nice hand. And this is my way o’ looking at it: there’s the sperrit o’ God in all things and all times—weekday as well as Sunday—and i’ the great works and inventions, and i’ the figuring and the mechanics. And God helps us with our headpieces and our hands as well as with our souls; and if a man does bits o’ jobs out o’ working hours—builds a oven for ‘s wife to save her from going to the bakehouse, or scrats at his bit o’ garden and makes two potatoes grow istead o’ one, he’s doin’ more good, and he’s just as near to God, as if he was running after some preacher and a-praying and a-groaning.”

“Well done, Adam!” said Sandy Jim, who had paused from his planing to shift his planks while Adam was speaking; “that’s the best sarmunt I’ve heared this long while. By th’ same token, my wife’s been a-plaguin’ on me to build her a oven this twelvemont.”

“There’s reason in what thee say’st, Adam,” observed Seth, gravely. “But thee know’st thyself as it’s hearing the preachers thee find’st so much fault with has turned many an idle fellow into an industrious un. It’s the preacher as empties th’ alehouse; and if a man gets religion, he’ll do his work none the worse for that.”