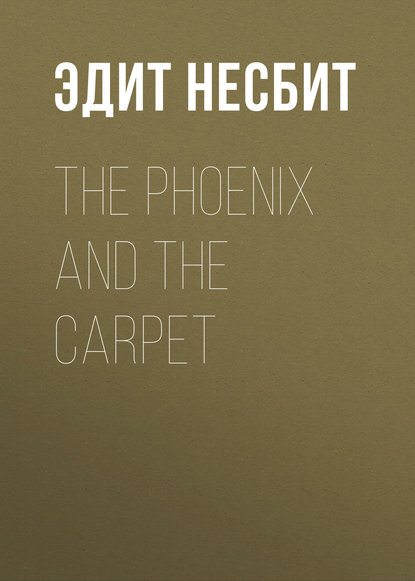 The Phoenix and the Carpet

Dear Hubert, if I ever found
A wishing-carpet lying round,
I’d stand upon it, and I’d say:
‘Take me to Hubert, right away!’
And then we’d travel very far
To where the magic countries are
That you and I will never see,
And choose the loveliest gifts for you, from me.
But oh! alack! and well-a-day!
No wishing-carpets come my way.
I never found a Phoenix yet,
And Psammeads are so hard to get!
So I give you nothing fine—
Only this book your book and mine,
And hers, whose name by yours is set;
Your book, my book, the book of Margaret!

It began with the day when it was almost the Fifth of November, and a doubt arose in some breast—Robert’s, I fancy—as to the quality of the fireworks laid in for the Guy Fawkes celebration.

‘They were jolly cheap,’ said whoever it was, and I think it was Robert, ‘and suppose they didn’t go off on the night? Those Prosser kids would have something to snigger about then.’

‘The ones I got are all right,’ Jane said; ‘I know they are, because the man at the shop said they were worth thribble the money—’

‘Of course it isn’t,’ said Cyril; ‘one word can’t be grammar all by itself, so you needn’t be so jolly clever.’

Anthea was rummaging in the corner-drawers of her mind for a very disagreeable answer, when she remembered what a wet day it was, and how the boys had been disappointed of that ride to London and back on the top of the tram, which their mother had promised them as a reward for not having once forgotten, for six whole days, to wipe their boots on the mat when they came home from school.

So Anthea only said, ‘Don’t be so jolly clever yourself, Squirrel. And the fireworks look all right, and you’ll have the eightpence that your tram fares didn’t cost to-day, to buy something more with. You ought to get a perfectly lovely Catharine wheel for eightpence.’

‘I daresay,’ said Cyril, coldly; ‘but it’s not YOUR eightpence anyhow—’

‘But look here,’ said Robert, ‘really now, about the fireworks. We don’t want to be disgraced before those kids next door. They think because they wear red plush on Sundays no one else is any good.’

‘I wouldn’t wear plush if it was ever so—unless it was black to be beheaded in, if I was Mary Queen of Scots,’ said Anthea, with scorn.

Robert stuck steadily to his point. One great point about Robert is the steadiness with which he can stick.

‘I think we ought to test them,’ he said.

‘You young duffer,’ said Cyril, ‘fireworks are like postage-stamps. You can only use them once.’

‘What do you suppose it means by “Carter’s tested seeds” in the advertisement?’

There was a blank silence. Then Cyril touched his forehead with his finger and shook his head.

‘A little wrong here,’ he said. ‘I was always afraid of that with poor Robert. All that cleverness, you know, and being top in algebra so often—it’s bound to tell—’

‘Dry up,’ said Robert, fiercely. ‘Don’t you see? You can’t TEST seeds if you do them ALL. You just take a few here and there, and if those grow you can feel pretty sure the others will be—what do you call it?—Father told me—“up to sample”. Don’t you think we ought to sample the fire-works? Just shut our eyes and each draw one out, and then try them.’

‘And Queen Anne is dead,’ rejoined Robert. No one was in a very good temper. ‘We needn’t go out to do them; we can just move back the table, and let them off on the old tea-tray we play toboggans with. I don’t know what YOU think, but I think it’s time we did something, and that would be really useful; because then we shouldn’t just HOPE the fireworks would make those Prossers sit up—we should KNOW.’

‘It WOULD be something to do,’ Cyril owned with languid approval.

So the table was moved back. And then the hole in the carpet, that had been near the window till the carpet was turned round, showed most awfully. But Anthea stole out on tip-toe, and got the tray when cook wasn’t looking, and brought it in and put it over the hole.

Then all the fireworks were put on the table, and each of the four children shut its eyes very tight and put out its hand and grasped something. Robert took a cracker, Cyril and Anthea had Roman candles; but Jane’s fat paw closed on the gem of the whole collection, the Jack-in-the-box that had cost two shillings, and one at least of the party—I will not say which, because it was sorry afterwards—declared that Jane had done it on purpose. Nobody was pleased. For the worst of it was that these four children, with a very proper dislike of anything even faintly bordering on the sneakish, had a law, unalterable as those of the Medes and Persians, that one had to stand by the results of a toss-up, or a drawing of lots, or any other appeal to chance, however much one might happen to dislike the way things were turning out.

‘You know jolly well you can’t,’ said Cyril, bitterly. ‘It’s settled. It’s Medium and Persian. You’ve done it, and you’ll have to stand by it—and us too, worse luck. Never mind. YOU’LL have your pocket-money before the Fifth. Anyway, we’ll have the Jack-in-the-box LAST, and get the most out of it we can.’

So the cracker and the Roman candles were lighted, and they were all that could be expected for the money; but when it came to the Jack-in-the-box it simply sat in the tray and laughed at them, as Cyril said. They tried to light it with paper and they tried to light it with matches; they tried to light it with Vesuvian fusees from the pocket of father’s second-best overcoat that was hanging in the hall. And then Anthea slipped away to the cupboard under the stairs where the brooms and dustpans were kept, and the rosiny fire-lighters that smell so nice and like the woods where pine-trees grow, and the old newspapers and the bees-wax and turpentine, and the horrid an stiff dark rags that are used for cleaning brass and furniture, and the paraffin for the lamps. She came back with a little pot that had once cost sevenpence-halfpenny when it was full of red-currant jelly; but the jelly had been all eaten long ago, and now Anthea had filled the jar with paraffin. She came in, and she threw the paraffin over the tray just at the moment when Cyril was trying with the twenty-third match to light the Jack-in-the-box. The Jack-in-the-box did not catch fire any more than usual, but the paraffin acted quite differently, and in an instant a hot flash of flame leapt up and burnt off Cyril’s eyelashes, and scorched the faces of all four before they could spring back. They backed, in four instantaneous bounds, as far as they could, which was to the wall, and the pillar of fire reached from floor to ceiling.

‘My hat,’ said Cyril, with emotion, ‘You’ve done it this time, Anthea.’

The flame was spreading out under the ceiling like the rose of fire in Mr Rider Haggard’s exciting story about Allan Quatermain. Robert and Cyril saw that no time was to be lost. They turned up the edges of the carpet, and kicked them over the tray. This cut off the column of fire, and it disappeared and there was nothing left but smoke and a dreadful smell of lamps that have been turned too low.

All hands now rushed to the rescue, and the paraffin fire was only a bundle of trampled carpet, when suddenly a sharp crack beneath their feet made the amateur firemen start back. Another crack—the carpet moved as if it had had a cat wrapped in it; the Jack-in-the-box had at last allowed itself to be lighted, and it was going off with desperate violence inside the carpet.

Robert, with the air of one doing the only possible thing, rushed to the window and opened it. Anthea screamed, Jane burst into tears, and Cyril turned the table wrong way up on top of the carpet heap. But the firework went on, banging and bursting and spluttering even underneath the table.

Next moment mother rushed in, attracted by the howls of Anthea, and in a few moments the firework desisted and there was a dead silence, and the children stood looking at each other’s black faces, and, out of the corners of their eyes, at mother’s white one.