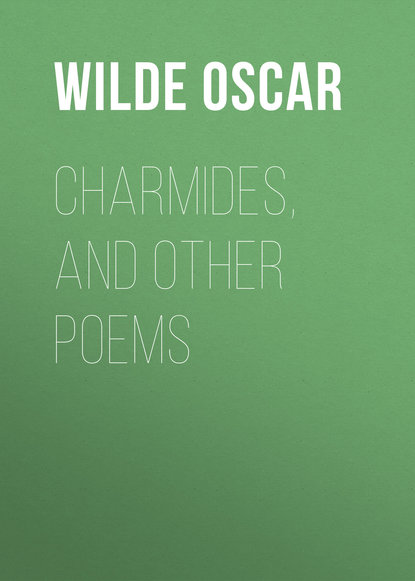 Оскар Уайльд
Charmides, and Other Poems

Charmides, and Other Poems
Oscar Wilde

Charmides, and Other Poems

A further selection of the poems, including The Ballad of Reading Gaol, is published uniform with this volume.

He was a Grecian lad, who coming home
With pulpy figs and wine from Sicily
Stood at his galley’s prow, and let the foam
Blow through his crisp brown curls unconsciously,
And holding wave and wind in boy’s despite
Peered from his dripping seat across the wet and stormy night.

Till with the dawn he saw a burnished spear
Like a thin thread of gold against the sky,
And hoisted sail, and strained the creaking gear,
And bade the pilot head her lustily
Against the nor’west gale, and all day long
Held on his way, and marked the rowers’ time with measured song.

And when the faint Corinthian hills were red
Dropped anchor in a little sandy bay,
And with fresh boughs of olive crowned his head,
And brushed from cheek and throat the hoary spray,
And washed his limbs with oil, and from the hold
Brought out his linen tunic and his sandals brazen-soled,

And a rich robe stained with the fishers’ juice
Which of some swarthy trader he had bought
Upon the sunny quay at Syracuse,
And was with Tyrian broideries inwrought,
And by the questioning merchants made his way
Up through the soft and silver woods, and when the labouring day

Had spun its tangled web of crimson cloud,
Clomb the high hill, and with swift silent feet
Crept to the fane unnoticed by the crowd
Of busy priests, and from some dark retreat
Watched the young swains his frolic playmates bring
The firstling of their little flock, and the shy shepherd fling

The crackling salt upon the flame, or hang
His studded crook against the temple wall
To Her who keeps away the ravenous fang
Of the base wolf from homestead and from stall;
And then the clear-voiced maidens ’gan to sing,
And to the altar each man brought some goodly offering,

A beechen cup brimming with milky foam,
A fair cloth wrought with cunning imagery
Of hounds in chase, a waxen honey-comb
Dripping with oozy gold which scarce the bee
Had ceased from building, a black skin of oil
Meet for the wrestlers, a great boar the fierce and white-tusked spoil

Stolen from Artemis that jealous maid
To please Athena, and the dappled hide
Of a tall stag who in some mountain glade
Had met the shaft; and then the herald cried,
And from the pillared precinct one by one
Went the glad Greeks well pleased that they their simple vows had done.

And the old priest put out the waning fires
Save that one lamp whose restless ruby glowed
For ever in the cell, and the shrill lyres
Came fainter on the wind, as down the road
In joyous dance these country folk did pass,
And with stout hands the warder closed the gates of polished brass.

Long time he lay and hardly dared to breathe,
And heard the cadenced drip of spilt-out wine,
And the rose-petals falling from the wreath
As the night breezes wandered through the shrine,
And seemed to be in some entrancèd swoon
Till through the open roof above the full and brimming moon

Flooded with sheeny waves the marble floor,
When from his nook up leapt the venturous lad,
And flinging wide the cedar-carven door
Beheld an awful image saffron-clad
And armed for battle! the gaunt Griffin glared
From the huge helm, and the long lance of wreck and ruin flared

Like a red rod of flame, stony and steeled
The Gorgon’s head its leaden eyeballs rolled,
And writhed its snaky horrors through the shield,
And gaped aghast with bloodless lips and cold
In passion impotent, while with blind gaze
The blinking owl between the feet hooted in shrill amaze.

The lonely fisher as he trimmed his lamp