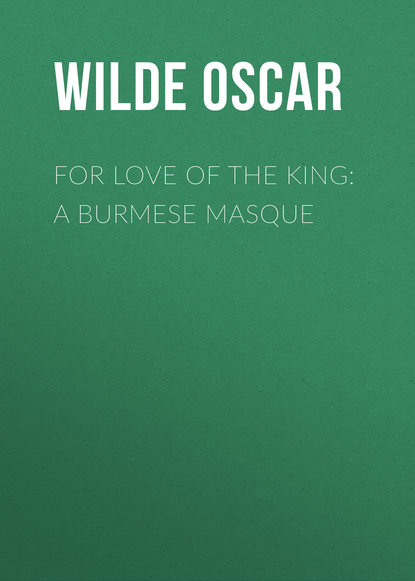 Оскар Уайльд
For Love of the King: A Burmese Masque

For Love of the King: A Burmese Masque
Oscar Wilde

For Love of the King: A Burmese Masque

The very interesting and richly coloured masque or pantomimic play which is here printed in book form for the first time, was invented sometime in 1894 or possibly a little earlier. It was written, not for publication, but as a personal gift to the author’s friend and friend of his family, Mrs. Chan Toon, and was sent to her with the letter that follows and explains its origin.

Mrs. Chan Toon, before her marriage to Mr. Chan Toon, a Burmese gentleman, nephew of the King of Burma and a barrister of the Middle Temple, was Miss Mabel Cosgrove, the daughter of Mr. Ernest Cosgrove of Lancaster Gate, a friend of Sir William and Lady Wilde, and herself brought up with Oscar and his brother Willie.

For a long while Mrs. Chan Toon, who after her husband’s death became Mrs. Woodhouse-Pearse, refused to permit the masque to be printed. The late Robert Ross much wanted to include it in an edition of Wilde’s works, of which it now forms a part, but he could not obtain its owner’s consent. An arrangement, however, having been completed, the play is now made public.

I am greatly repentant being so long in acknowledging receipt of “Told on the Pagoda.” I enjoyed reading the stories, and much admired their quaint and delicate charm. Burmah calls to me.

Under another cover I am sending you a fairy play entitled “For Love of the King,” just for your own amusement. It is the outcome of long and luminous talks with your distinguished husband in the Temple and on the river, in the days when I was meditating writing a novel as beautiful and as intricate as a Persian praying-rug. I hope that I have caught the atmosphere.

I should like to see it acted in your Garden House on some night when the sky is a sheet of violet and the stars like women’s eyes. Alas, it is not likely.

I am in the throes of a new comedy. I met a perfectly wonderful person the other day who unconsciously has irradiated my present with sinuous suggestion: a Swedish Baron, French in manner, Athenian in mind, and Oriental in morals. His society is a series of revelations..

I was at Oakley Street on Thursday; my mother tells me she sends you a letter nearly every week.

Constance desires to be warmly remembered, while I, who am bathing my brow in the perfume of water-lilies, lay myself at the feet of you and yours.

PRINCIPAL CHARACTERS OF THE PLAY

King Meng Beng (Lord of a Thousand White Elephants, Countless Umbrellas and other attributes of greatness).

Shah Mah Phru (A Girl, half Italian, half Burmese, of dazzling beauty).

Dhammathat (Legal Adviser to the Court).

Two Envoys from the King of Ceylon.

The palace of the king of burmah. The scene is laid in the Hall of a Hundred Doors. In the distance can be seen the moat, the waiting elephants, and the peacocks promenading proudly in the blinding sunshine of late afternoon. The scene discovers king meng beng seated on a raised cushion sewn with rubies, under a canopy supported by four attendants, motionless as bronze figures. By his side is a betel-nut box, glittering with gems. On either side of him, butmuch lower down, are the two ambassadors of the king of ceylon, bearers of the King of Ceylon’s consent to the marriage of his only daughter to Meng Beng in two years’ time, men of grave, majestic mien, clad in flowing robes almost monastic in their white simplicity. They smoke gravely at the invitation of meng beng.

Round about are grouped the courtiers, the poonygees, and the kneeling servants, while in the background wait the dancing girls. Banners, propelled with a measured rhythm, create an agreeable breeze. On a great table of gold stand goblets of gold and heaped-up fruits. Everywhere will be observed the emblems of the Royal Peacock and the Sacred White Elephant. Burmese musical instruments sound an abrupt but charming discord. The poinsettias flower punctuates points of deepestcolour from out of vases fashioned like the lotus. Orchids are everywhere. The indescribable scent of Burmah steals across the footlights. The glow, the colour, the sun-swept vista sweeps across the senses. the king claps his hands. The dancing girls, at the signal, advance. They are clad in dresses made of fish scales, which are fastened with diamonds and pale emeralds, to imitate the upthrown spray on the crest of a wave. The dance concluded, the cingalese ambassadors rise and prepare to take ceremonious leave of the king, who hands to them, through his vizier, his message to His Majesty of Ceylon, inscribed on palm leaves and enclosed in a bejewelled casket.

the king expresses a desire for restbefore starting by the Moon of Taboung[1 - One of the greatest feasts of the Buddhist year.]for the Pagoda of Golden Flowers.

Exit meng beng (C.), an alcove of satin hangings which commands a view of the great hall.

The Crowd break up into groups. u. rai gyan thoo and moung pho mhin converse on the tendency of the King to interference in affairs of State; his extreme youth and delicacy of temperament; the pity that the marriage is to be so long delayed; the necessity to find him some distraction in the meantime