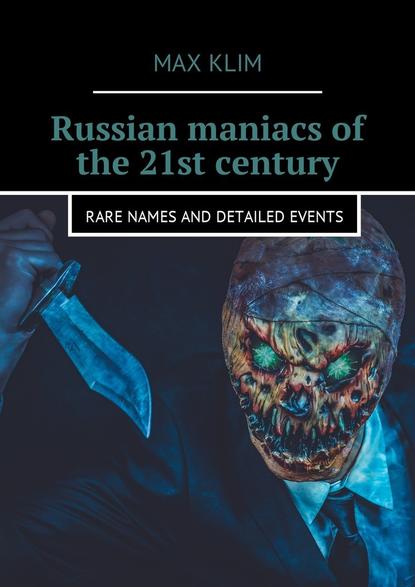 10 chilling stories about Russian serial killers who have been on the territory of Russia since 2000. Cannibals and sexual maniacs, sane and insane. Famous maniacs from such cities as Lipetsk, Novosibirsk, Moscow, Krasnodar, Berdsk, Rossosh, Barnaul, Chelyabinsk, St. Petersburg…

Russian maniacs of the 21st century

10 chilling stories about Russian serial killers who have been on the territory of Russia since 2000.

Natalia and Dmitry Bashkeev, residents of Krasnodar, are accused of murdering one of the residents of this city. According to unconfirmed rumors, the Bashkirs are accused of cannibalism and a series of brutal murders. At present, the Investigative Committee is checking on the involvement of this couple in similar offenses committed in the Krasnodar Territory.

D. Bashkeev was born in 1982, his wife was born in 1975. Natalia some time worked in the sanitary part of the Krasnodar Aircraft Pilots VVAU. A.K. Serova senior medical sister, however, she was fired, because she had chronic problems with alcohol. D. Bashkeev was previously convicted of car theft and robbery, but at the time when the brutal murders were committed, his previous convictions were considered extinguished. Dmitry moonlighted as a handyman, a universal master, and was engaged in the repair of apartments. Since 2012, the couple lived together in a dorm room at the school, the rest of Natalia from her ex-husband. The life of the Bashkir people was asocial.

The fact that the criminals are caught is a pure accident:

road workers accidentally found a mobile phone, lost by Dmitry, where there were photos of the Bashkirs with parts of human bodies. In the photos the man posed with a human hand in his teeth. Workers who found the phone immediately went to the police. At the first interrogation Dmitry denied everything, said that he had found the remains of bodies in the bushes.

However, later he confessed to the crimes committed. As it was possible to establish operatives, the victim of the Bashkeev family was Elena Vakhrusheva, born 05.03.1982, a resident of Krasnodar, a native of Omutninsk. The murder was committed on 08.09 because of the conflict that arose at the time of drinking alcohol together. Between the women a quarrel broke out, the cause of which was jealousy. Natalia not only instigated Dmitry to kill the drinking buddy, but she also actively participated in this murder.

Elena died of numerous stab wounds. Then the murderers dismembered the body of the victim, some of the remains were thrown out in the area around the house, and some were hidden in their room.

As a result of search and other operational and investigative measures, frozen pieces of meat were found in the room of Dmitry and Natalya Bakshyevs, the origin of which is set, the remains of food and parts of bodies, probably human, stored in a steep solution of salt. All this was sent to the laboratory for examination. On the house territory and in the basement of the hostel building, parts of the body of Elena Vakhrusheva, who was identified, were found and seized. These remains are also sent to the experts. Initially, a criminal case against the Bashkirs was initiated under Part 1 of Art. 105 of the Criminal Code of the Russian Federation (murder), but later the couple were charged with a slightly different charge of murder committed by a group of persons by prior conspiracy (in part 2 of Article 105).

The criminal case was transferred to the 1st department, which deals with especially important cases. Vadim Bugaenko, head of the SS SK of Russia in the Krasnodar Territory, told the press on September 28 that all fragments found in the room of cannibals belong to only one person. The photos from Dmitri Bashkeev’s phone, which appeared on the network, gave rise to incredible and horrific rumors about a family of maniacs and serial killers, cannibals who traded in Krasnodar. On this fact, a procedural audit was appointed and conducted.

This story quickly supplemented with incredible rumors. It was said that the Baksheyevs began to live together and to hunt the inhabitants of the city in the distant 1999. The cannibals were euthanized, then killed. From the meat of the people, the Baksheyevs cooked various dishes, what was left was preserved. According to the initial data, Natalia seemed to be selling some canned food in the school, probably with a human. Later, some media wrote that the Baksheevs were suppliers of such canned food to other catering establishments in the Krasnodar Territory. Edge leadership such gossip was categorically rejected. More media reported on the recognition of Dmitry Baksheev in the murder, which the man committed in 2012. And Natalia, according to media reports, allegedly openly confessed to the commission of 30 murders. But representatives of the UK several times made statements that they do not have any information about the murders that were committed cannibalism.

According to the statements of the UK in the Baksheev case, there is only one episode of the first perfect murder. However, rumors about a family of cannibals give more and more details. So, there was information about nineteen scraps of human skin, allegedly found during the search of the Baksheevs’ house, as well as about the remains of at least 7 bodies, canned food with human meat, photos of horrible dishes, for example, from women’s breasts, and even cooking recipes for human meat.

The unknown murderer, who committed seven crimes in 1998—2000 in Barnaul, received the nickname «Barnaul maniac». His victims were young girls, but the motive of the maniac, as well as his personality, could not be established. A man suspected of this series of brutal murders, scores with life during the investigation.

In 1998 and in 1999, two entrants of the Astrakhan State University disappeared. Those. University (ASTU). Subsequently, the body of one of the girls found in a small tributary of the river. Ob, and the second corpse in the forest. When combing one of the forest belts of the Kalmansky district, bones were found. As forensic experts found out, the bones of the skeleton belonged to a young woman who was killed in 1997. According to investigators, a likely killer could be a man, about 40—45 years old, tall (175—180 cm), medium, not dense, with the right features, in general, a pleasant face.

The hair of a likely criminal was short, dark-brown, a haircut under the hedgehog. Based on this information, it was possible to obtain an approximate portrait of the suspect. In 2000, in the summer, five girls disappeared without trace in the city of Barnaul, who were going to enter ASTU. After the search activities, the remains of all the victims were found in the forest belt in the same Kalman district.

Already in September, police officers detained Alexander Anisimov, a merchant in the market. He was suspected of committing all these crimes. Alexander was identified by witnesses and confessed everything. But during the investigation, Alexander Anisimov jumped out of the window. The case remained uncovered, but there have been no disappearances of girls-entrants since then. On possible involvement in these crimes in 2001, police officers checked another criminal, killer maniac, A. Pavlenko.

Russian, was recognized by the Regional Court of Chelyabinsk as guilty of rape and murder of six women, and was sent to a long medication. All crimes are committed on a sexual basis.

VV was born. Yaikov in the Kirghiz SSR. Doctors diagnosed «oligophrenia» when Yaikov was still a child. In 2000, an attempt was made to bring Vyacheslav to responsibility for the distribution and smuggling of narcotic drugs, but because of a disability due to a mental diagnosis, Yaikov was released and sent for compulsory treatment. After he was discharged, Yaikov managed to get a job as a handyman. And already in October 2002 Yaikov strangled a woman near the gas station. Six months later, on May 1, 2003, she was killed by a girl in the GSK. Already in less than three weeks, the maniac committed a new crime. As the court subsequently established. Med experts, all three victims in death were in a state of strong intoxication. Later it was possible to establish that one of the women herself agreed to drink alcohol, not suspecting that her drinking companion would be her killer.