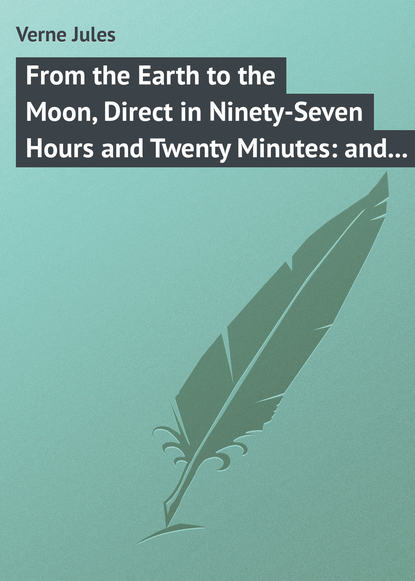 Жюль Габриэль Верн
From the Earth to the Moon, Direct in Ninety-Seven Hours and Twenty Minutes: and a Trip Round It

From the Earth to the Moon, Direct in Ninety-Seven Hours and Twenty Minutes: and a Trip Round It
Jules Verne

From the Earth to the Moon, Direct in Ninety-Seven Hours and Twenty Minutes: and a Trip Round It

FROM THE EARTH TO THE MOON

During the War of the Rebellion, a new and influential club was established in the city of Baltimore in the State of Maryland. It is well known with what energy the taste for military matters became developed amongst that nation of ship-owners, shopkeepers, and mechanics. Simple tradesmen jumped their counters to become extemporized captains, colonels, and generals, without having ever passed the School of Instruction at West Point: nevertheless, they quickly rivalled their compeers of the old continent, and, like them, carried off victories by dint of lavish expenditure in ammunition, money, and men.

But the point in which the Americans singularly distanced the Europeans was in the science of gunnery. Not, indeed, that their weapons retained a higher degree of perfection than theirs, but that they exhibited unheard-of dimensions, and consequently attained hitherto unheard-of ranges. In point of grazing, plunging, oblique, or enfilading, or point-blank firing, the English, French, and Prussians have nothing to learn; but their cannon, howitzers, and mortars are mere pocket-pistols compared with the formidable engines of the American artillery.

This fact need surprise no one. The Yankees, the first mechanicians in the world, are engineers – just as the Italians are musicians and the Germans metaphysicians – by right of birth. Nothing is more natural, therefore, than to perceive them applying their audacious ingenuity to the science of gunnery. Witness the marvels of Parrott, Dahlgren, and Rodman. The Armstrong, Palliser, and Beaulieu guns were compelled to bow before their transatlantic rivals.

Now when an American has an idea, he directly seeks a second American to share it. If there be three, they elect a president and two secretaries. Given four, they name a keeper of records, and the office is ready for work; five, they convene a general meeting, and the club is fully constituted. So things were managed in Baltimore. The inventor of a new cannon associated himself with the caster and the borer. Thus was formed the nucleus of the "Gun Club." In a single month after its formation it numbered 1833 effective members and 30,565 corresponding members.

One condition was imposed as a sine qua non upon every candidate for admission into the association, and that was the condition of having designed, or (more or less) perfected a cannon; or, in default of a cannon, at least a firearm of some description. It may, however, be mentioned that mere inventions of revolvers, five-shooting carbines, and similar small arms, met with but little consideration. Artillerists always commanded the chief place of favour.

The estimation in which these gentlemen were held, according to one of the most scientific exponents of the Gun Club, was "proportional to the masses of their guns, and in the direct ratio of the square of the distances attained by their projectiles."

The Gun Club once founded, it is easy to conceive the result of the inventive genius of the Americans. Their military weapons attained colossal proportions, and their projectiles, exceeding the prescribed limits, unfortunately occasionally cut in two some unoffending pedestrians. These inventions, in fact, left far in the rear the timid instruments of European artillery.

It is but fair to add that these Yankees, brave as they have ever proved themselves to be, did not confine themselves to theories and formulæ, but that they paid heavily, in propriâ personâ, for their inventions. Amongst them were to be counted officers of all ranks, from lieutenants to generals; military men of every age, from those who were just making their début in the profession of arms up to those who had grown old on the gun-carriage. Many had found their rest on the field of battle whose names figured in the "Book of Honour" of the Gun Club; and of those who made good their return the greater proportion bore the marks of their indisputable valour. Crutches, wooden legs, artificial arms, steel hooks, caoutchouc jaws, silver craniums, platinum noses, were all to be found in the collection; and it was calculated by the great statistician Pitcairn that throughout the Gun Club there was not quite one arm between four persons and exactly two legs between six.

Nevertheless, these valiant artillerists took no particular account of these little facts, and felt justly proud when the despatches of a battle returned the number of victims at tenfold the quantity of the projectiles expended.

One day, however – sad and melancholy day! – peace was signed between the survivors of the war; the thunder of the guns gradually ceased, the mortars were silent, the howitzers were muzzled for an indefinite period, the cannon, with muzzles depressed, were returned into the arsenal, the shot were repiled, all bloody reminiscences were effaced; the cotton-plants grew luxuriantly in the well-manured fields, all mourning garments were laid aside, together with grief; and the Gun Club was relegated to profound inactivity.

Some few of the more advanced and inveterate theorists set themselves again to work upon calculations regarding the laws of projectiles. They reverted invariably to gigantic shells and howitzers of unparalleled calibre. Still, in default of practical experience what was the value of mere theories? Consequently, the club-rooms became deserted, the servants dozed in the antechambers, the newspapers grew mouldy on the tables, sounds of snoring came from dark corners, and the members of the Gun Club, erstwhile so noisy in their seances, were reduced to silence by this disastrous peace and gave themselves up wholly to dreams of a Platonic kind of artillery.

"This is horrible!" said Tom Hunter one evening, while rapidly carbonizing his wooden legs in the fireplace of the smoking-room; "nothing to do! nothing to look forward to! what a loathsome existence! When again shall the guns arouse us in the morning with their delightful reports?"

"Those days are gone by," said jolly Bilsby, trying to extend his missing arms. "It was delightful once upon a time! One invented a gun, and hardly was it cast, when one hastened to try it in the face of the enemy! Then one returned to camp with a word of encouragement from Sherman or a friendly shake of the hand from M'Clellan. But now the generals are gone back to their counters; and in place of projectiles, they despatch bales of cotton. By Jove, the future of gunnery in America is lost!"

"Ay! and no war in prospect!" continued the famous James T. Maston, scratching with his steel hook his gutta-percha cranium. "Not a cloud in the horizon! and that too at such a critical period in the progress of the science of artillery! Yes, gentlemen! I who address you have myself this very morning perfected a model (plan, section, elevation, &c.) of a mortar destined to change all the conditions of warfare!"

"No! is it possible?" replied Tom Hunter, his thoughts reverting involuntarily to a former invention of the Hon. J. T. Maston, by which, at its first trial, he had succeeded in killing three hundred and thirty-seven people.

"Fact!" replied he. "Still, what is the use of so many studies worked out, so many difficulties vanquished? It's mere waste of time! The New World seems to have made up its mind to live in peace; and our bellicose Tribune predicts some approaching catastrophes arising out of this scandalous increase of population."

"Nevertheless," replied Colonel Blomsberry, "they are always struggling in Europe to maintain the principle of nationalities."

"Well, there might be some field for enterprise down there; and if they would accept our services – "

"What are you dreaming of?" screamed Bilsby; "work at gunnery for the benefit of foreigners?"

"That would be better than doing nothing here," returned the colonel.

"Quite so," said J. T. Maston; "but still we need not dream of that expedient."

"And why not?" demanded the colonel.

"Ridiculous!" replied Tom Hunter, whittling with his bowie-knife the arms of his easy-chair; "but if that be the case there, all that is left for us is to plant tobacco and distil whale-oil."

"What!" roared J. T. Maston, "shall we not employ these remaining years of our life in perfecting fire-arms? Shall there never be a fresh opportunity of trying the ranges of projectiles? Shall the air never again be lighted with the glare of our guns? No international difficulty ever arise to enable us to declare war against some transatlantic power? Shall not the French sink one of our steamers, or the English, in defiance of the rights of nations, hang a few of our countrymen?"

"No such luck," replied Colonel Blomsberry; "nothing of the kind is likely to happen; and even if it did, we should not profit by it. American susceptibility is fast declining, and we are all going to the dogs."

"It is too true," replied J. T. Maston, with fresh violence; "there are a thousand grounds for fighting, and yet we don't fight. We save up our arms and legs for the benefit of nations who don't know what to do with them! But stop – without going out of one's way to find a cause for war – did not North America once belong to the English?"

"Well then," replied J. T. Maston, "why should not England in her turn belong to the Americans?"

"It would be but just and fair," returned Colonel Blomsberry.

"Go and propose it to the President of the United States," cried J. T. Maston, "and see how he will receive you."

"Bah!" growled Bilsby between the four teeth which the war had left him; "that will never do!"

"Nor on ours," replied unanimously all the bellicose invalids.

"Meanwhile," replied J. T. M., "allow me to say that, if I cannot get an opportunity to try my new mortars on a real field of battle, I shall say good-bye to the members of the Gun Club, and go and bury myself in the prairies of Arkansas!"

"In that case we will accompany you," cried the others.

Matters were in this unfortunate condition, and the club was threatened with approaching dissolution, when an unexpected circumstance occurred to prevent so deplorable a catastrophe.

On the morrow after this conversation every member of the association received a sealed circular couched in the following terms: —

"The President of the Gun Club has the honour to inform his colleagues that, at the meeting of the 5th instant, he will bring before them a communication of an extremely interesting nature. He requests, therefore, that they will make it convenient to attend in accordance with the present invitation. – Very cordially,