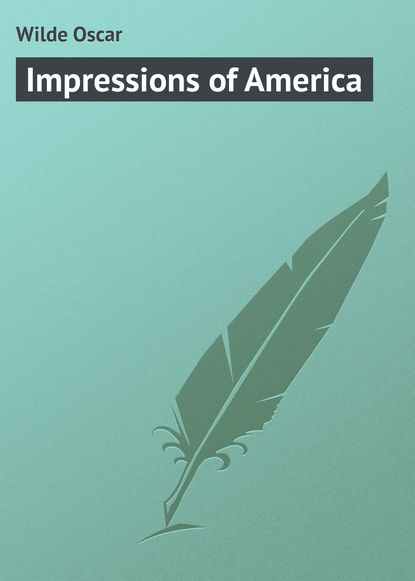 
During his tour in America Wilde “happened to find” himself (as he has himself described it), in Louisville, Kentucky. The subject he had selected to speak on was the Mission of Art in the Nineteenth Century. In the course of his lecture he had occasion to quote Keats’ Sonnet on Blue “as an example of the poet’s delicate sense of colour-harmonies.” After the lecture there came round to see him “a lady of middle age, with a sweet gentle manner and most musical voice,” who introduced herself as Mrs. Speed, the daughter of George Keats, and she invited the lecturer to come and examine the Keats manuscripts in her possession.

Some months afterwards when lecturing in California he received a letter from this lady asking him to accept the original manuscript of the sonnet which he had quoted.

Mention must be made of Wilde’s first play, a drama in blank verse entitled “Vera, or the Nihilists.” It had been arranged that, before his departure for America, this play should be performed at the Adelphi Theatre, London, with Mrs. Bernard Beere as the heroine, on Saturday, December 17th, 1881, but a few weeks before the date fixed for the first performance, the author decided to postpone the production “owing to the state of political feeling in England.”

On his return to England in 1883 Wilde started on a lecturing tour, the first being to the Art Students of the Royal Academy at their Club in Golden Square on June 30th. Ten days later he spoke at Prince’s Hall on his “Personal Impressions of America,” and on subsequent occasions at Margate, Ramsgate and Southampton. On Monday, July 30th he lectured at Southport and on the following Thursday he went to Liverpool to welcome Mrs. Langtry on her return from America, and the same afternoon he left on his second visit to the States in order to superintend the rehearsals of “Vera,” which it had been arranged to produce at the Union Square Theatre, New York, on August 20th following. The piece was not a success – it was, indeed, the only failure Wilde had. However, his next play, which he called his “Opus Secundum,” also a blank verse tragedy, had a successful run in America in 1891. This was “The Duchess of Padua,” played by Lawrence Barrett, under the title of “Guido Ferranti.” This has not been seen in England, nor is it even possible for Wilde’s admirers to read this early offspring of his pen, for only twenty copies were printed for acting purposes in America and of these but one is known to be in existence, in this country at least.