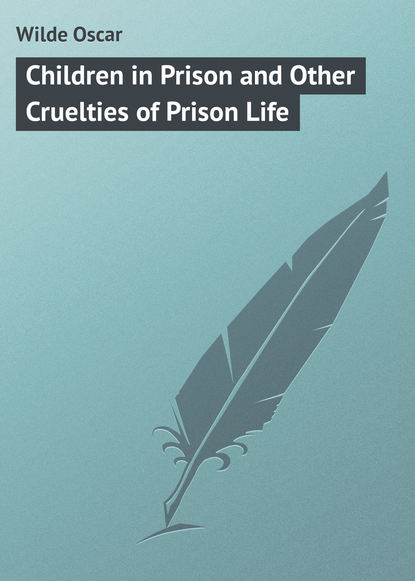 Оскар Уайльд
Children in Prison and Other Cruelties of Prison Life

Children in Prison and Other Cruelties of Prison Life
Oscar Wilde

Children in Prison and Other Cruelties of Prison Life

The circumstance which called forth this letter is a woeful one for Christian England. Martin, the Reading warder, is found guilty of feeding the hungry, nursing the sick, of being kindly and humane. These are his offences in plain unofficial language.

This pamphlet is tendered to earnest persons as evidence that the prison system is opposed to all that is kind and helpful. Herein is shown a process that is dehumanizing, not only to the prisoners, but to every one connected with it.

Martin was dismissed. It happened in May last year. He is still out of employment and in poor circumstances. Can anyone help him?

SOME CRUELTIES OF PRISON LIFE

THE EDITOR OF THE DAILY CHRONICLE

Sir, – I learn with great regret, through an extract from the columns of your paper, that the warder Martin, of Reading Prison, has been dismissed by the Prison Commissioners for having given some sweet biscuits to a little hungry child. I saw the three children myself on the Monday preceding my release. They had just been convicted, and were standing in a row in the central hall in their prison dress, carrying their sheets under the arms previous to their being sent to the cells allotted to them. I happened to be passing along one of the galleries on my way to the reception room, where I was to have an interview with a friend. They were quite small children, the youngest – the one to whom the warder gave the biscuits – being a tiny little chap, for whom they had evidently been unable to find clothes small enough to fit. I had, of course, seen many children in prison during the two years during which I was myself confined. Wandsworth Prison, especially, contained always a large number of children. But the little child I saw on the afternoon of Monday, the 17th, at Reading, was tinier than any one of them. I need not say how utterly distressed I was to see these children at Reading, for I knew the treatment in store for them. The cruelty that is practised by day and night on children in English prisons is incredible, except to those who have witnessed it and are aware of the brutality of the system.

People nowadays do not understand what cruelty is. They regard it as a sort of terrible mediæval passion, and connect it with the race of men like Eccelin da Romano, and others, to whom the deliberate infliction of pain gave a real madness of pleasure. But men of the stamp of Eccelin are merely abnormal types of perverted individualism. Ordinary cruelty is simply stupidity. It comes from the entire want of imagination. It is the result in our days of stereotyped systems, of hard-and-fast rules, of centralisation, of officialism, and of irresponsible authority. Wherever there is centralisation there is stupidity. What is inhuman in modern life is officialism. Authority is as destructive to those who exercise it as it is to those on whom it is exercised. It is the Prison Board, with the system that it carries out, that is the primary source of the cruelty that is exercised on a child in prison. The people who uphold the system have excellent intentions. Those who carry it out are humane in intention also. Responsibility is shifted on to the disciplinary regulations. It is supposed that because a thing is the rule it is right.

The present treatment of children is terrible, primarily from people not understanding the peculiar psychology of a child's nature. A child can understand a punishment inflicted by an individual, such as a parent or guardian, and bear it with a certain amount of acquiescence. What it cannot understand is a punishment inflicted by Society. It cannot realise what Society is. With grown people it is, of course, the reverse. Those of us who are either in prison or have been sent there, can understand, and do understand, what that collective force called Society means, and whatever we may think of its methods or claims, we can force ourselves to accept it. Punishment inflicted on us by an individual, on the other hand, is a thing that no grown person endures or is expected to endure.

The child consequently, being taken away from its parents by people whom it has never seen, and of whom it knows nothing, and finding itself in a lonely and unfamiliar cell, waited on by strange faces, and ordered about and punished by the representatives of a system that it cannot understand, becomes an immediate prey to the first and most prominent emotion produced by modern prison life – the emotion of terror. The terror of a child in prison is quite limitless. I remember once in Reading, as I was going out to exercise, seeing in the dimly-lit cell, right opposite my own, a small boy. Two warders, not unkindly men, were talking to him, with some sternness apparently, or perhaps giving him some useful advice about his conduct. One was in the cell with him, the other was standing outside. The child's face was like a white wedge of sheer terror. There was in his eyes the mute appeal of a hunted animal. The next morning I heard him at breakfast-time crying, and calling to be let out. His cry was for his parents. From time to time I could hear the deep voice of the warder on duty warning him to keep quiet. Yet he was not even convicted of whatever little offence he had been charged with. He was simply on remand. That I knew by his wearing his own clothes, which seemed neat enough. He was, however, wearing prison socks and shoes. This showed that he was a very poor boy, whose own shoes, if he had any, were in a bad state. Justices and magistrates, an entirely ignorant class as a rule, often remand children for a week, and then perhaps remit whatever sentence they are entitled to pass. They call this "not sending a child to prison." It is, of course, a stupid view on their part. To a little child, whether he is in prison on remand or after conviction, is a subtlety of social position he cannot comprehend. To him the horrible thing is to be there at all. In the eyes of humanity it should be a horrible thing for him to be there at all.