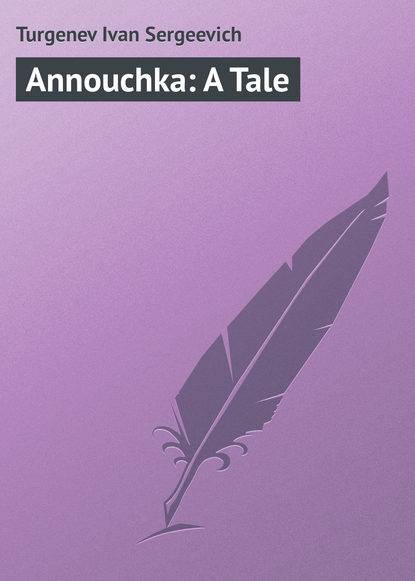 
At the time this superabundance of strange and delicious sensations almost made me laugh; I quickly went to bed, and just as I was closing my eyes I suddenly remembered that I had not thought the whole evening of my faithless one. – What does this mean, I asked myself; is it that I am no longer in love? But that question remained unanswered, and I slept like a child in its cradle.

The next morning, being awake, but not yet up, I heard the sound of a walking-stick echoing under my window, and a voice that I recognized as that of Gaguine, pouring forth the following song: —

I hastened to open the door to him.

"Good-morning," said he, entering, "I disturb you very early, but the weather is so fine. See what a delicious freshness, the dew, the singing of the larks" —

And, indeed, he, with his rosy cheeks, his curly hair, and his half-bare neck, had all the freshness of morning.

I dressed myself; we went into my little garden and took a seat upon a bench; they brought our coffee there, and we began to talk.

Gaguine told of some of his future plans; having a fine fortune and dependent upon no one, he wished to devote himself to painting, and regretted only that he had taken it up so late, he had lost so much valuable time. I in turn confided to him the plans that I had formed, and took advantage of the opportunity to make him the confidant of my unhappy love affair. He listened patiently, but I could see that the sufferings of my heart had but little interest for him. After having listened to my story for politeness' sake, with two or three sighs, he proposed that we should go and see his sketches. I immediately consented. We started. Annouchka was not at home. The landlady informed us that she must be at the ruins. They so called the remains of an old feudal castle, which was situated a mile or so from the town. Gaguine opened all his portfolios. I found that his sketches had much life and truth, something broad and bold; but none were finished, and the drawing appeared to me incorrect and careless.

I frankly expressed my opinion.

"Yes, yes," he replied, sighing, "you are right; all that is bad, and it is not matured by reflection. What am I to do? I have not worked enough; our cursed Slavic indolence always ends in getting the better of me! Whilst the work is still but an idea, like an eagle soaring in the air, we believe ourselves able to move the world; then at the moment of execution come weaknesses, and then – weariness."

I offered him some words of encouragement, but he interrupted me with a wave of the hand, picked up his sketches, and threw them in a heap upon the sofa.

"If perseverance does not fail me, I shall succeed," said he, between his teeth; "otherwise, I shall vegetate as a country squire, never amounting to anything.

"Let us go and look for Annouchka!"

The road that led to the ruins ran along the side of a narrow and wooded dell. At the bottom a rapid stream rushed noisily over the stones, as if in a hurry to lose itself in the great river, which was seen in the distance behind the dark rampart of steep mountains. Gaguine called my attention to several very harmonious effects of color, and his words revealed to me, if not a painter of talent, at least a true artist. The ruin was soon before us. It was at the top of a barren rock, a square tower, entirely blackened, quite intact, but nearly split from top to bottom by a deep crack. Walls covered with moss were attached to the tower. Ivy clung here and there; stunted shrubbery sprang out of grayish embrasures and caved-in vaults; a stony path led to an entrance door standing upright. We were not far from it when a woman's figure appeared suddenly before us, leaped lightly upon a heap of rubbish, and stood erect upon the projection of a wall at the edge of a precipice.

"I am not mistaken!" exclaimed Gaguine; "it is Annouchka. How foolish of her!"

We passed through the door, and found ourselves in a small court almost entirely filled with nettles and wild apple trees. It was, indeed, Annouchka, sitting upon the projection of the wall. She turned her head towards us and began to laugh, not moving from her place; Gaguine shook his finger at her, and raising my voice, I reproached her for her imprudence.

"Be quiet," Gaguine said, in my ear; "let her do it; you have no idea of what she is capable when provoked; she would climb to the top of the tower. Admire rather the industrious spirit of the people of the country."

I turned and saw in a corner a booth of boards, on the floor of which was squatting an old woman knitting stockings, looking at us from under her spectacles. She had for sale beer, cakes, and seltzer water, for the use of tourists.

We seated ourselves upon a bench and began to drink foamy beer from heavy tin goblets. Annouchka still remained seated in the same place, her feet curled under her, her head enveloped in her muslin scarf; her charming profile outlined clearly against the blue sky; but I looked at her with some irritation. I believed the evening before that her manners were affected and unnatural. She wishes to astonish us, I thought; but why? what a childish whim. You would say that she had divined my thought, for, throwing upon me a quick penetrating glance, she began to laugh, descended from the wall in two jumps, then, approaching the old woman, she asked her for a glass of water.

"You think I wish to drink?" she said to her brother; "no, I wish to water the flowers upon the wall yonder that are dying and dried up by the sun."

Gaguine did not reply; she left us, her glass in her hand, and climbed once more upon the ruins. Stopping at intervals she stooped and poured out with a comic gravity some drops of water that sparkled in the sun. Her movements were very graceful; but I still watched her with disapproval, admiring, however, her nimbleness and activity. Coming to a dangerous place she purposely alarmed us by giving a little cry and then began to laugh. That was the finishing stroke to my impatience.

"She is a regular goat," muttered the old woman, who had stopped working.

Having emptied the last drop of water from her glass, Annouchka at length arose to rejoin us, approaching with a defiant manner. A strange smile for a moment contracted her lips and her eyebrows and dilated her nostrils; she half closed her black eyes with a provoking air of mockery.

"You think my conduct unbecoming," her face seemed to say; "no matter, I know that you admire me."

Suddenly the young girl appeared to feel a sense of shame, and lowering her eyes, she came and sat by us like a culprit. For the first time I examined her features closely; and I have rarely seen more mobile ones. A few moments had scarcely elapsed before her face lost all color and took an expression approaching almost to sadness; it even seemed to me that her features assumed grandeur, artlessness. She appeared entirely absorbed.

We explored the ruins minutely. Annouchka kept behind us, and we began to admire the view. When the dinner hour arrived, Gaguine paid the old woman, and asked from her a last jug of beer; then turning to me, he said with a shy smile: —

"To the lady of your thoughts!"

"He has then – you have then a lady of whom you think?" asked Annouchka.

"And who has not?" replied Gaguine.

Annouchka remained thoughtful for some moments, the expression of her face changed again, and a smile of defiance, almost impudent, appeared once more upon her lips.