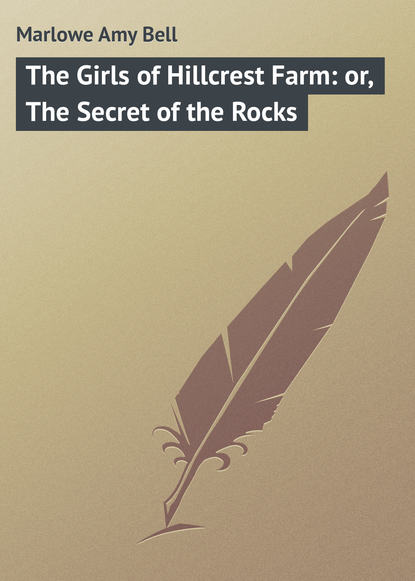 Amy Marlowe
The Girls of Hillcrest Farm: or, The Secret of the Rocks

The Girls of Hillcrest Farm: or, The Secret of the Rocks
Amy Marlowe

The Girls of Hillcrest Farm Or The Secret of the Rocks

Whenever she heard the siren of the ladder-truck, as it swung out of its station on the neighboring street, Lydia Bray ran to the single window of the flat that looked out on Trimble Avenue.

They were four flights up. There were twenty-three other families in this “double-decker.” A fire in the house was the oldest Bray girl’s nightmare by night and haunting spectre by day.

Lydia just couldn’t get used to these quarters, and they had been here now three months. The old, quiet home on the edge of town had been so different. To it she had returned from college so short a time ago to see her mother die and find their affairs in a state of chaos.

For her father was one of those men who leave everything to the capable management of their wives. Euphemia, or “’Phemie,” was only a schoolgirl, then, in her junior year at high school; “Lyddy” was a sophomore at Littleburg when her mother died, and she had never gone back.

She couldn’t. There were two very good reasons why her own and even ’Phemie’s education had to cease abruptly. Their mother’s income, derived from their grandmother’s estate, ceased with her death. They could not live, let alone pursue education “on the heights,” upon Mr. Bray’s wages as overseer in one of the rooms of the hat factory.

“Mother’s hundred dollars a month was just the difference between poverty and comfort,” Lyddy had decided, when she took the strings of the household into her own hands.

“I haven’t that hundred dollars a month; father makes but fifteen dollars weekly; you will have to go to work at something, ’Phemie, and so will I.”

And no longer could they pay twenty-five dollars a month house rent. Lyddy had first placed her sister with a millinery firm at six dollars weekly, and had then found this modest tenement about half-way between her father’s factory and ’Phemie’s millinery shop, so that it would be equally handy for both workers.

As for herself, Lyddy wished to obtain some employment that would occupy only a part of her day, and in this she had been unsuccessful as yet. She religiously bought a paper every morning, and went through the “help wanted” columns, answering every one that looked promising. She had tried many kinds of “work at home for ladies,” and canvassing, and the like. The latter did not pay for shoe-leather, and the “work at home” people were mostly swindlers. Lyddy was no needle-woman, so she could not make anything as a seamstress.

She had promised her mother to keep the family together and make a home for her father. Mr. Bray was not well. For almost two years now the doctor had been warning him to get out of the factory and into some other business. The felt-dust was hurting him.

He had come in but the minute before and had at once gone to lie down, exhausted by his climb up the four flights of stairs. ’Phemie had not yet returned from work, for it was nearing Easter, despite the rawness of the days, and the millinery shop was busy until late. They always waited supper for ’Phemie.

Now, when Lyddy ran to the window at the raucous shriek of the ladder-truck siren, she hoped she would see her sister turning the corner into the avenue, where the electric arc-light threw a great circle of radiance upon the wet walk.

But although there was the usual crowd at the corner, and all seemed to be in a hurry to-night, Lyddy saw nothing of either her sister or the ladder-truck. She went back to the kitchen, satisfied that the fire apparatus had not swung into their street, so the tenement must be safe for the time being.

She finished laying the table for supper. Once she looked up. There was that man at the window again!

That is, he would be a man some day, Lyddy told herself. But she believed, big as he was, he was just a hobbledehoy-boy. He was a boy who, if one looked at him, just had to smile. And he was always working in a white apron and brown straw cuff-shields at that window which was a little above the level of Lyddy’s kitchen window.

Lyddy Bray abominated flirting and such silly practises. And although the boy at the window was really good to look upon–cleanly shaven, rosy-cheeked, with good eyes set wide apart, and a firm, broad chin–Lyddy did not like to see him every time she raised her eyes from her own kitchen tasks.

Often, even on dark days, she drew the shade down so that she should have more privacy. For sometimes the young man looked idly out of the window and Lyddy believed that, had she given him any encouragement, he would have opened his own window and spoken to her.

The place in which he worked was a tall loft building; she believed he was employed in some sort of chemical laboratory. There were retorts, and strange glass and copper instruments in partial view upon his bench.

Now, having lighted the gas, Lyddy stepped to the window to pull down the shade closely and shut the young man out. He was staring with strange eagerness at her–or, at least, in her direction.

He flung up his window just as she reached for the shade. But she saw then that he was looking above her story.

“It’s those Smith girls, I declare,” thought Lyddy. “Aren’t they bold creatures? And–really–I thought he was too nice a boy – ”

That was the girl of it! She was shocked at the thought of having any clandestine acquaintance with the young man opposite; yet it cheapened him dreadfully in Lyddy’s eyes to see him fall prey to the designing girls in the flat above. The Smith girls had flaunted their cheap finery in the faces of Lyddy and ’Phemie Bray ever since the latter had come here to live.

She did not pull the shade down for a moment. That boy certainly was acting in a most outrageous manner!

His body was thrust half-way out of the window as he knelt on his bench among the retorts. She saw several of the delicate glass instruments overturned by his vigorous motions. She saw his lips open and he seemed to be shouting something to those in the window above.

“How rude of him,” thought the disappointed Lyddy. He had looked to be such a nice young man.

Again she would have pulled down the shade, but the boy’s actions stayed her hand.

He leaped back from the window and disappeared–for just a moment. Then he staggered into view, thrust a long and wide plank through his open window, and, bearing down upon it, shoved hard and fast, thrusting the novel bridge up to the sill of the window above Lyddy’s own.

“What under the sun does that fellow mean to do?” gasped the girl, half tempted to raise her own window so as to look up the narrow shaft between the two buildings.

“He never would attempt to cross over to their flat,” thought Lyddy. “That would be quite too–ri–dic–u–lous – ”

The youth was adjusting the plank. At first he could not steady it upon the sill above Lyddy’s kitchen window. And how dangerous it would be if he attempted to “walk the plank.”

And then there was a roaring sound above, a glare of light, a crash of glass and a billow of black smoke suddenly–but only for a moment–filled the space between the two buildings!

The girl almost fell to the floor. She had always been afraid of fire, and it had been ever in her mind since they moved into this big tenement house. And now it had come without her knowing it!

While she thought the young man to be trying to enter into a flirtation with the girls in the flat above, the house was afire! No wonder so many people had seemed running at the corner when she looked out of the front window. The ladder-truck had swung around into the avenue without her seeing it. Doubtless the street in front of the tenement was choked with fire-fighting apparatus.

“Oh, dear me!” gasped Lyddy, reeling for the moment.

Then she dashed for the bedroom where her father lay. Smoke was sifting in from the hall through the cracks about the ill-hung door.

He lay on the bed, as still as though sleeping. But the noise above should have aroused him by this time, had her own shrill cry not done so.

Yet he did not move.

Lyddy leaped to the bedside, seizing her father’s shoulder with desperate clutch. She shook his frail body, and the head wagged from side to side on the pillow in so horrible a way–so lifeless and helpless–that she was smitten with terror.

Was he dead? He had never been like this before, she was positive.

She tore open his waistcoat and shirt and placed her hand upon his heart. It was beating–but, oh, how feebly!

And then she heard the flat door opened with a key–’Phemie’s key. Her sister cried:

“Dear me, Lyddy! the hall is full of smoke. It isn’t your stove that’s smoking so, I hope? And here’s Aunt Jane Hammond come to see us. I met her on the street, and these four flights of stairs have almost killed her – Why! what’s happened, Lyddy?” the younger girl broke off to ask, as her sister’s pale face appeared at the bedroom door.

“Everything–everything’s happened at once, I guess,” replied Lyddy, faintly. “Father’s sick–we’ve got company–and the house is afire!”