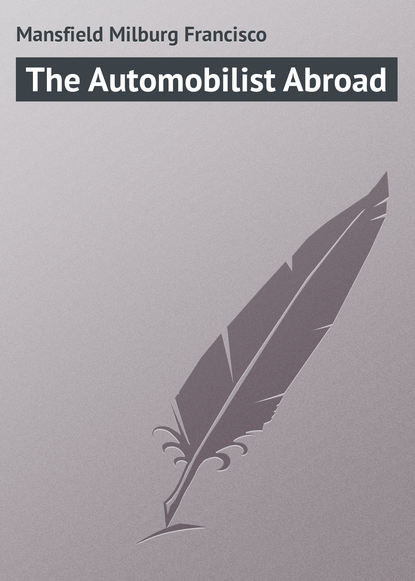 As to the fare offered in English inns, as compared with that of the Continental hotel, the least said the better; the subject has been gone over again and again, so it shall not be reiterated here, save to quote Pierre Loti on what one eats for an English dinner.

"We were assembled round a horrible bill of fare, which would not be good enough for one of our humblest cook-shops. But the English are extraordinary folk. When I saw the reappearance, for the fourth time, of the fatal dish of three compartments, for badly boiled potatoes, for peas looking poisonously green, and for cauliflower drenched with a glue-like substance, I declined, and sighed for Poledor, who nourished my studious youth on a dainty repast at a shilling per day."

The modern tourist, and especially the tourist by automobile, has done more for the improved conduct of the wayside hotel, and even those of the large towns, than whole generations of travellers of a former day.

Once the hotel drew its income from the hiring-out of posting-horses, and the sale of a little food and much wine. As the old saying goes: "Four horses and four bottles of port went together in the account of every gentleman." Travellers of those days, if comparatively few, were presumably wealthy. To-day no one, save the vulgar few, ever cares that the innkeeper, or the servants, should suspect him of being wealthy.

It's a failing of the Anglo-Saxon race, however, to want to be taken for bigger personages than they really are, and often enough they pay for the privilege. This is only natural, seeing that even an innkeeper is human. Charges suitable for a milord or a millionaire have been inflicted on Browns, Joneses, and Robinsons simply because they demanded such treatment – for fear they would not be taken for "gentlemen." Such people are not numerous among real traveling automobilists; they are mostly found among that class who spend the week-end at Brighton, or dine at Versailles or St. Germain or "make the fête" at Trouville. They are known instinctively by all, and are only tolerated by the hotel landlord for the money they spend.

The French cook's "batterie de cuisine" is a thing which is fearfully and wonderfully displayed in all the splendour of polished steel and copper; that is, it is frequently so displayed in the rather limited acquaintance which the general public has with the cuisine of a great hotel or restaurant, whether it be in Paris, London, or New York.

In provincial France it is quite another thing. The chef-patron of a small hotel in a small town may be possessed of an imposing battery of pots and pans, but often, since he buys his pâtisserie and sweetmeats of the local pastry-cook, and since his guests may frequently not number a dozen at a time, he has no immediate use for all of his casseroles and marmites and plats ronds and sauteuses at one time, and accordingly, instead of being picturesquely hung about the wall in all their polished brilliancy, they are frequently covered with a coating of dull wax or, more banal yet, enveloped in an ancient newspaper with only their handles protruding. It's a pity to spoil the romantically picturesque idea which many have of the French batterie de cuisine, but the before-mentioned fact is more often the case than not.

Occasionally, on the tourist-track, there is a "show hotel," like the Hôtel du Grand Cerf at Louviers (its catering in this case is none the worse for its being a "show-place," it may be mentioned) where all the theatrical picturesqueness of the imagination may be seen. There is the timbered sixteenth-century house-front, the heavily beamed, low ceiling of the cuisine, the great open-fire chimney with its broche, and all the brave showing of pots and pans, brilliant with many scrubbings of eau de cuivre, to present quite the ideal picture of its kind to be seen in France – without leaving the highroads and searching out the "real thing" in the byways.

On the other hand, in the same bustling town, is the Mouton d'Argent, equally as excellent in its catering (perhaps more so), where the kitchen is about the most up-to-date thing imaginable, with a modern range, mechanical egg-beaters, etc. This last is nothing very wonderful to an American, but is remarkable in France, where the average cook usually does the work quite as efficiently with a two-tined fork, or something which greatly resembles a chop-stick.

In the cuisine electric lights are everywhere, but the up-to-dateness here stops abruptly; the salle à manger is bare and uninviting, and the rooms above equally so, and the electric light has not penetrated beyond the ground floor. Instead one finds ranged on the mantel, above the cook-stove in the kitchen, a regiment of candlesticks, in strange contrast to the rest of the furnishings. Electric bells, too, are wanting, and there is still found the row of jangling grelots, their numbers half-obliterated, hanging above the great doorway leading to the courtyard.

The European waiter is never possessed of that familiarity of speech with those he serves, which the American negro waiter takes for granted is his birthright. It's all very well to have a cheerful-countenanced waiter bobbing about behind one's chair, indeed it's infinitely more inspiring than such of the old brigade of mutton-chopped English waiters as still linger in some of London's City eating-houses, but the disposition of the coffee-coloured or coal-black negro to talk to you when you do not want to be talked to should be suppressed.

The genuine French, German, or Swiss waiter of hotel, restaurant, or café is neither too cringingly servile, nor too familiar, though always keen and agile, and possessed of a foresight and initiative which anticipates your every want, or at any rate meets it promptly, even if you ask for it in boarding-school French or German.

There is a keen supervision of food products in France, by governmental inspection and control, and one is certain of what he is getting when he buys his filet at the butcher's, and if he patronizes hotels and restaurants of an approved class he is equally sure that he is eating beef in his bouille and mutton in his ragoût.

Horse-meat is sold largely, and perhaps certain substitutes for rabbit, but you only buy horsemeat at a horse butcher's, so there is no deception here. You buy horse-meat as horse-meat, and not as beef, in the same way that you buy oleomargarine as oleomargarine, and not as butter, and the French law deals hardly with the fraudulent seller of either.

The law does not interfere with one's private likes and dislikes, and if you choose to make your breakfast off of oysters and Crême Chantilly – as more than one American has been known to do on the Paris boulevards – there is no law to stop you, as there is in Germany, if you want beer and fruit together. Doubtless this is a good law; it sounds reasonable; but the individual should have sense enough to be able to select a menu from non-antagonistic ingredients.

Foreigners, by which English and Americans mean people of Continental Europe, know vastly more of the art of catering to the traveller than do Anglo-Saxons. This is the first, last, and intermediate verse of the litany of good cheer. We may catch up with our Latin and Teuton brothers, or we may not. Time will tell, if we don't expire from the over-eating of pie and muffins before that time arrives.

The advantages of touring by automobile are many: to see the country, to travel agreeably, to be independent of railways, and to be an opportunist – that is to say to be able to fly off at a tangent of fifty or a hundred kilometres at a moment's notice, in order to take in some fête or fair, or celebration or pilgrimage.

"Le tourisme en automobile" is growing all over the world, but after all it is generally only in or near the great cities and towns that one meets an automobile on the road. They hug the great towns and their neighbouring resorts with astonishing persistency. Of the one thousand automobiles at Nice in the season it is certain that nine-tenths of the number that leave their garages during the day will be found sooner or later on the famous "Corniche," going or coming from Monte Carlo, instead of discovering new tracks for themselves in the charming background of the foot-hills of the Maritime Alps.

In England, too, the case is not so very different. There are a thousand "week-enders" in automobiles on the way to Brighton, Southsea, Bournemouth, Scarborough, or Blackpool to ten genuine tourists, and this even though England and Wales and Scotland form a snug little touring-grounds with roads nearly, if not always, excellent, and with accommodations – of a sort – always close at hand.

In Germany there seems to be more genuine touring, in proportion to the number of automobiles in use, than elsewhere. This may not prove to be wholly the case, as the author judges only from his observations made on well-worn roads.

Switzerland is either all touring, or not at all; it is difficult to decide which. At any rate most of the strangers within its frontiers are tourists, and most of the tourists are strangers, and many of them take their automobiles with them in spite of the "feeling" lately exhibited there against stranger automobilists.

Belgium and Holland, as touring-grounds for automobilists, do not figure to any extent. This is principally from the fact that they are usually, so far as foreign automobilists are concerned, included in more comprehensive itineraries. They might be known more intimately, to the profit of all who pass through them. They are distinctly countries for leisurely travel, for their areas are so restricted that the automobilist who covers two or three hundred kilometres in the day will hardly remember that he has passed through them.

Northern Italy forms very nearly as good a touring-ground as France, and the Italian engineers have so refined the automobile of native make, and have so fostered automobilism, that accommodations are everywhere good, and the tourist to-day will not lack for supplies of benzina and olio as he did a few years ago.

The bulk of the automobile traffic between France and Italy enters through the gateway of the Riviera, and, taken all in all, this is by far the easiest, and perhaps the most picturesque, of routes. Alternatives are through Gap and Cuneo, Briançon and Susa, Moutiers and Aosta, or by the Swiss passes, the latter perhaps the most romantic of routes in spite of their difficulties and other objections.