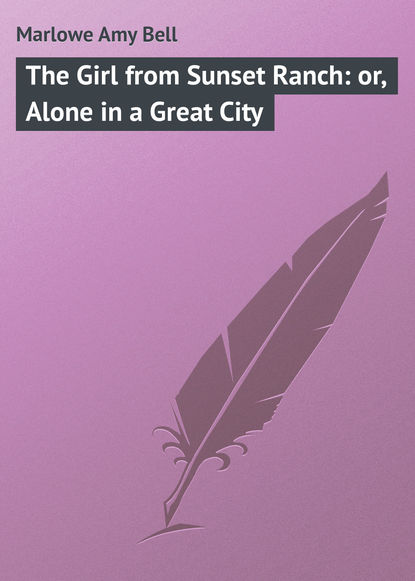 Amy Marlowe
The Girl from Sunset Ranch: or, Alone in a Great City

The Girl from Sunset Ranch: or, Alone in a Great City
Amy Marlowe

The Girl from Sunset Ranch; Or, Alone in a Great City

“SNUGGY” AND THE ROSE PONY

“Hi, Rose! Up, girl! There’s another party making for the View by the far path. Get a move on, Rosie.”

The strawberry roan tossed her cropped mane and her dainty little hoofs clattered more quickly over the rocky path which led up from the far-reaching grazing lands of Sunset Ranch to the summit of the rocky eminence that bounded the valley upon the east.

To the west lay a great, rolling plain, covered with buffalo grass and sage; and dropping down the arc of the sky was the setting sun, ruddy-countenanced, whose almost level rays played full upon the face of the bluff up which the pony climbed so nimbly.

“On, Rosie, girl!” repeated the rider. “Don’t let him get to the View before us. I don’t see why anybody would wish to go there,” she added, with a jealous pang, “for it was father’s favorite outlook. None of our boys, I am sure, would come up here at this hour.”

Helen Morrell was secure in this final opinion. It was but a short month since Prince Morrell had gone down under the hoofs of the steers in an unfortunate stampede that had cost the Sunset Ranch much beside the life of its well-liked owner.

The View – a flat table of rock on the summit overlooking the valley – had become almost sacred in the eyes of the punchers of Sunset Ranch since Mr. Morrell’s death. For it was to that spot the ranchman had betaken himself – usually with his daughter – on almost every fair evening, to overlook the valley and count the roaming herds which grazed under his brand.

Helen, who was sixteen and of sturdy build, could see the nearer herds now dotting the plain. She had her father’s glasses slung over her shoulder, and she had come to-night partly for the purpose of spying out the strays along the watercourses or hiding in the distant coulées.

But mainly her visit to the View was because her father had loved to ride here. She could think about him here undisturbed by the confusion and bustle at the ranch-house. And there were some things – things about her father and the sad conversation they had had together before his taking away – that Helen wanted to speculate upon alone.

The boys had picked him up after the accident and brought him home; and doctors had been brought all the way from Helena to do what they could for him. But Mr. Morrell had suffered many bruises and broken bones, and there had been no hope for him from the first.

He was not, however, always unconscious. He was a masterful man and he refused to take drugs to deaden the pain.

And yet, there was one thing of which he had been sorely afraid. It was the thought of leaving his daughter alone.

“Oh, Snuggy!” he groaned, clinging to the girl’s plump hand with his own weak one. “If there were some of your own kind to – to leave you with. A girl like you needs women about – good women, and refined women. Squaws, and Greasers, and half-breeds aren’t the kind of women-folk your mother was brought up among.

“I don’t know but I’ve done wrong these past few years – since your mother died, anyway. I’ve been making money here, and it’s all for you, Snuggy. That’s fixed by the lawyer in Elberon.

“Big Hen Billings is executor and guardian of you and the ranch. I know I can trust him. But there ought to be nice women and girls for you to live with – like those girls who went to school with you the four years you were in Denver.

“Yet, this is your home. And your money is going to be made here. It would be a crime to sell out now.

“Ah, Snuggy! Snuggy! If your mother had only lived!” groaned Mr. Morrell. “A woman knows what’s right for a girl better than a man. This is a rough place out here. And even the best of our friends and neighbors are crude. You want refinement, and pretty dresses, and soft beds, and fine furniture – ”

“No, no, Father! I love Sunset Ranch just as it is,” Helen declared, wiping away her tears.

“Aye. ’Tis a beauty spot – the beauty spot of all Montana, I believe,” agreed the dying man. “But you need something more than a beautiful landscape.”

“But there are true hearts here – all our friends!” cried Helen.

“And so they are – God bless them!” responded Prince Morrell, fervently. “But, Snuggy, you were born to something better than being a ‘cowgirl.’ Your mother was a refined woman. I have forgotten most of my college education; but I had it once.

“This was not our original environment. It was not meant that we should be shut away from all the gentler things of life, and live rudely as we have. Unhappy circumstances did that for us.”

He was silent for a moment, his face working with suppressed emotion. Suddenly his grasp tightened on the girl’s hand and he continued:

“Snuggy! I’m going to tell you something. It’s something you ought to know, I believe. Your mother was made unhappy by it, and I wouldn’t want a knowledge of it to come upon you unaware, in the after time when you are alone. Let me tell you with my own lips, girl.”

“Your father’s name is under a cloud. There is a smirch on my reputation. I – I ran away from New York to escape arrest, and I have lived here in the wilderness, without communicating with old friends and associates, because I did not want the matter stirred up.”

“For your mother’s sake, and for yours,” he said. “She couldn’t have borne it. It would have killed her.”

“But you were not guilty, Father!” cried Helen.

“Why, Father, you could never have done anything dishonorable or mean – I know you could not!”

“Thank you, Snuggy!” the dying man replied, with a smile hovering about his pain-drawn lips. “You’ve been the greatest comfort a father ever had, ever since you was a little, cuddly baby, and liked to snuggle up against father under the blankets.

“That was before the big ranch-house was built, and we lived in a shack. I don’t know how your mother managed to stand it, winters. You just snuggled into my arms under the blankets – that’s how we came to call you ‘Snuggy.’”

“‘Snuggy’ is a good name, Dad,” she declared. “I love it, because you love it. And I know I gave you comfort when I was little.”

“Indeed, yes! What a comfort you were after your poor mother died, Snuggy! Ah, well! you shall have your reward, dear. I am sure of that. Only I am worried that you should be left alone now.”

“Big Hen and the boys will take care of me,” Helen said, stifling her sobs.

“Nay, but you need women-folk about. Your mother’s sister, now – The Starkweathers, if they knew, might offer you a home.”

“Yes. She corresponded with Eunice until her death. Of course, we haven’t heard from them since. The Starkweathers naturally did not wish to keep up a close acquaintanceship with me after what happened.”

“But, dear Dad! you haven’t told me what happened. Do tell me!” begged the anxious girl.

Then the girl’s dying father told her of the looted bank account of Grimes & Morrell. The cash assets of the firm had suddenly disappeared. Circumstantial evidence pointed at Prince Morrell. His partner and Starkweather, who had a small interest in the firm, showed their doubt of him. The creditors were clamorous and ugly. The bookkeeper of the firm disappeared.

“They advised me to go away for a while; your mother was delicate and the trouble was wearing her into her grave. And so,” Mr. Morrell said, in a shaking voice, “I ran away. We came out here. You were born in this valley, Snuggy. We hoped at first to take you back to New York, where all the mystery would be explained. But that time never came.

“Neither Starkweather, nor Grimes, seemed able to help me with advice or information. Gradually I got into the cattle business here. I prospered here, while Fenwick Grimes prospered in New York. I understand he is a very wealthy man.

“Soon after we came out here your Uncle Starkweather fell heir to a big property and moved into a mansion on Madison Avenue. He, and his wife, and the three girls – Belle, Hortense and Flossie – have everything heart could desire.

“And they have all I want my Snuggy to have,” groaned Mr. Morrell. “They have refinement, and books, and music, and all the things that make life worth living for a woman.”