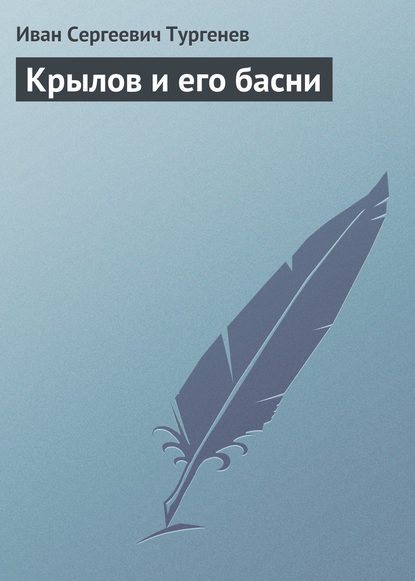 The words «third edition» are particularly agreeable to the ears of a Russian, in connection with this issue of Mr. Ralston’s excellent translation of Krilof’s fables, as they prove that English readers are beginning to feel an interest in the literature of his country, and in the national life and character which they have hitherto only contemplated from a political point о view. And Krilof certainly deserves all the attention thus bestowed upon him. He is the only original fabulist who has appeared since La Fontaine; and though he does not, perhaps, equal the exquisite grace of the inimitable Frenchman, though he has fewer sly strokes of wit, less cunning simplicity in telling a story, he has, on the other hand, more originality of invention. His observant good sense penetrates to the roots of things, and he possesses a genuine kind of phlegmatic humour which betrays the Oriental element in Slavonic nature. In his birth and all the circumstances of his life Krilof was as Russian as possible: he was essentially national in his ways of thinking, feeling, and writing; and it may be maintained without exaggeration that a foreigner who has carefully studied Krilof’s fables will have a better idea of the Russian national character than if he had read through all the travels and essays that attempt to describe it. Russian children learn Krilof by heart as French ones do La Fontaine, without entering into all the wisdom of his teaching, but in later life they return to him with double profit. Like La Fontaine, but to a still greater degree, Krilof has supplied the public conscience with a number of precepts and adages and sayings which have become proverbial even in the mouth of unlettered peasants; no one is oftener quoted than he, and, like the Bible and Shakespeare in England, those who quote him have often no idea of their obligation – proof positive that his work has been completely absorbed into the national popular life from which it sprung. The present day offers no higher reward to literary ambition than this faint reflection of the past grandeur of epic poetry, which is only great because it is impersonal.

Mr. Ralston’s translation leaves nothing to desire in the matter of accuracy or colouring, and the fables which he has added are not amongst the least welcome. The short preface and memoir prefixed to the volume, and the historical and literary notes on some of the fables, have been done conscientiously and con amore. It will not be his fault if Krilof does not prove to be thoroughly «naturalised» in England.

Personally, the present writer remembers to have seen Krilof once a short time before his death. He had a majestic head rather massive and heavy, fine white hair, pendent cheeks, the mouth large but well formed and earnest, the eye fixed and eyelid drooping, an expression of indolence and almost of apathy on the whole face, but with intelligence and humour, as it were, showing through. He scarcely ever spoke, but listened – brilliantly, if I may say so, since his silence was accompanied by an internal sort of smile, as if he were imparting to himself a number of lively observations never destined to be given to the world.