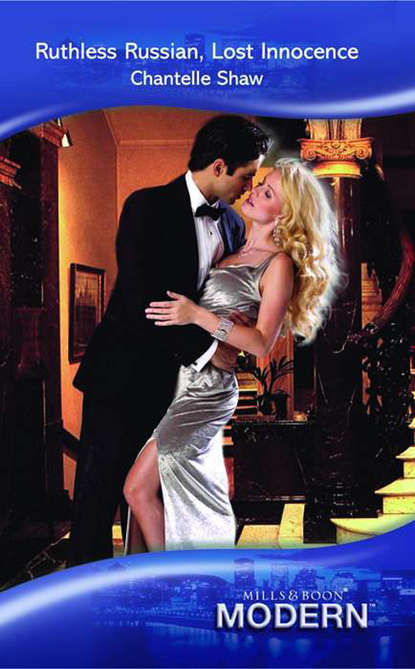 The virgin’s awakeningViolinist Ella Stafford isn’t used to parties, so it’s little wonder she’s overwhelmed by brooding Russian Vadim Aleksandrov! The throbbing, raw attraction takes fragile English beauty Ella out of her depth… …and into his arms! Soon she finds herself sharing his Mediterranean villa, attending glamorous parties and showered with luxuries.Ella should feel elated. Yet there is darkness in Vadim’s past that even Ella’s virginal sweetness cannot penetrate. But will the baby she’s carrying force him to learn to love?

‘I think it would be better if we kept last night as a one-off. I don’t want to have an affair with you…’ Ella faltered, flushing when Vadim’s piercing blue gaze settled thoughtfully on her face. She had the unnerving feeling that he could read the jumble of emotions whirling around her head.

‘Neither of us wants to be tied down in a relationship,’ she reminded him, despising herself for the way her heart-rate quickened when he dropped down onto the bed and wound a few strands of her hair around his fingers.

‘I agree,’ he said coolly. ‘But surely the very fact that we have no desire for a relationship makes us ideal candidates for an affair? There’s nothing to stop us being lovers. And besides,’ he murmured, his voice dropping to a deep, sensual tone that caressed her senses, ‘one night was not enough for either of us—was it, Ella?’

Chantelle Shaw lives on the Kent coast, five minutes from the sea, and does much of her thinking about the characters in her books while walking on the beach. She’s been an avid reader from an early age. Her schoolfriends used to hide their books when she visited—but Chantelle would retreat into her own world, and still writes stories in her head all the time. Chantelle has been blissfully married to her own tall, dark and very patient hero for over twenty years, and has six children. She began to read Mills & Boon® as a teenager, and throughout the years of being a stay-at-home mum to her brood found romantic fiction helped her to stay sane! She enjoys reading and writing about strong-willed, feisty women, and even stronger willed sexy heroes. Chantelle is at her happiest when writing. She is particularly inspired while cooking dinner, which unfortunately results in a lot of culinary disasters! She also loves gardening, walking, and eating chocolate (followed by more walking!). Catch up with Chantelle’s latest news on her website: www.chantelleshaw.com

IT HAPPENED in an instant. A fleeting glance across the crowded auditorium of the Louvre and wham, Ella felt as though she had been struck by a lightning bolt.

The man was standing some distance away, surrounded by a group of seriously chic Frenchwomen who were all vying for his attention. Her first impression in those few heartstopping seconds when their eyes met was that he was tall, dark and devastatingly handsome—but when she tore her gaze from his piercing blue stare she instinctively added the word dangerous to the list.

Shaken by her reaction to a complete stranger, she stared down at her champagne glass, dismayed to find that her hands were trembling, and tried to concentrate on her conversation with a music journalist from the culture section of Paris Match.

‘The audience were enraptured by you tonight, Mademoiselle Stafford. Your performance of Prokofiev’s second violin concerto was truly outstanding.’

‘Thank you.’ Ella smiled faintly at the journalist, but she was still supremely conscious of the intense scrutiny of the man standing on the other side of the room, and it took all her willpower to resist turning her head. It was almost a relief when Marcus appeared at her side.

‘You know everyone’s saying a star has been born tonight?’ he greeted her excitedly. ‘You were bloody marvellous, Ella. I’ve just sneaked a preview of the review Stephen Hill is writing for The Times, and I quote—“Stafford’s passion and technical bravura are out of this world. Her musical brilliance is dazzling, and her performance tonight cements her place as one of the world’s top violinists.” Not bad, eh?’ Marcus could not hide his satisfaction. ‘Come on—you need to circulate. There are at least half a dozen other journalists who want to interview you.’

‘Actually, if you don’t mind, I’d really like to go back to the hotel.’

Marcus’s smile slipped when he realised that Ella was serious. ‘But this is your big night,’ he protested.

Ella bit her lip. ‘I realise that the party is an ideal opportunity for more publicity, but I’m tired. The concert was draining.’ Particularly when she’d spent the few hours before her solo performance ravaged by nerves, she thought ruefully. Music was her life, but the crippling stage fright she suffered every time she played in public was far from enjoyable, and sometimes she wondered if pursuing a career as a soloist was what she really wanted when it made her physically sick with fear.

‘You attracted an A-list audience tonight, and you can’t just disappear,’ Marcus argued. ‘I’ve seen at least two ministers from the French government, not to mention a Russian oligarch.’ He glanced over Ella’s shoulder and gave a low whistle. ‘Don’t look now, but Vadim Aleksandrov is heading this way.’

With a heavy sense of inevitability Ella turned her head a fraction, and felt her heart slam beneath her ribs when her eyes clashed once more with a startling blue gaze. The man was striding purposefully towards her, and she stared transfixed at the masculine beauty of his classically sculpted features and his jet-black hair swept back from his brow.

‘Who is he?’ she whispered to Marcus.

‘A Russian billionaire—made his fortune in mobile phones and now owns a satellite television station, a British newspaper and a property empire that is said to include half of Chelsea—or Chelski, as some now call it,’ Marcus added dryly. He broke off quickly, but Ella did not need the sight of Marcus’s most ingratiating smile to tell her that the man was close behind her. She could feel his presence. The spicy scent of his cologne assailed her senses, and the tiny hairs on the back of her neck stood on end when he spoke in a deep, melodious voice that was as rich and sensuous as the notes of a cello.

‘Forgive my intrusion, but I would like to offer my congratulations to Miss Stafford on her performance tonight.’

‘Mr Aleksandrov.’ Marcus’s hand shot past Ella’s nose as he greeted the Russian. ‘I’m Marcus Benning, Ella’s publicist. And this, of course—’ he patted Ella’s shoulder in a faintly possessive manner ‘—is Lady Eleanor Stafford.’

Ella blushed, and felt a surge of irritation with Marcus, who knew she disliked using her title but insisted that it was a good marketing tool. But as she turned to face the man, Marcus, the other guests, everything faded, and only Vadim Aleksandrov existed. Her eyes flew to his face and her blush deepened at the feral gleam in his gaze. A curious mix of fear and excitement shot through her, together with the ridiculous feeling that her life would never be the same again after this moment. She felt a strange reluctance to shake his hand, and shock ripped through her when he lifted her fingers to his mouth and pressed his lips to her knuckles.

‘Eleanor.’ His accented gravelly voice sent the same quiver of pleasure down her spine that she felt when she drew her bow across the strings of her violin. The feather-light brush of his mouth against her skin burned as if he had branded her, and with a little gasp she snatched her hand back, her heart beating frantically beneath her ribs.

‘It’s an honour to meet you, Mr Aleksandrov,’ Marcus said eagerly. ‘Am I right that your company holds the monopoly on mobile phone sales in Russia?’

‘We certainly took advantage of the gap in the communications market in its early days of trading, but the company has grown and diversified widely since then,’Vadim Aleksandrov murmured dismissively. He continued to stare intently at Ella, and Marcus finally took the hint.

‘Where are all the damn waiters? I could do with a refill,’ he muttered, waving his empty champagne glass before he wandered off towards the bar.

For a split second Ella was tempted to race after him, but the enigmatic Russian’s brilliant blue eyes seemed to exert a magnetic hold over her, and she was so overwhelmed by his potent masculinity that she found herself rooted to the spot.

‘Thank you.’ She struggled to formulate a polite response, her whole being conscious of the electrical attraction that arced between them. She had never experienced anything like it before, never been so acutely aware of a man, and it was frankly terrifying.

Vadim’s sardonic smile warned her that he recognised her awareness of him. ‘I have never heard another non-Russian play Prokofiev with the passionate intensity for which he—and many of my countrymen—are renowned,’ he murmured, in a crushedvelvet voice that seemed to enfold Ella in its intimate caress.

Was that a roundabout way of telling her that he was passionate? The thought came unbidden into her head, and colour flared along her cheekbones as she acknowledged that he had no need to point out what was so blindingly obvious—even to her, with her severely limited sexual experience. Vadim Aleksandrov wore his virility like a badge, and she found the bold appreciation in his eyes as he trailed them over her body deeply unsettling.

‘Are you enjoying the party?’

Ella glanced around the packed reception room, where several hundred guests were all talking at once. The hubbub of voices hurt her ears. ‘It’s very nice,’ she murmured.

The glint of amusement in Vadim’s eyes told her he knew she was lying. ‘I understand you are giving another performance tomorrow evening, so I assume you are staying in Paris?’

‘Yes. At the Intercontinental,’ she added when his brows lifted quizzically.

‘I’m at the George V, not far from you. I have a car waiting outside—can I offer you a lift back to your hotel? Maybe we could have a drink together?’

‘Thank you, but I can’t rush away from the party,’ Ella mumbled, aware that a couple of minutes ago she had planned to do just that. But Vadim Aleksandrov’s blatant sensuality disturbed her composure far too much for her to contemplate socialising with him. The hungry look in his eyes warned her that he would expect a drink in the bar to lead to an invitation up to her room—and she was very definitely not the sort of woman who indulged in one-night stands.

But supposing she had been the sort of woman who invited a sexy stranger to spend the night with her? For a second her imagination ran riot, and a series of shocking images flashed into her mind, of Vadim undressing her and touching her body before he drew her down onto the crisp white sheets of her hotel bed and made love to her.

What was she thinking? She could feel the heat radiating from her face and hastily dropped her eyes from Vadim’s speculative gaze, terrified that he might somehow have read her thoughts.

‘The party is in your honour. Of course I understand your eagerness to remain,’ he drawled in a faintly mocking tone. ‘I’ll be in London next week. Perhaps we could have dinner one evening?’

‘Every evening?’ His sensual smile caused her heart to skip a beat. ‘He’s a lucky man.’