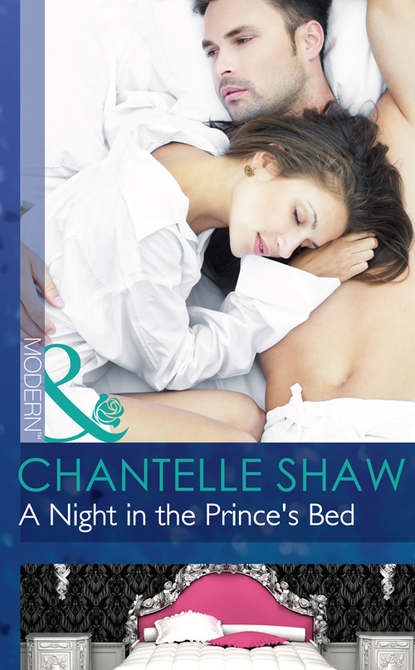 A Night in the Prince's Bed
Chantelle Shaw

Actions speak louder than words!Beautiful Mina Hart has overcome her hearing impairment to become a leading theatre actress. But one stolen night with a gorgeous stranger turns into headline news when it’s revealed he is the Prince of Storvhal.Devastated when he accuses her of using him for publicity, Mina travels to his icy Scandinavian country to proclaim her innocence. But, hiding in his car, she falls asleep and wakes up at Prince Aksel’s private retreat!A heavy snowfall traps them, and now she must rely on her senses to read this haunted and intensely private Prince!Discover more at www.millsandboon.co.uk/chantelleshaw

‘This is wrong.’ Aksel’s eyes rested on her slender figure and her rose-flushed face. ‘You should not have come to Storvhal.’

Mina felt sick as the realisation sank in that he was rejecting her. ‘Last night—’ she began. But he cut her off.

‘Last night was a mistake that I am not going to repeat.’

Mina was unaware of the raw emotion in her voice, and Aksel schooled his features to hide the pang of guilt he felt.

She bit her lip. Her pride demanded that she should accept his rejection and try to salvage a little of her dignity, but she did not understand why he had suddenly backed off. ‘Is it because I’m deaf? You desired me when you didn’t know about my hearing loss,’ she reminded him when he frowned. ‘What else am I supposed to blame for your sudden change of heart?’

‘My heart was never involved,’ he said bluntly. ‘Learning of your hearing impairment is not the reason why I can’t have sex with you again.’

‘Then what is the reason?’ The frustration Mina had felt as a child when she had first lost her hearing surged through her again now. She wished she could hear Aksel. It wasn’t that she had a problem reading his lips, but not being able to hear his voice made her feel that there was a wide gulf between them.

‘I can’t have an affair with you. I am the Prince of Storvhal, and my loyalty and duty must be to my country.’

CHANTELLE SHAW lives on the Kent coast, five minutes from the sea, and does much of her thinking about the characters in her books while walking on the beach. An avid reader from an early age, her schoolfriends used to hide their books when she visited—but Chantelle would retreat into her own world, and still writes stories in her head all the time.

Chantelle has been blissfully married to her own tall, dark and very patient hero for over twenty years and has six children. She began to read Harlequin Mills & Boon

romances as a teenager, and throughout the years of being a stay-at-home mum to her brood found romantic fiction helped her to stay sane!

Her aim is to write books that provide an element of escapism, fun, and of course romance for the countless women who juggle work and home-life and who need their precious moments of ‘me’ time. She enjoys reading and writing about strong-willed, feisty women and even stronger-willed sexy heroes. Chantelle is at her happiest when writing. She is particularly inspired while cooking dinner, which unfortunately results in a lot of culinary disasters! She also loves gardening, taking her very badly behaved terrier for walks and eating chocolate (followed by more walking … at least the dog is slim!).

Chantelle is on Facebook and would love you to drop by and say hello.

A Night in the Prince’s Bed

HE WAS HERE. Again.

Mina had told herself that she would not look for him, but as she stepped out from the wings her eyes darted to the audience thronged in the standing area in front of the stage, and her heart gave a jolt when she saw him.

The unique design of Shakespeare’s Globe on London’s South Bank meant that the actors on stage could see the individual faces of the audience. The theatre was a modern reconstruction of the famous Elizabethan playhouse, an amphitheatre with an open roof, above which the sky was now turning to indigo as dusk gathered. To try to recreate the atmosphere of the original theatre, minimal lighting was used, and without the glare of footlights Mina could clearly see the man’s chiselled features; his razor-edged cheekbones and resolute jaw shaded with stubble that exacerbated his raw masculinity.

His mouth was unsmiling, almost stern, yet his lips held a sensual promise that Mina found intriguing. From the stage she could not make out the colour of his eyes, but she noted the lighter streaks in his dark blond hair. He was wearing the same black leather jacket he had worn on the three previous evenings, and he was so devastatingly sexy that Mina could not tear her eyes from him.

She was curious about why he was in the audience again. It was true that Joshua Hart’s directorial debut of William Shakespeare’s iconic love story Romeo and Juliet had received rave reviews, but why would anyone choose to stand for two and a half hours to watch the same play for three evenings in a row? Maybe he couldn’t afford a seat in one of the galleries, she mused. Tickets for the standing area—known as the yard—were inexpensive and popular, providing the best view of the stage and offering a unique sense of intimacy between the audience and the actors.

Mina tried to look away from him, but her head turned in his direction of its own accord, as if she were a puppet and he had pulled one of her strings. He was staring at her, and the intensity of his gaze stole her breath. Everything faded—the audience and the members of the cast on stage with her—and she was only aware of him.

On the periphery of her consciousness Mina became aware of the lengthening silence. She sensed the growing tension of the actors around her and realised that they were waiting for her to speak. Her mind went blank. She stared at the audience and sickening fear churned in her stomach as she registered the hundreds of pairs of eyes staring back at her.

Oh, God! Stage-fright was an actor’s worst nightmare. Her tongue was stuck to the roof of her mouth and sweat beaded on her brow. Instinctively she raised her hands to her ears to check that her hearing aids were in place.

‘Focus, Mina!’ A fierce whisper from one of the other actors dragged her from the brink of panic. Her brain clicked into gear and, snatching a breath, she delivered her first line.

Kat Nichols, who was playing the role of Nurse, let out an audible sigh of relief.