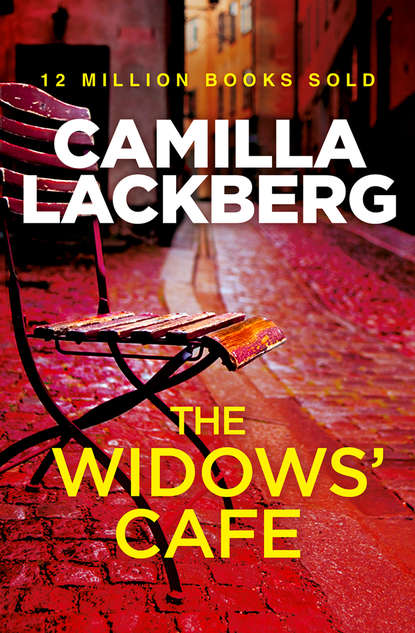 A short story from No. 1 international bestseller and Swedish crime sensation Camilla Lackberg, perfect for fans of Stieg Larsson and Jo Nesbo.Marianne has opened a cafe in memory of her husband: Café Widows. Most customers that walk through the door are middle aged women, accompannied by men whose behaviour is often quite unpleasant. Suddenly there is a policeman on the doorstep, confronting Marianne with the news that there have been several deaths recently. Men of all different ages and origins are dying of heart attacks, after visiting Cafe Widows. Could it just be a coincidence, or is there something more sinister at play?

The buns were arranged on platters. The biscuits were in fancy glass jars next to the cash register, and the satin steel of the brand-new espresso machine gleamed behind her. Marianne walked around to the front of the counter and took a couple of steps back to admire her creation. She’d done the exact same thing every morning since opening the Widows’ Café almost three years ago. Sometimes she found everything to her satisfaction. But sometimes she didn’t. Today she wasn’t entirely pleased with the way the glass of the display had been polished. Inside were the newly made open-face sandwiches, piled high with ham, cheese, roast beef, or shrimp. With a few expert swipes of a dishcloth, she polished the glass so it sparkled in the sun coming through the windows at the front of the shop. She could see her own face reflected in the glass. That round face, which had provoked so many sighs of dissatisfaction from her when she was young. These days she found it perfectly suited to her grey hair, still so thick and lovely as it framed her round face.

It was the location that had made her fall for this place. She’d been thinking about opening a café for ages, but her dream had never materialized because she couldn’t find the right premises. By chance she had come across the old village shop when she was out taking one of her long walks, and for some reason she couldn’t get the place out of her mind. Every little crack, every shabby detail of the building had become etched into her memory. Not that she had paid much attention to how shabby it looked. Instead, she’d seen the potential that was underneath. Now that potential had been realized. She’d put all the money that Ruben had left her into the renovation work, and it had been worth every öre. Best money she ever spent, as the Americans would say. And that was honestly how she felt.

Someone was trying to open the door, so Marianne went over to let in the first customers of the morning. The Widows’ Café was ready to greet the day.

His voice has that tone that makes her instinctively flinch and crouch down, trying to make herself as small as possible. But usually it doesn’t help. He takes a step forward. Now he raises his hand. She looks at the palm of his hand, seeing the lifeline and the heartline. Parallel, and yet intertwined. Then the blow falls. First the sound. That sharp, resounding slap. Then the pain. The burning sensation. And finally darkness.

The bright voice made Marianne look up and study the couple who had just come in. The woman was thin and petite, her eyes flitting around nervously. The man was big, with a presence that felt like an intrusive and unwelcome guest.

‘Where do I usually want to sit?’ he said in a tone of voice that made the woman cringe.

‘Near the window,’ she said timidly as she led him over to a window table a few metres away. She cast a glance at Marianne, who hastened to smile in her direction. The woman looked as if she could use a good supply of smiles.

‘Just coffee for me,’ said the man, taking the seat with the best view of the sea, which was only a short distance away. Frowning with annoyance, he stared out of the window, as if the world outside was standing by to attack him. Then he turned to look at the woman, who was heading towards Marianne.

‘And make sure it’s strong. I don’t want any of that tepid dishwater like we got at the café in town.’

‘Two coffees,’ she said, staring at her hands, which were clutching her purse so tightly that her knuckles were white.

‘Would you care for a bun with your coffee?’ Marianne reached for the platter. ‘It’s on the house. You look as though you could use a little meat on your bones.’

The woman looked at the buns and seemed to hesitate. Then she glanced over her shoulder at the man sitting at the table and firmly shook her head.

‘No. No, thank you. He doesn’t like …’ Again she shook her head, allowing the rest of her sentence to fade away. Her blonde hair fell softly over her shoulders, and Marianne could see tiny scars on her face. Spidery little lines where the skin had split open and then healed.