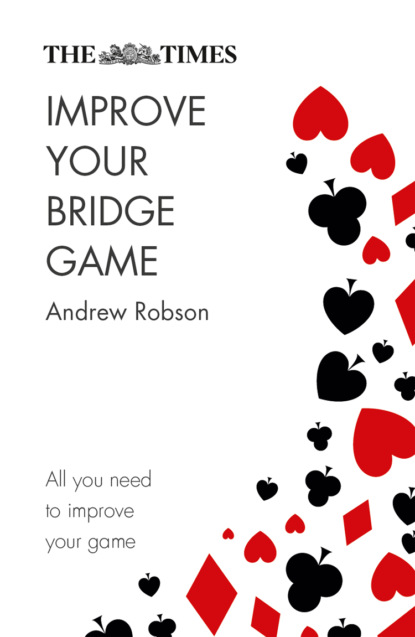 Based on The Times Bridge column, an extensive bridge guide aimed at the less experienced or social player who longs to improve their game, with instructive deals and tips, as well as a helpful Index.Andrew Robson, The Times Bridge Correspondent, is both a champion Bridge player and an inspired teacher. He teaches and tutors at his Bridge Club and has acquired great practical knowledge about how people learn to play Bridge.Based on Andrew Robson’s daily column in The Times, common scenarios are presented with an outline of what actually happened, as well as what should have happened. Along with every deal is the very popular handy tip ‘If you remember just one thing…’, which features throughout the book.The first section of the book, ‘The Game’, is a basic outline providing the key to playing a sensible game of Bridge, subdivided into ‘Bidding’, ‘Declarer Play’ and ‘Defence’.The reader can either read ‘The Game’ first, paying particular attention to the tips, or they can dip in and out of the book, picking a common mistake at random, with the option to cross-reference to the same tip in ‘The Game’ section.Bridge is now reaching a new audience, and is being played by people of all ages. Let Andrew Robson help you to improve your game!Previously published in 2005 as The Times Bridge: Common Mistakes and How to Avoid Them

The Times is a registered trademark of Times Newspapers Ltd

All rights reserved under International and Pan-American Copyright Conventions. By payment of the required fees, you have been granted the nonexclusive, nontransferable right to access and read the text of this e-book on-screen. No part of this text may be reproduced, transmitted, downloaded, decompiled, reverse-engineered, or stored in or introduced into any information storage and retrieval system, in any form or by any means, whether electronic or mechanical, now known or hereafter invented, without the express written permission of HarperCollins e-books.

This is one of the few Bridge books aimed at the social or less experienced player, as opposed to the tournament player. If you long to improve, but find yourself repeating the same mistakes and perhaps not even knowing that they are mistakes, then this book is for you.

In the short opening section, ‘The Game’, I set out the keys to holding your head up high at the Bridge table. Incorporated into each of the three subsections – Bidding, Declarer Play, Defence – are all the tips. Each tip is numbered, enabling you to cross-reference it with the relevant deal in the main body of the book.

The pages that follow are based on my Friday column in The Times, entitled ‘Common Mistakes for the Less Experienced’. Each page contains an instructive deal and a salutary lesson: what happened when the hand was played at the table, and what should have happened. The analysis ends with the numbered tip.

You can read ‘The Game’ first, in its entirety. Or you can flick back and forth from the numbered tip in ‘The Game’ to its deal in the main body of the book. Alternatively you can pick a deal at random, with the option of cross-referencing each tip in ‘The Game’.

I hope you enjoy the book and find it instructive. If you are not a regular Times reader, you can access my daily column from The Times online www.timesonline.co.uk (http://www.timesonline.co.uk). For more information about myself and my Bridge School in South West London see www.andrewrobson.co.uk (http://www.andrewrobson.co.uk).

Bridge is the most widely played game in the world, and surely the best. It is endlessly fascinating at whatever level it is played, from complete beginner up to world champion. Even experts never truly conquer the game – a blessing, or Bridge would go the way of Noughts and Crosses. As if to emphasize this, Computer Bridge is lagging behind Computer Chess or Backgammon. The skills required to be a top Bridge player are so many and varied.

A microcosm of life, Bridge combines competition (against the opponents) and co-operation (with partner). Perhaps the single most important joy of the game is this partnership element. From the moment you pick up your 13 cards to form your ‘hand’, you try to convey messages to partner about it. This communication of information in the first phase of the game – the bidding (or auction) – leads to one partnership (the one making the final – higher – bid) contracting to make a designated number of tricks in their chosen trump suit. Then the play begins – will they prevail, or will they be prevented from achieving their trick target? A few minutes later, a totally new deal begins and with it a whole new set of challenges.

INTRODUCTION I will be teaching a simple version of English Standard Acol, incorporating a 12–14 ‘Weak’ notrump and Four-Card Majors. I have focussed primarily on the first stages of an auction: if the first few bids are accurate, a sensible contract will normally be reached.

THE BASICS When first looking at your hand, count the high-card points (ace = four; king = three; queen = two; jack = one). An average hand will contain ten points (an ace, a king, a queen and a jack). Also look at your distribution. Are your suits of relatively similar length (‘balanced’), or is there some disparity (‘unbalanced’)?

You must then try to describe your hand to partner during the first phase of Bridge: the bidding (or auction). There are two objectives of the bidding: you must ascertain (i) whether you have a mutually compatible trump suit, a ‘fit’ (eight or more cards in one suit between the partnership), and (ii) how many of the 13 tricks for which to aim with that suit as trumps. Bids must increase, starting from 1