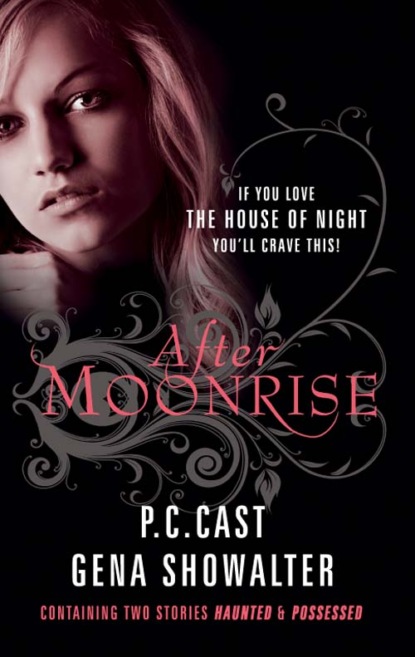 After Moonrise, the elite detective agency, crosses into the dark side, but it can be dangerous when the living communicate with the dead…HAUNTED by P.C. CAST Curtis Raef can channel the most violent of emotions. His power has solved hundreds of police investigations. But his gift comes with a curse… cynical, hard and alone, he’s burning out fast. Then Lauren Wilcox arrives with a haunting case: her murdered twin sister is communing with Lauren’s spirit. Raef’s the only one who can help. But which twin does he want to save? POSSESSED by GENA SHOWALTERThe picture Aurora Harper’s painting is so disturbing she’s convinced she’s witnessed a murder and suppressed the memory. Now she needs Detective Levi Reid to help her track down the victim – and the killer. But Levi’s dealing with his own issues, blacking out for no reason at all. They’ll step into the dark together…but are they ready for what they might find? NEW YORK TIMES BESTSELLING AUTHORS

Praise for the novels of No.1New York Timesbestselling author

‘One of the premier authors of paranormal romance’

‘The Showalter name on a book means

For more information about After Moonrise and other new paranormal and urban fantasy fiction available from Harlequin MIRA, visit www.mirabooks.co.uk

This one is for my man, the Rose. Thank you for

reminding me about hope. I love you.

I want to send hugs and kisses to Gena Showalter!

It is beyond awesome to be able to work on cool

projects with my girlfriend. Ms Snowwater,

I totally heart you!

A big thank you to my wonderful, long-time editor

Mary-Theresa Hussey. It is soooo nice to be working with you again!

THANK YOU FOR THE TU DETAILS.

As always, I appreciate, respect and adore

The bully’s dad caused Raef to discover his Gift. It happened twenty-five years ago, but to Raef the memory was as fresh as this morning’s coffee. You just don’t forget your first time. Not your first orgasm, your first drunk, your first kill and, not for damn sure, your first experience of being able to Track violent emotions.

The bully’s name was Brandon. He’d been a big kid; at thirteen he’d looked thirty-five—and a rough thirty-five at that. At least, that’s what he’d looked like through nine-year-old Raef’s eyes. Not that Brandon picked on Raef. He hadn’t—not especially. Brandon mostly liked to pick on girls. He didn’t hit ‘em. What he did was worse. He found out what scared them, and then he tortured them with fear.

Raef discovered why the day Brandon went after Christina Kambic with the dead bird. Christina wasn’t hot. Christina wasn’t ugly. She was just a girl who had seemed like every other teenage girl to young Raef: she had boobs and she talked a lot, two things that, even at nine, Raef had understood were part of the pleasure and the pain of females.

Brandon didn’t target Christina because of her boobs or her mouth. He targeted her because somehow he had found out she was utterly, completely terrified of birds.

The part of the day that was burned into Raef’s memory began after school. Brandon had been walking home on the opposite side of the street from Raef and his best friend, Kevin. On Brandon’s side of the street was a group of girls. They were giggling and talking at about a zillion miles per hour. Brandon was ahead of them and, as usual, by himself. Brandon didn’t really have any friends. Raef had barely noticed him and only kinda remembered that he’d been kicking around something near the curb.

Raef and Kevin had been talking about baseball tryouts. He’d wanted to be shortstop. Kev had wanted to be the pitcher. Raef had been saying, “Yeah, you got a better arm than Tommy. No way would Coach pick—”

That’s when Christina’s bawling had started.

“No, please no, stop!” She was pleading while she cried. Two of her friends had screamed and run off down the street. Two more had stayed and were yelling at Brandon to stop.