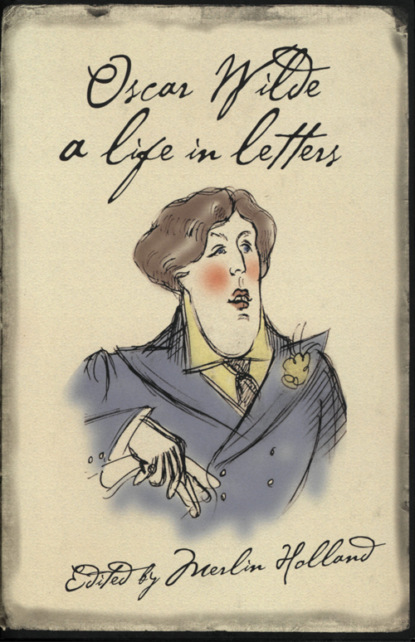 A Life In Letters

Selected and edited by

To the memory of Rupert Hart-Davis, with love and gratitude.

A Sort of Freedom (#litres_trial_promo)

The Second Time Around (#litres_trial_promo)

The enduring fascination of Oscar Wilde more than a century after his death remains a literary phenomenon. His creative output, by comparison with many other nineteenth century writers, was relatively small, yet it was spread over poetry and prose poems, literary and artistic criticism, essays, lectures, short stories and fairy tales, historical melodramas, society comedies and a single novel, The Picture of Dorian Gray, for which he has become known across the world. Both his critics and his admirers have been legion, some insisting that he was merely a passing socio-cultural phenomenon and the author of lightweight popular works, and others viewing him as a modern thinker, bridging two centuries, an astute critic and commentator, a writer at odds with the stuffiness of his age, whose ‘over-the-topness in knocking the bottom out of things’ in Seamus Heaney’s words, amused but finally enraged his tight-laced Victorian contemporaries.

Whether he has a deserved place in the canon of great authors or is merely a first-rate funny-man struggling to rise beyond the second division of literary excellence, one thing is certain: he remains one of the most accessible and appealing writers of all time. Paradoxically, though, for all the thousands of studies published on Wilde, there are aspects of his life which are still enigmatic, unexplained even. The duality in his character with its inherent contradictions, intrigues and confuses: the Anglo-Irishman with Nationalist sympathies; the Protestant with life-long Catholic leanings; the married homosexual. And Oscar himself did nothing to help matters by deliberately donning masks to mislead. In 1885 he cautioned the painter James Whistler against revealing too much of himself and his art in his lectures. ‘Be warned in time, James, and remain, as I do, incomprehensible; to be great is to be misunderstood,’ he remarked, and spent the rest of his life ensuring that he was.

He left no intimate diary, wrote no memoirs and the Boswell who might have given us a memorable life, Robert Ross, felt that the task of rehabilitating his friend posthumously was best done as an astute literary executor; not that we could have relied much on the accuracy of any sort of personal memoir from the man who referred to ‘a morbid and unhealthy faculty of truth-telling’ as being fatal to the artistic imagination.

But like anyone of a literary disposition, Oscar Wilde occasionally needed to express himself without his public mask, and his letters, particularly those written to intimate friends without thought of publication, are in effect the autobiography that he never wrote and as close as we shall come to the magic of hearing that legendary talker in person. They comment openly on his life and his work from the early years of undergraduate friendships, through the year-long lecture tour in America of a striving and ambitious young ‘Professor of Aesthetics’ as he styled himself, to the short period of fame and success in the early 1890s followed by his disgrace and imprisonment. Thereafter they include the most poignant and revealing letters of all, those which cover the five long years between his downfall and his early death in exile at 46, during which he suffered the ultimate indignity for one of his generosity – poverty and having to borrow money from friends. Even in adversity, though, his humour does not desert him and he is able to share with his readers that greatest of gifts – the ability to smile at one’s own misfortune.

The first major edition of Wilde’s letters appeared in 1962, meticulously edited by the late Rupert Hart-Davis. At the time, homosexuality in Britain was still illegal and I was an impressionable young teenager at school, so naturally the question of expurgation was discussed. Many of Wilde’s post-prison letters were quite explicit about his sexual inclinations and it led to much agonising in the family about publishing them in their entirety. My father finally took the advice of his old friend Rebecca West who persuaded him that by then suppression was pointless and, with some lingering unease, he agreed to their uncensored publication. As it turned out, his misgivings were totally unfounded and the first publication of so much autobiographical material gave an entirely new impetus to the study of Wilde and a much greater understanding of the complexities of his character. A supplement was published in 1985 and a much revised and enlarged edition, The Complete Letters of Oscar Wilde, bringing the total number to 1562, was produced in 2000 to mark the centenary of his death.

All these editions, however, including a Selected Letters in 1976, relied heavily on the scholarly apparatus of copious footnotes to put the letters in context and I feel that the time has now come to make my grandfather’s correspondence accessible to a broader public with only a minimum of editorial intervention. To this end, I have made a very personal selection of the letters, some 400 in total, which seem to me to reflect the man, warts and all, whom I have come to love and respect as a relative after twenty years of immersing myself in his life and works. By interspersing the letters with the smallest amount of necessary explanation and biography, I hope that readers will be able to listen to Oscar in his own words more or less uninterrupted and I am certain that anyone unfamiliar with Wilde as a correspondent will find it packed with unexpected delights. For one thing, his letters show that the public perception of Wilde as the lightweight author of society comedies, a few memorable poems and some fairy stories must finally make room for Wilde as a hard-working professional writer, deeply interested by the issues of his day and carrying in his intellectual baggage something that we all too frequently overlook, a quite extraordinary classical, literary and philosophical education.

The editorial principles employed in transcribing the letters have been explained at length in The Complete Letters of Oscar Wilde (Fourth Estate, 2000) and given the nature of the present edition, it would seem unnecessary here to do more than summarise them briefly.

Wilde’s spelling was mostly good, but he often misspelled proper names, even of places like Babbacombe, Berneval and Posillipo where he stayed for several months. These have been corrected along with other such slips throughout. His punctuation, except in his more formal letters, consisted mainly of short dashes, which he used to represent every kind of stop. They make the letters difficult to read, and normal punctuation has been used as the sense seems to demand. A case in point is the letter to Alfred Douglas in March 1893 which has been reproduced exactly as he wrote it, partly to show his emotional anguish and partly to illustrate the problems of transcription. Ellipses which occur in the text are Wilde’s own unless enclosed in square brackets.

Each address from which Wilde wrote is given in full the first time it occurs, and thereafter abbreviated to the essential minimum. No distinction has been made between printed and written addresses. In letters where he failed to indicate the place of writing it has been conjectured between square brackets, but in some instances this has not been possible, as for example when he was on tour in America, and the address has been omitted. For convenience the address is always printed on the right, and the date, in standardised form, on the left.

Wilde seldom dated his letters. Postmarks have often helped (though occasionally letters have strayed into wrong envelopes), and other dates have been deduced from internal evidence or cross-reference. All dates editorially supplied are enclosed within square brackets: doubtful ones are preceded by a query. Such editorial decisions, unless self-evident, were explained in the footnotes to The Complete Letters.

I considered carefully whether or not to include Wilde’s long letter (50,000 words) from prison to Alfred Douglas, De Profundis, and reluctantly decided against it. I realise that this may seem inconsistent with the idea of this selection, since of all his letters it is the one in which he lets us see most deeply into his innermost thoughts. However, since its first integral publication in 1962, it has been made widely available and its inclusion here would have made this volume, intended to be reader-friendly both in size as well as in content, unmanageably large. As an account, though, of his relationship with Alfred Douglas and of the debacle with the Marquess of Queensberry, as well as a reflection on his past glories and excesses, his misery in prison and at his aspirations for the future, it is an intimate and powerful document which should be read alongside this selection.

I have benefited over the years of working on Wilde’s letters from the generosity and kindness of many scholars, collectors and friends, all acknowledged at length in The Complete Letters; for reasons of space it is not possible here to reiterate my thanks in detail, but they know who they are and I hope that they will accept a general expression of my profound gratitude once more. To Rupert Hart-Davis I owe, together with my family, more than mere words can express; I have dedicated this selection to his memory with much love and respect. It was his decision fifty years ago to publish the first edition of Oscar Wilde’s letters which helped to put my grandfather back into the position which he lost in 1895 as one of the most charismatic and fascinating figures in English literary history.

Lastly my thanks to Mitzi Angel and Catherine Blyth at Fourth Estate for their old-style professionalism as true publisher’s editors, friends and advisers.