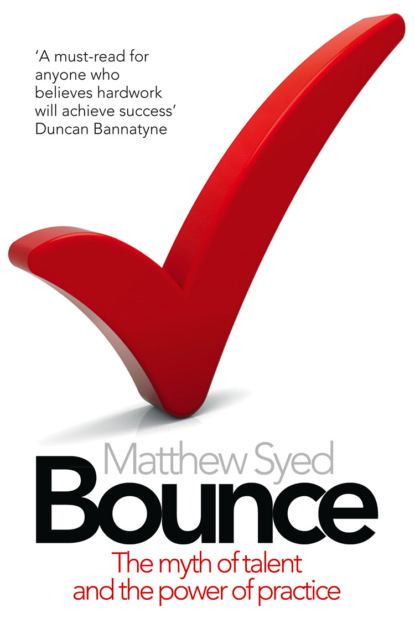 Matthew Syed
Bounce: The Myth of Talent and the Power of Practice

Bounce: The Myth of Talent and the Power of Practice
Matthew Syed

Originally published as BOUNCE: How Champions Are MadeThe ‘Freakonomics of Sport’…What are the real secrets of sporting success, and what lessons do they offer about life in general? Why doesn’t Tiger Woods “choke”? Why are the best figure skaters those that have fallen over the most and why has one small street in Reading produced more top table tennis players than the rest of the country put together.As a three-time Commonwealth table-tennis champion and two-time Olympian, Matthew Syed is perfectly placed to show what it takes to get to the top in any discipline. And as an award-winning writer for the sports and comment pages of the Times – and holder of a prize-winning degree from Oxford University – he knows the facts, the science and the personalities better than anyone.In his book Matt overturns myths and outdated thinking to show “why it is that top sportsmen seem to perceive faster, smarter and deeper than the rest of us.” He draws on the latest in neuroscience and psychology to discover why so many top athletes are superstitious, and meets the Hungarian man who turned his daughters into three of the best chess players in history – and explains how.Along the way, he introduces an extraordinary cast of footballers, cricketers, baseball players, speedskaters, scientists and experts – and interviews the East German athlete who became a man, and her husband. Matthew’s book is crammed full of fascinating stories and telling studies, insights and statistics, all brought together to make a wonderfully thought-provoking read.Matthew’s book is not simply the Freakonomics of sport though – it looks at big questions such as the nature of talent, what kind of practice actually works, how to achieve motivation, drugs in sport (and life) and whether black people really are faster runners. Fresh, ground-breaking and tackling subjects with wide appeal, Matthew’s book is sure to be one of the most talked-about of the year.

How Champions Are Made

First published in Great Britain in 2010

The right of Matthew Syed to be identified as the author of this work has been asserted by him in accordance with the Copyright, Designs and Patents Act 1988

All rights reserved under International and Pan-American Copyright Conventions. By payment of the required fees, you have been granted the non-exclusive, non-transferable right to access and read the text of this e-book on screen. No part of this text may be reproduced, transmitted, downloaded, decompiled, reverse engineered, or stored in or introduced into any information storage and retrieval system, in any form or by any means, whether electronic or mechanical, now known or hereinafter invented, without the express written permission of HarperCollins e-books.

HarperCollinsPublishershas made every reasonable effort to ensure that any picture content and written content in this ebook has been included or removed in accordance with the contractual and technological constraints in operation at the time of publication.

3 The Path to Excellence (#litres_trial_promo)

6 The Curse of Choking and How to Avoid It (#litres_trial_promo)

9 Drugs in Sport, Schwarzenegger Mice, and the Future of Mankind (#litres_trial_promo)

In January 1995, I became the British number-one table tennis player for the very first time which, I am sure you will agree, is a heck of an achievement. At twenty-four years of age, I suddenly found myself on the receiving end of regular invitations to speak to school audiences about my rise to international glory, and would often take my gold medals along to dazzle the youngsters.

Table tennis is a pretty big sport in the UK, with 2.4 million participants, 30,000 paid-up members of the governing body, thousands of teams, and serious riches for those who excel. But what made me special? What had marked me out for sporting greatness? I came up with a number of attributes: speed, guile, gutsiness, mental strength, adaptability, agility, and reflexes.

Sometimes I would marvel at the fact that I had these skills in such abundance that they were capable of elevating me – little me! – beyond hundreds of thousands of others aspiring to that precious top spot. And all this was doubly amazing, considering I had been born into a family in an ordinary suburb of an ordinary town in south-east England. There was no silver spoon. No advantages. No nepotism. Mine was a triumph of individuality; a personal odyssey of success, a triumph against the odds.

This, of course, is the way that many who have reached the top in sport, or indeed in any other field, choose to tell their stories. We live in a culture that encourages this kind of soaring individualism. Hollywood is full of such narratives, often sugarcoated in that well-known American Dream sentimentality. But while these stories are inspirational, rousing, and compulsively entertaining, are they true? Here is my story in table tennis, retold with the bits that I chose to ignore the first time around, as they diminished the romance and the individuality of my triumph.

In 1978 my parents, for reasons they are still unable to explain (neither of them plays table tennis), decided to buy a table tennis table – a super deluxe 1000 with gold lettering, since you ask – and to put it in our large garage. I don’t know the exact percentage, but you can imagine that there were not many youngsters of my age in my home town who possessed a full-size, tournament-specification table. Fewer still had a garage in which it could be housed full-time. This was my first bit of good fortune.