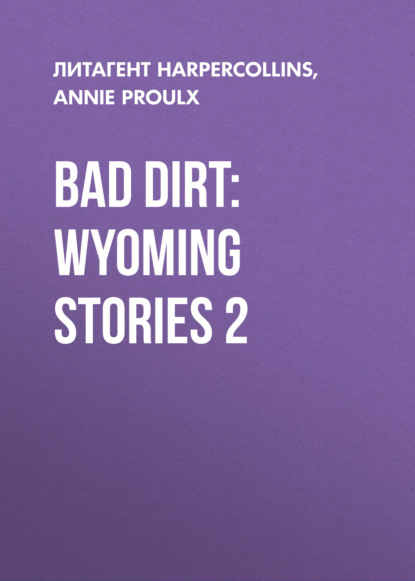 Pulitzer Prize-winning author Annie Proulx follows the success of Close Range with another remarkable collection of short stories set in Wyoming.Bad Dirt is filled with the vivid and willful characters for which Proulx has become known. Each occupies a community or landscape described in rich and robust language, with an eye for detail unparalleled in American fiction.In ‘The Contest’, the men of Elk Tooth, Wyoming, vow to put aside their razors for two seasons and wait to see who has the longest beard come the 4th of July. Deb Sipple, the moving protagonist of ‘That Trickle Down Effect’, finds that his opportunism – and his smoking habit – lead to a massive destruction. And ‘What Kind of Furniture Would Jesus Pick?’ is the story of Gilbert Wolfscale, whose rabid devotion to his ranch drives off his wife and sons.Proulx displays her wit in every story of this stunning collection, as well as her knowledge of the West, of history, of ranching and farming. Her profound sympathy for characters who must use sheer will and courage to make it in tough territory makes this collection extraordinarily compelling.

First published in paperback by Harper Perennial in 2005, reprinted 4 times.

First published in Great Britain in 2004 by Fourth Estate

Originally published in the USA in 2004 by Scribner

‘The Trickle Down Effect’, ‘What Kind of Furniture Would Jesus Pick?’, ‘Man Crawling Out of Trees’ and ‘Summer of the Hot Tubs’ previously appeared in The New Yorker, ‘The Old Badger Game’ in Playboy; ‘The Contest’ in The Virginia Quarterly Review; and ‘The Wamsutter Wolf’ in The Paris Review.

This short story collection is entirely a work of fiction. The names, characters and incidents portrayed in it are the work of the author’s imagination. Any resemblance to actual persons, living or dead, events or localities is entirely coincidental.

All rights reserved under International and Pan-American Copyright Conventions. By payment of the required fees, you have been granted the non-exclusive, non-transferable right to access and read the text of this e-book on-screen. No part of this text may be reproduced, transmitted, down-loaded, decompiled, reverse engineered, or stored in or introduced into any information storage and retrieval system, in any form or by any means, whether electronic or mechanical, now known or hereinafter invented, without the express written permission of HarperCollins e-books.

What Kind of Furniture Would Jesus Pick? (#litres_trial_promo)

Man Crawling Out of Trees (#litres_trial_promo)

Summer of the Hot Tubs (#litres_trial_promo)

ON A NOVEMBER DAY WYOMING GAME & FISH WARDEN Creel Zmundzinski was making his way down the Pinch-butt drainage through the thickening light of late afternoon. The last pieces of sunlight lathered his red-whiskered face with splashes of fire. The terrain was steep with lodgepole pine giving way on the lower slope to sagebrush and a few grassy meadows favored by elk on their winter migration to the southeast. Occasionally, when the sight lines were clear, he caught the distant glint of his truck and horse trailer in the gravel pullout far below. He rode very slowly, singing of the great Joe Bob, who was “… the pride of the backfield, the hero of his day”* (#litres_trial_promo) in front of him walked the malefactor without hunting license who had been burying the guts of a cow moose when Creel came upon him. The man’s ATV was loaded with the hindquarters. The rest of the carcass had been left to rot.

“This is a protected no-hunt area,” said Creel. “Let’s see your hunting license.”