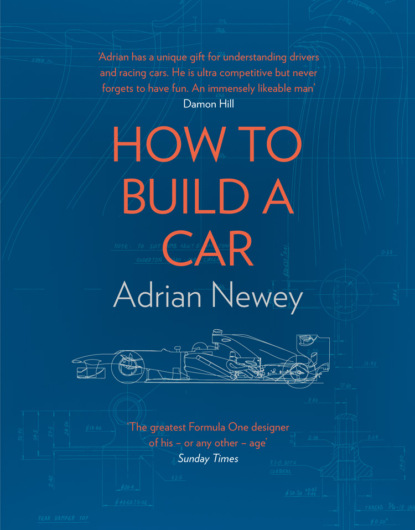 Adrian Newey
How to Build a Car

How to Build a Car
Adrian Newey

'Adrian has a unique gift for understanding drivers and racing cars. He is ultra competitive but never forgets to have fun. An immensely likeable man.' Damon Hill

The world’s foremost designer in Formula One, Adrian Newey OBE is arguably one of Britain’s greatest engineers and this is his fascinating, powerful memoir.

How to Build a Car explores the story of Adrian’s unrivalled 35-year career in Formula One through the prism of the cars he has designed, the drivers he has worked alongside and the races in which he’s been involved.

A true engineering genius, even in adolescence Adrian’s thoughts naturally emerged in shape and form – he began sketching his own car designs at the age of 12 and took a welding course in his school summer holidays. From his early career in IndyCar racing and on to his unparalleled success in Formula One, we learn in comprehensive, engaging and highly entertaining detail how a car actually works. Adrian has designed for the likes of Mario Andretti, Nigel Mansell, Alain Prost, Damon Hill, David Coulthard, Mika Hakkinen, Mark Webber and Sebastian Vettel, always with a shark-like purity of purpose: to make the car go faster. And while his career has been marked by unbelievable triumphs, there have also been deep tragedies; most notably Ayrton Senna’s death during his time at Williams in 1994.

Beautifully illustrated with never-before-seen drawings, How to Build a Car encapsulates, through Adrian’s remarkable life story, precisely what makes Formula One so thrilling – its potential for the total synchronicity of man and machine, the perfect combination of style, efficiency and speed.

How to Build а Car

All rights reserved under International and Pan-American Copyright Conventions. By payment of the required fees, you have been granted the nonexclusive, non-transferable right to access and read the text of this e-book on screen. No part of this text may be reproduced, transmitted, downloaded, decompiled, reverse engineered, or stored in or introduced into any information storage retrieval system, in any form or by any means, whether electronic or mechanical, now known or hereinafter invented, without the express written permission of HarperCollins e-books.

Clouds were gathering that day. Rain was forecast. Feeling scrutinised, I lowered myself creakily into the cockpit of the FW15, painfully aware that at 35, after 10 years in the business, and with two constructors’ championships under my belt, I was about to take my first proper spin in a Formula One car – in fact, my first real drive on a race track, period.

It was 1993, and I was chief designer at Williams. Frank Williams, owner of the team, had been talked into letting a journalist take one of our cars for a spin. What you might call a promotional drive. With that idea gaining traction, co-founder and technical director, Patrick Head, thought that the senior engineers, him, me and Bernard Dudot, who was in charge of Renault engine development, should also have a go.

And so here I was, sitting in the car at the Paul Ricard circuit in the South of France, absorbing from a driver’s angle all the things I’d paid so little attention to as an engineer: the procedure for the ignition sequence; the whine and howl of the engine – a feeling of being cocooned but alone in the cockpit, as though the sheer volume and bone-shaking drama of it is physically holding you in place. Nerves suddenly give a feeling of intense claustrophobia.

‘You’ve got to be smooth on the clutch or you’ll stall it,’ I’d been warned.

I didn’t want to do that. Just the pride talking here: after all I’d designed it; I really didn’t want to stall it – like some kind of competition winner.

I stalled it. Those carbon clutches are so aggressive. You have to give the engine about 5,500rpm, which is like trying to move off at the rev limit for a normal road car. Even then you’re barely touching the throttle.

They wound it up again and this time I managed to get off the line, tentative but wanting to give a good account of myself. Taking to the straight, I had the traction control wound up high for stability, but even so it felt like I was wrestling with the car rather than driving it. I was wearing my motorcycle helmet, which was in constant danger of being sucked off my head, the chin strap throttling me. I’d thought the constant howling noise was immense at a standstill, but on the track it’s like World War III breaking out in the cockpit. The airbox is above your head so it felt as though the V10 was screaming at me, while the sheer forward thrust, the sense of the car wanting to break free of my puny control, was breathtaking. We’re used to having absolute dominion over our machines, but not me over this one: the FW15 had around 780bhp in a car weighing 500kg plus the driver; so me with kit on, say 580kg, gave a very, very high power-to-weight ratio. And it was stunning.

The clutch at that time was still a left-foot pedal – these days it’s on the steering wheel. Even so, you only use the clutch once, to get rolling, the rest of the time your left leg is unemployed. The right, of course, is trying to stay on the accelerator, though the monkey brain is telling it to get back on the brake pedal. The shift itself was the flappy paddle, still a relatively new feature that had not yet spread on to road cars. Lights on the dash – green, green, amber – indicated the build-up of revs. My limit was 14,000.

The second green blinks on at 13,700rpm. Almost there.

That little sequence takes about half a second.

Gradually becoming accustomed to the noise and beginning to feel as though I was controlling the car and not the other way around, I thought how intuitive the driving controls are. Green. Green. Amber. Change. It made me see Paul Ricard from a new vantage point, and the act of piloting a Formula One car from a fresh perspective. I was in my forties when the bug to actually race rather than just design the cars bit deep – but it first nibbled at that moment.

It began to rain – chucking it down with rain. I’d started to get a bit cocky but the combination of inexperienced (but gathering in confidence) driver and the rain was not a good one, and as my engineer’s brain began to think about that redundant left leg, and whether it could be positioned differently to allow a narrower and more aerodynamically efficient front to the chassis, I lost a little focus. Before you knew it, I’d spun the FW15.

Good thing about Ricard: there are lots of run-offs. You have to be going some to hit anything at Ricard and I wasn’t, so I didn’t, and no, I wasn’t quick with the clutch, so yes, I stalled it again.

There’s no on-board starter on the car. If you spin and don’t manage to keep the engine running, you have two problems: first, the engine’s stopped, so you’ll need mechanics armed with a pit starter motor to get back in business; second, it’s stuck in whatever gear you were in at the time, and because the gear shift is hydraulically powered, it’s not until the engine is running that you can then go back down through the gears. But, of course, the mechanics can’t start the car in gear, because it would race off away from them. They need to come to the car with a little ratchet spanner and manually rock the car backwards and forwards while working the spanner on the end of the gear-shift barrel until it gets back down to neutral. Only then can they put the starter in and restart the car and off you go again.

First drive in an F1 car, at the end of ‘93. Surprisingly, I don’t look scared witless!

So there I waited. After five minutes or so, the mechanics arrived in a hire car. This had brightened their day, and yes, I was on the receiving end of some light-hearted banter. When everything was safe I took off again, clocking up more laps, really getting into it now, feeling a bit more at one with the car. Speeds? Now you’re asking. At Monza, cars reach speeds of 220mph. Me at Ricard, I got it up to 175mph that day, which obviously is not what Alain Prost or Damon Hill would have settled for in that car, but still, for a 34-year-old engineer on his first outing, it was fast enough.

Indeed, by the following June, when I raced the FW15 against Christian Fittipaldi and Martin Brundle ‘up the hill’ at the Goodwood Festival of Speed, I felt comfortable simply driving it. After all, it’s actually relatively easy to drive a Formula One car. Throttle, Green, Green, Amber. Change. Brake, turn the wheel, point it at a corner, accelerate. Simple. It’s like an arcade game.

The challenge is doing it faster than everybody else without losing control. That is an entirely different level.

Born in 1958, I came of age in a world infatuated with the motorcar: Scalextric, Formula One, The Monte Carlo Rally. At 10 years old I watched a Lamborghini tumble down a mountainside and Mini Coopers pull off The Italian Job. And when Kowalski slapped his Dodge Charger into fifth and accelerated away from the cops in Vanishing Point, I yelled in amazement, ‘He’s got another gear!’ and then slid down in my seat as what felt like the whole of the cinema turned to glare at me.