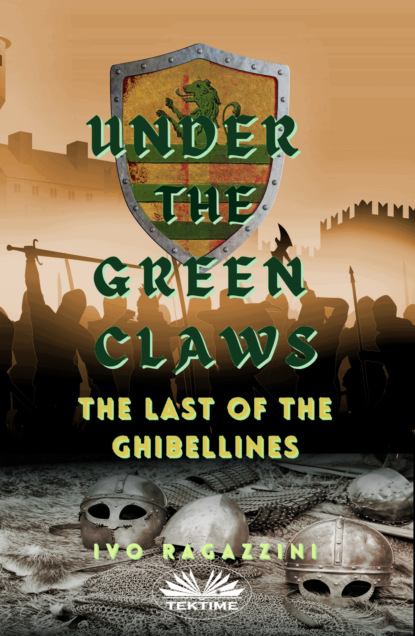 Under The Green Claws

Under the green Claws is Dante's reference to an epic battle, which ended in a massacre towards the end of the thirteenth century, between a Franco-Guelph army, sent by Pope Martin IV, and the last remaining Italian Ghibellines after the death of Frederick II.
They had converged from all over Italy in Forlì, to defend it as the last remaining Ghibelline city with imperial laws. With a sensational sortie, they surprised and massacred the French army that had been besieging them for a year.
How and why this conflict came about and how things turned out will naturally be the subject of this book.
In fact it is a historical battle, brought to light by the darkness of the centuries, dedicated to the last Italian Ghibellines who, refusing to bow to the Pope, were remembered by Dante, when in the divine comedy he wrote … and of the Franceschi a bloody pile,Under the green Claws are found.


In 1282, after a long series of conflicts between Guelphs and Ghibellines, an army organized by Pope Martin IV, made up of eighteen thousand French and Italian Guelph soldiers, was sent to Romagna to defeat the last Ghibellines once and for all who had gathered in Forlì to defend that land that they considered imperial dominion.
The last of the Italian Ghibellines, who remained faithful to the will of Emperor Frederick II, who had died thirty years earlier, converged from all over to aid the people of Forlì, who still proudly carried the imperial black eagles on a field of gold, which Frederick II himself had personally given them.
How things turned out and why such a situation came about is the subject of this book.
Even what Romagna was in ancient times is the subject of this story.
Romagna is a land rich in traditions and history that have been handed down over the centuries.
How this land was born and what Romagna was like at the time of Rome is not that difficult to discover, and in fact you will see that some of these things will be investigated in this story.
Sooner or later I will write a detailed historical account of Romagna, but the real purpose of this book is, and remains, the siege and battle involving the last of the Italian Ghibellines, which took place in Forlì towards the end of the 13th century.
As this story will inevitably account, for the first time ever, much of the information about the true origins of Forlì, which monuments and imperial traditions it inherited and why it became the last Ghibelline stronghold.
It will explain who the Ordelaffi really were and many other forgotten historical figures, such as the astrologer Guido Bonatti and the fighting friar Geremia Gotto, who were at the time present among the ranks of the Ghibelline.
Naturally, it will also tell you in detail how the Ghibellines under the command of Guido da Montefeltro, an unrivalled Italian captain at the time, defeated and massacred, in one day and one night, a French army of eighteen thousand French and Italian Guelphs who had put them to siege to submit them to the church.
This historical tale is thus dedicated to the honor and pride of the last of the Italian Ghibellines who, refusing to surrender to the force of arms, attacked and defeated, against all the odds, the thousands of soldiers who had besieged them for a year. I conclude by telling you that this book will inevitably lead you to discover many other things that have been forgotten by history, and I gladly offer it for your reading.
Enjoy this rediscovery.