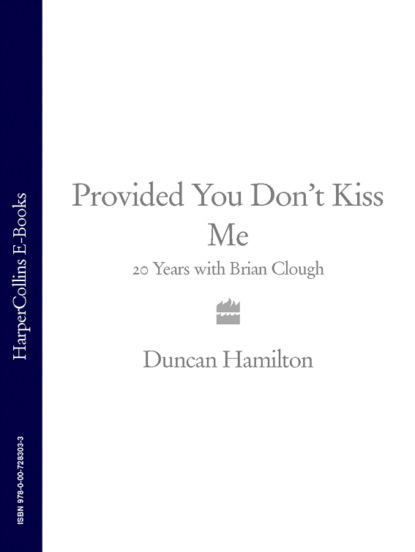 Provided You Don’t Kiss Me: 20 Years with Brian Clough

Look Duncan, you're a journalist. One day you'll write a book about this club. Or, more to the point, about me. So you may as well know what I'm thinking and save it up for later when it won't do any harm to anyone.Duncan Hamilton was there through all the madness, the success, the failures, the fall-outs, the drink, and the crumbling of Brian Clough's heady twenty years as manager of Nottingham Forest. He saw it all. From his first day on the job sitting in Clough's office, a nervous, green sixteen year-old sat opposite one of the self-proclaimed giants of the English game, politely refusing a morning whiskey, he would become an integral part of Clough's empire, and eventually one of his most trusted confidants.From the breakdown of Clough's testy relationship with Peter Taylor, his co-manager and joint founder of Forest's success, through the unrepeatable double European cup triumph, and on into the wilderness of the mid-eighties through which Clough's alcoholism would play an evermore damaging role, Hamilton had access to every aspect of the club, and more remarkably, the man in charge. Here, he paints a vivid portrait of a huge personality, a man with a God-given gift for management and the watertight confidence and ego to stare down his detractors in the media, boardroom and beyond. A man who grabbed life, and most of his players, by the balls and wouldn't let go until he got his way.This is a strikingly intimate portrait, at times sad, at others joyous, in which one of the unforgettable characters of English football is laid bare. But it is also the story of a man's education in the bizarre happenings of the football world, appreciatively guided by the most wonderful, loud-mouthed, big-headed and cocksure teacher of all.