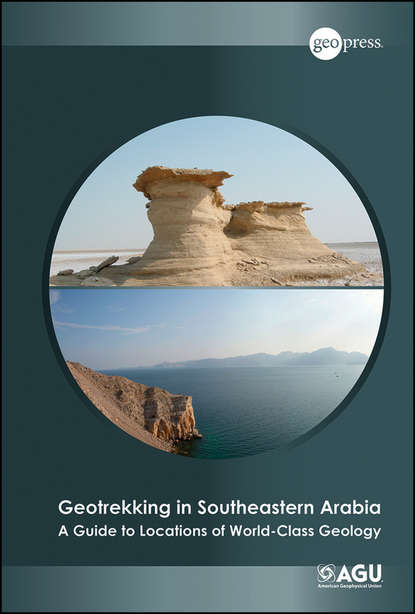 Geotrekking in Southeastern Arabia. A Guide to Locations of World-Class Geology

Published by the American Geophysical Union as part of the Special Publications Series. Geotrekking in Southeastern Arabia presents the world’s most diverse geology and reveals some of the unique rocks that were once covered under shallow seas and are now sub-aerially exposed. This guidebook describes various routes that leads to specific locations for viewing the distinctive and world class geology of the United Arab Emirates and Oman. Each route includes specific directions, satellite images, illustrations, and explanations that can help with locating the outstanding geology of the area. Certain sites preseve the world class ophiolites – a section of the Earth's oceanic curst and the underlying upper mantle that has been uplifted and exposed above sea level and often emplaced onto continental crustal rocks, a unique process of the Earth described by plate tectonics. Some salient features of this guidebook include: – UAE and Oman are situated in the south east coast of the Arabian Peninsula, which is very well known for its vast reserves of oil and natural gas, hence this book is of great interest to exploration geologists – Mountains of the UAE and Oman are the world’s largest and best preserved ophiolite – a slice of the deep ocean crust that has been forced by tectonic forces onto a continental crust – Within the mountains of these regions are sections of the deep Earth, rarely exposed anywhere – pieces of the Earth’s underlying mantle and the lower parts of its oceanic crust – Other characteristic features include deep sea sediments and volcanic rocks that were erupted by submarine volcanoes – Among mineral ores, cpper deposits were commonly formed at ancient, deep sea, hydrothermal vents – Some of the groundwater flowing out of ophiolite rocks reacts with the atmosphere to precipitate calcite and form vast pools of water that appear as blue swimming pools – The shallow land and high evaporation conditions in the western region of the UAE forms giant, salt-lined mudcracks and the growth of gypsum clusters called “desert roses” – Stromatolites, colonies of cyanobacteria that are probably some of the oldest living species on Earth are also very common in this region – Some dunes in UAE rise upto 160 m above evaporative salt plains – Rare occurrence of 100 million-year-old pillow lavas, which form underwater, uniquely preserved as if they erupted yesterday – Many other geologic marvels exist in a region known more for its oil and gas geology