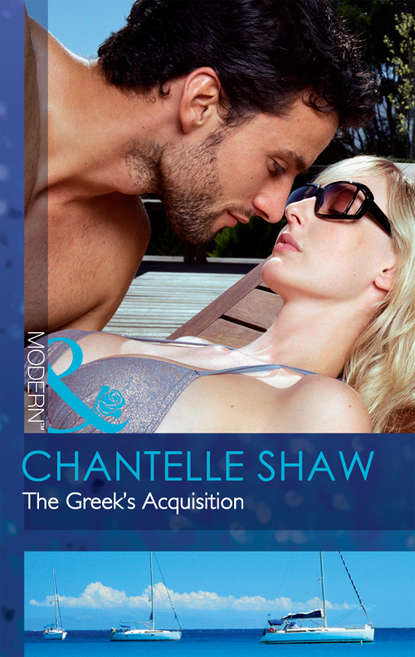 
Out of the corner of her eye she caught sight of a figure striding across the hall and she waited, assuming the man wanted to join the tour. But as he drew closer her heart performed a somersault beneath her ribs.

What was Dimitri doing here? Yesterday had been the third day since she had visited him at his office in Athens. By midnight, when he hadn’t contacted her, she had assumed he had decided not to buy Eirenne, and she had spent all night worrying about how she was going to raise the money for her mother’s treatment.

The rest of her tour group were already climbing the stairs when he halted in front of her. The glint of amusement in his olive-green eyes told her he knew she was shocked to see him, and to her irritation she felt herself blush as if she was still the schoolgirl who years ago had had a huge crush on him. She hated the effect he had on her, but good manners forced her to greet him with a cool smile.

‘Did you want to see me? I’m just about to conduct a tour of the museum, so I’m afraid I can’t talk to you right now, but if you give me your phone number I’ll call you as soon as I’m free.’

‘Don’t let me interrupt you.’ He indicated that she should follow her tour group, and fell into step beside her as she headed towards the stairs.

‘So you realised your dream,’ he murmured.

She gave him a startled glance—and immediately wished she hadn’t made eye contact with him when her heart gave a jolt. He was even more gorgeous in real life than in the image of him that she had been unable to dismiss from her mind for the past three days. She was supremely conscious of his height and his toned, muscular body as he walked beside her. He was wearing a suit but no tie, and the top couple of his shirt buttons were undone to reveal the tanned column of his throat. The dark stubble shading his jaw added to his raffish sex appeal.

Louise choked back a slightly hysterical laugh as she imagined his reaction if she gave in to the crazy urge to reach up and press her lips to the sensual curve of mouth. She bit her lower lip and the sharp pain brought her to her senses. ‘I don’t understand what you mean,’ she said shortly.

‘I remember you studied the history of art at university, and you told me your ambition was to work at an art museum. I think you spent some time as volunteer at the National Gallery in London while you were a student.’

‘I’m sure I bored you to death, talking about my career plans.’

She was embarrassed to remember how unsophisticated she had been at nineteen. No one had ever taken much interest in her before—her mother had always been too busy with her own life. She had been dazzled by Dimitri, and had lapped up his attention like a puppy desperate to please its master, she thought painfully. It was a surprise to hear that he had actually listened to her.

‘I assure you—you never bored me, Loulou,’ he said softly.

His use of her nickname took her back in time—to seven years ago when she had been young and heartbreakingly naïve. She remembered the old house among the pine trees on Eirenne, the feel of warm sunshine on her skin, and Dimitri whispering her name reassuringly as he drew her down onto a bed and slanted his lips over hers. ‘I want you, my lovely Loulou.’

She snapped back to the present. ‘Please don’t call me that. I prefer to use my proper name rather than a childish nickname.’

‘Louise is certainly more elegant,’ he agreed. ‘It suits you.’

Dimitri turned his head and subjected her to an unhurried appraisal, taking in her honey-blond hair swept up into a chignon and the functional navy-blue uniform that all the Louvre’s visitors’ assistants wore. She looked neat, almost demure, with barely any make-up other than a slick of pale pink gloss on her lips. Unlike when she had visited him in Athens, she was not dressed as a femme fatale today, but her plain clothes could not disguise her innate sensuality. Desire uncoiled in Dimitri’s gut and he had to fight the urge to pull her into his arms and kiss her temptingly soft mouth.

Flustered by the hard glitter in Dimitri’s eyes, Louise tore her gaze from him and increased the speed she was walking at so that she could catch up with the group of visitors ahead of her.

‘Well, anyway, after I gained my degree I did a post-grad in Museum Studies, which included a three month placement at the Louvre, and I was lucky enough to be offered a permanent position.’ She frowned as a thought occurred to her. ‘How did you know I work here? I’m sure I didn’t mention it.’

‘I had a private investigator check you out.’

‘You did what?’ She stopped dead and glared at him. ‘How dare you? ’

‘Quite easily,’ he said with a shrug. ‘I needed to be sure you are the legal owner of Eirenne and that you have the right to sell it.’

It was a reasonable explanation, Louise acknowledged grudgingly. But the idea that an investigator had been nosing around in her private life was horrible, and it made her feel like a criminal. Another thought struck her. What if his sleuth had found out about her mother’s illness and learned that Tina’s only chance of survival was to have expensive specialist treatment in America? Had Dimitri discovered why she needed a lot of money as quickly as she could lay her hands on it?

She focused on what he had said a moment ago and looked at him uncertainly. ‘When I didn’t hear from you yesterday I assumed you had decided not to buy Eirenne.’

‘I haven’t made a decision yet. I require a little more time to think about it.’

‘Oh …’ Louise’s breath left her in a whoosh as relief flooded through her.

Dimitri was clearly interested in buying the island—otherwise he would have told her straight that they did not have a deal. The lifeline for her mother which last night had seemed out of reach was still a possibility. She sagged against the wall, struggling to regain her composure, and did not see the intent look he gave her.

‘It infuriates me that the only way I can regain ownership of my birthright, which should never have passed out of the Kalakos family’s possession, is to buy it back,’ he told her harshly. ‘But my grandparents are buried on Eirenne, and my sister is distressed at the prospect of losing it for good. It is for Ianthe’s sake more than anything else that I am still considering your offer, but I need more information regarding the sale. We’ll discuss the details over dinner tonight.’

He hadn’t lost any of his arrogance, Louise thought ruefully. It clearly hadn’t occurred to him that she might not be free tonight. But he was calling the shots. If he had asked her to meet him on the moon at midnight she would have done her best to get there, because he had given her hope that her mother might have a chance of beating the disease that was ravaging her body.

They had reached the Pre-Classical Greek Gallery, where ancient sculptures were displayed on marble plinths. At the far end of the gallery, at the top of a wide staircase, stood the majestic Winged Victory of Samothrace. The group of visitors had paused and were waiting expectantly for Louise to begin the tour.

She glanced at Dimitri. ‘I don’t finish my shift until seven-thirty tonight.’

‘I’ll meet you at eight-fifteen at La Marianne on the Rue de Grenelle. Do you know it?’

Louise had heard of the exclusive restaurant, which had a reputation for serving the finest French cuisine and charging exorbitant prices. It was not the sort of place her salary would stretch to, she thought ruefully.

She turned and walked away from him, fighting an uncharacteristic urge to burst into tears. She rarely cried. Ever since the miscarriage few things had seemed important enough to cry about. But her emotions seemed to be all over the place. Meeting Dimitri again had brought back painful memories.

She wished she did not have to see him again. But perhaps tonight he would agree to buy Eirenne. The sale would be dealt with by their respective lawyers, Dimitri would return to Greece, and maybe, if she tried hard enough, she would forget him, she told herself. But the assurance rang as hollow as her footsteps on the floor of the gallery.

Pinning a smile on her face, she joined her group of visitors and began the guided tour, leading them first to view the paintings in the Grande Galerie. Usually she enjoyed giving tours, but to her dismay Dimitri had joined the group, instead of leaving the museum as she had expected him to do. He made no attempt to talk to her, and appeared to listen intently to the information she gave on various artworks. She tried to ignore him and concentrate on the tour, but she found his presence disconcerting—especially when she glanced at him a couple of times and discovered his olive-green eyes were focused on her