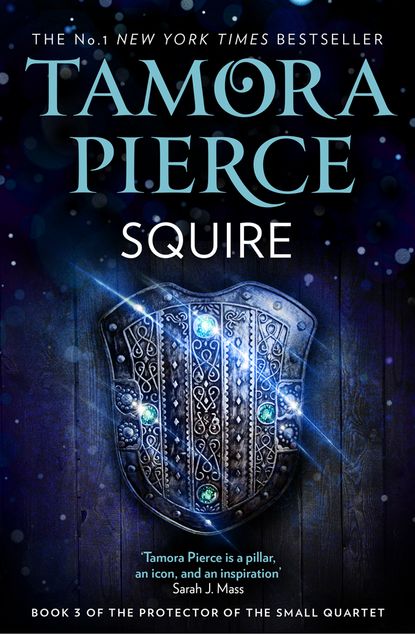 
The dog shook his head.

‘I need to talk to him. You aren’t helping,’ the knight told the dog.

Jump sighed. He walked away, frequently glancing over his shoulder as if to say, ‘I have to let him go?’

‘This is unnatural,’ Greystreak snapped, still warding off sparrows. No matter how quickly he swatted, he never touched them. ‘Take these things away!’

‘It’s rude to single out the squire and ignore the knight,’ Raoul said politely. ‘I didn’t give you permission to address her. Kel, call off the birds.’

Without a word from Kel the birds flew to her. Crown and Freckle perched on her shoulders. The rest lined up on a branch.

Greystreak looked at Raoul. ‘I will give three slaves for her,’ he announced. ‘Two more if she breeds successfully within a year.’

Kel stiffened. Slaves? There were no slaves in Tortall!

Raoul thrust his hands into his pockets, still the picture of goodwill. ‘You forget our customs, Chief Greystreak. Offer all the horses you like, human females are not for sale. And you can’t have heard – I said she is a squire. A knight-in-training. She’s busy. Now, explain to me how you are not at fault for this.’ He jerked his head towards the ruins of the village.

Greystreak spread his hands as his expression slid from greedy to innocent. ‘These young stallions give me no peace,’ he whined. ‘I cast them from the herd. Some females were silly enough to follow them. They are no longer my problem.’

‘You never thought they’d turn on us?’ demanded the headman. ‘Centaur females leave males who can’t give them gifts. If you kicked young bucks out with nothing, how were they to get presents if they didn’t steal?’

Greystreak looked shocked. ‘I assumed their two-legger friends would warn Haresfield, since they live here. Had I known this would happen, of course I would have given warning. I prize the goodwill I have built up.’ He looked at Kel again and sighed before turning to Raoul. ‘Since I know nothing more, I take myself off. I’m sure you will catch these brigands.’ He shook his head woefully. ‘There will be no trade for us here for some time. I shall have to find another market.’

The headman cursed and snapped, ‘Fair-weather friend, aren’t you, Greystreak? When we can do business, you and your people are in and out all the time. When it looks like we’ll be months restoring what we’ve lost, you’re on your way!’

The centaur raised his brows. ‘My friend, I too have females. Without gifts, they attack males.’ He offered his bare forearms for inspection: they were covered with old scars. Our females can be’ – he hesitated, looking at Kel once more – ‘overly spirited.’

She met his gaze levelly. I’ll show you how spirited human females are, you sideslipping sack of ooze, she thought.

Greystreak walked towards the gate, only to halt. Somehow Peachblossom and Raoul’s warhorse, Drum, had pulled free of their pickets. They stood between the centaur and the gate. Black Drum pawed idly at the ground, as casual as if he had stopped to graze in this bare spot. Peachblossom’s head was slightly lowered, his ears flat to his skull. He kept one eye on Greystreak.

The centaur reared to show the geldings his stallion parts, and hissed at them in his own language. Drum flicked one ear forward and the other back, all equine blandness. Peachblossom waited until Greystreak settled onto his fours, then struck, snakelike, his teeth coming together with an audible click as he missed. Greystreak scrambled to get out of range; he nearly fell.

‘Get these slaves out of my way,’ snarled Greystreak.

‘That’s the interesting thing about having the Wildmage about.’ Raoul was relaxed and cheery. ‘Palace animals are changing. Soon most will work for us only if they want to. Some animals are further along, of course.’

More of the King’s Own mounts had freed themselves of the picket lines. They walked through the gate to stand behind Peachblossom and Drum, forming a barrier of horseflesh between Greystreak and escape.

‘I told my lord the other day that horses in particular are showing a smart streak,’ Flyndan added. ‘You’d best be careful, Chief Greystreak. Your own slaves might rebel.’

Greystreak glared at the humans, trembling with rage. ‘Tell them to move,’ he said, his polite mask in tatters. ‘You’ve corrupted them! No gelding defies a stallion, not in the history of horsekind!’

‘I’ll ask them to step aside in a moment,’ Lord Raoul told the centaur. ‘There is one thing. I know you weren’t trying to avoid the issue – I’m sure it just slipped your mind – but under your treaty, you’re required to supply a third of your people to help capture these rogues. I know you’d have remembered in a moment. Our horses just saved you the extra steps.’

Greystreak’s fists clenched. Then he smiled, his mask back in place. ‘Forgive me,’ he said. ‘I was trying to decide who to send with you, and was preoccupied.’

The wagons from the palace arrived shortly before noon. Kel got to work ladling out soup in a mess tent. Raoul stood beside her to issue bread to the diners as they filed by. Only when everyone else had been served did they eat.

‘You won’t get a traditional squire’s education with me,’ he told her between mouthfuls of soup. ‘Serving refreshments in meetings, well, you’ll do that. It’s the best way for you to hear what’s said and who says it. I’ll want your impressions afterwards, so be sharp. But waiting on me hand and foot is plain silly. So’s caring for my horses in the field. For one thing, I like to do it. For another, you’ll be too busy. Tend to your own mounts first.’

Kel nodded. After she swallowed a mouthful, she asked, ‘Why Rider Groups, my lord? Aren’t there enough of us?’ He had led all one hundred warriors of Third Company into the forest that morning, not counting the servingmen.

‘A different tool for a different job,’ explained Raoul. Flyndan, seated across from them, made a face and nodded. ‘We’re conspicuous, in our blues with the pretty silver mail and all,’ Raoul continued. ‘Our horses are big – good for open ground, slow over broken terrain and forest. Third Company does the main sweep, talking to other villages and making noise. The Rider Groups scout on our left and right flanks – our sides. Their little ponies will cover rocky terrain, marshes, and so on. The enemy will be on the move. Once we know where they are, we’ll send half the company around to their rear, to set up a trap. Then we drive ’em into it.’

‘We’ve done it before,’ Dom told Kel. He sat with Flyndan, polishing his empty bowl with a crust of bread. The smile he directed at Kel made her heart turn over, just as Neal’s smile did. ‘We clank around, make a lot of fuss, let the bandits think they’ll always be two steps ahead. Then we close the net and haul them off to royal justice.’

‘They’ll have to sing a sweet song to get out of a hanging,’ Raoul said grimly, picking up his empty dishes.

Kel shuddered: she hated hangings. No matter what the crime was, she saw no malice in those hooded and bound silhouettes dangling against the sky. Worse, to her mind, was the thought that the condemned knew they were to die, that a day and time had been set, that strangers planned each step of their killing.

Flyndan misunderstood her shudder. ‘That’s right. It’s not glamour and glory. It’s hard, mud-slogging work. If you wanted it easy, you should have taken a desk knight.’

‘Stop it, Flyn,’ Raoul said, his voice firm. ‘See her in action before you judge.’

‘I know, she rallied those lads while we handled the spidren nest. You’d think she’d be over this warrior thing by now.’ Flyndan carried his dishes away.

Kel was buttering a roll. She knew what he wanted. ‘I’ve heard it before, my lord.’

Raoul patted her shoulder and took his dishes to the scrubbers.

‘He’s not the easiest second in command, but he’s good at it.’ Kel looked up to meet Dom’s very blue eyes. ‘You need someone a bit stiff to offset my lord. He’s too easygoing, sometimes. Flyn will let up, once he sees this isn’t a hobby for you.’

Kel shrugged. ‘I don’t need to be liked, Dom. I just need to work.’

When she rose with her dishes, he did as well. ‘And you’ve a knack for it. I heard what you did with the spidrens, your first year. And then with the hill bandits, your second summer.’

Kel glanced up at Dom, startled. ‘How did you know about that?’ She handed her bowl, plate, and cup to the dishwashers. One of them was Qasim. He smiled at Kel and Dom, and meekly bore a scolding from the village woman beside him, who said it took more than a swipe with a cloth to get a bowl clean.

‘How did I know?’ Dom asked, and chuckled. ‘My cousin the Meathead, remember? He wrote about both in great detail. I feel sorry for him these days, though.’

‘But he’s got the Lioness for knight-master!’ protested Kel.

Dom grinned down at her. ‘You think that’s fun? Maybe we’re not talking about the same Lioness. The one I know rides with us a lot – my lord’s one of her best friends. She’s the one with the temper. And if Neal’s learned to keep his opinions to himself, it’ll be more than any of us were ever able to teach him.’

Kel started to argue, and changed her mind. Dom was certainly right about Neal.

‘Trust me,’ Dom said, resting a hand on Kel’s shoulder, ‘I bet he wishes right now you had his place!’ He went to help some men carry a heavy beam down the street.

Kel resisted the temptation to rub the spot where Dom’s hand had rested. She needed to find work. Was she some kind of fickle monster, that Dom’s smile and touch could make her giddier than Neal’s had? Was she one of those females who always had to moon over a man? Did other girls’ emotions flop every which way? Lalasa had never mentioned it, if hers did, and she was quite good at explaining such things.