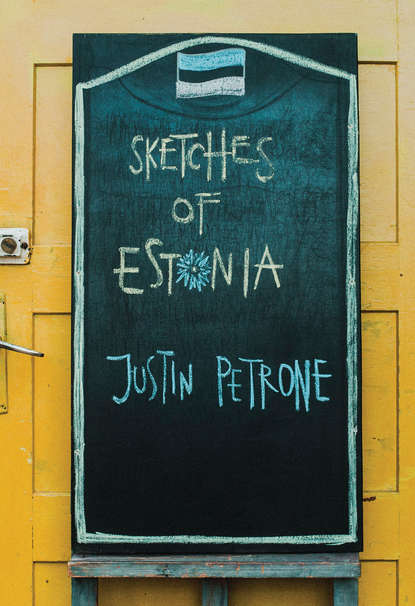 
Maybe it was just a northern thing?

Could you imagine fine poetry and prose rendered by such mysterious words? It could, and Fred Jüssi was actually one of the first people to teach me an Estonian poem. That was back at the Hotel Olümpia, our first meeting, years ago. It was September and already cool and gray, and the only colors were the yellow hair on the heads of the Tallinn students that passed beneath the cafe windows, and the pastel blues and reds of their puffy winter jackets, never really put away. Fred emerged through the cafe doors ruddy faced and wearing a wooly sweater, like an Eskimo in from a seal hunt.

He was a sturdy, solid whale hunter of an old man, like one boulder stacked atop another, with the chiseled face of an Indian Chief, and short wiry white hair that stuck out from beneath his beret.

“Fred!” Epp said and she wrapped her arms around him and pressed her lips to his cheek.

“My pleasure,” I said in Estonian as I stood to shake his hand. “Härra Fred Jüssi, I’m Justin Petrone.”

This caused his sea-gray eyes to recoil back behind those Siberian slits, because Estonians weren’t used to foreigners speaking their language, especially older Estonians who had always thought of their tongue as a sacred secret. Most Estonians’ eyes pulsed with such secrets, as if they all knew some great but unfortunate truth that must never be shared with outsiders.

So Fred sat down and we made small talk and drank coffee and ate yogurty cakes with tiny spoons. Mostly the man spoke to Epp, but when the wind howled outside the glass windows of the cafe, the naturalist held his arms across his chest, announcing in English:

“Justin, it seems that you want very badly to learn our Estonian language, so I want to teach you a line from a poem by the poet Juhan Liiv.”

“Sügisetuul raputab puud...” He rolled the ‘r’ and hit every plosive syllable like a fist, looked up at the ceiling where a fan spun in mysterious circles, and then back at me with those secret-holding eyes. “Care to try it?”

I sat back a bit in my chair and scratched at my collar. “Sügisetuul raputab puud,” I repeated, just like he had said it, and he nodded. I knew the awkward trill of my ‘r’ would never match the grace of his, and that my ‘p’s and ‘b’s were still too different to carry the muddy kick of true Estonian, but I had tried.

“Very good,” Fred Jüssi said. “It means something like, ‘The autumn wind is shaking the trees,’ but it sounds much better in Estonian. Listen. Raputab.” One hand fell into the other. “You can really hear it.”

Fred spent his better days in a forest cabin in Hiiumaa, just listening to the wind or photographing flowers. He would breakfast along streams and dinner behind waterfalls. There were even CDs in our home, Fred’s recordings of birds I had never heard of. The woodchat shrike. The crested tit. Sometimes he would exchange letters with Epp, long, handwritten letters, and I felt that he served her as a kind of advice columnist offering the insight into life lived among the local intelligentsia with all its backstabbing gossip, affairs, and illegitimate children.

Originally, Epp was his editor and Fred was her columnist. But there was a stronger bond there too, and I did wish sometimes that I had my own female septuagenarian pen friend. What if Fred Jüssi’s contemporary, the glamorous actress Eve Kivi (who was famous for having played the sexy nun in the Estonian cult movie The Last Relic) had written those kinds of letters to me?

“Dearest Justin, I strongly advise you not to continue in this direction ...”

Most of the times I encountered Fred, he was sitting down, so I never really had a fixed idea of how tall he was. But to me, Fred was a big man, a boy from Aruba with a face that reminded me of the carved stone deities of Easter Island. I never really saw him smile, never saw his lips curl up or his teeth shine, and could only sense his inner joy or curiosity through his words or the folding of his arms.

When the new, burlap-textured copy of Jäälõhkuja at last appeared, with its pages of long words and effervescent nature photographs, I was dispatched to bring the author his 20 free copies. I took the bus into Tallinn and hailed a taxi at the foot of the Stockmann department store, gave the driver the address in Kadriorg and we sped away. Fred was supposed to wait for me outside, but I wasn’t sure of how I would be able to spot him among all the well-heeled pedestrians with their fine black coats and shopping bags.

In Kadriorg, tall, yellow and red wooden houses jutted out along the streets and into the skies, like the half-finished hulls of wooden ships. The moisture of the close-by sea was always in the air and I relished it – to breathe it in, to be so far from Tartu’s silty river. This is where Fred lived, the place to which he returned after sojourns on the island of Saarnaki or chit-chatting with yellow-breasted buntings and Lapland longspurs. As the cab waited, I searched the faces of the pretty people, women with fox fur coats and white cowboy boots, men with shadowy stubble in sharp dark suits, until I felt the eyes looking back at me. And there he was, with his Amerindian warrior sneer, the eyes of God, standing on the curb in a sweatshirt and sweat pants.

He nodded at me when I approached and we exchanged greetings. We went inside and he made tea.

“So, what kind of tea do you want?” he asked, searching his cabinet. “We have green tea, black tea, chamomile, peppermint. I’ve even got a box of Japanese tea my friend sent me from over there.”

“Let’s try that,” I said, working my eyes around his tiny kitchen. Fred filled the pot with the green Japanese tea and let it sit and I looked at the picture of him and a pretty woman on his refrigerator door. She was older, with gray mixed in among the bangs, and very fine features, but it was those eyes that caught your attention. There was so much life in those eyes. They reminded me of somebody else’s eyes, somebody who was very close to me.

Fred sat down at the table and gestured for me to sit down. Then he poured me some of the Japanese tea his friend had sent him, and we watched the steam rise from the cups, the little flecks of green leaves swirling around in the jasmine water, breathing in that medicinal smell that the tea gives off. Fred supplied honey and I dabbed some in with a spoon and watched its stickiness slide off and dissolve.

“No, no,” said Fred. “You should never put fresh honey into a hot cup of tea. You have to let it sit.”

“Oh, that. Well, Justin, you know, I am getting old, too,” Fred said. “The doctors tell me I have to have heart surgery and I’m not sure if I’m going to make it,” he put one fist up against his chest and let it fall back down to the table. “But that’s how life is. It begins and it ends.” He stared at his tea for a second. “Just think of all the flags I have seen in my long life, this life! First, there was the blue, black, and white Estonian flag,” he held up a finger. “Then came the red Soviet flag, and then the red German flag, and then the red Soviet flag again, and don’t forget about the red and blue Soviet Estonian flag.”

“Oh yeah, I’ve seen that flag. It has the little waves on it. Kind of pretty. Not bad for a Soviet flag.”

“It was okay,” he shrugged. “But then the blue, black, and white Estonian flag came back, and now we have the blue and gold European Union flag and the blue and white NATO flag. What is that? Seven?”

“Or eight, if you count the Estonian one twice.”